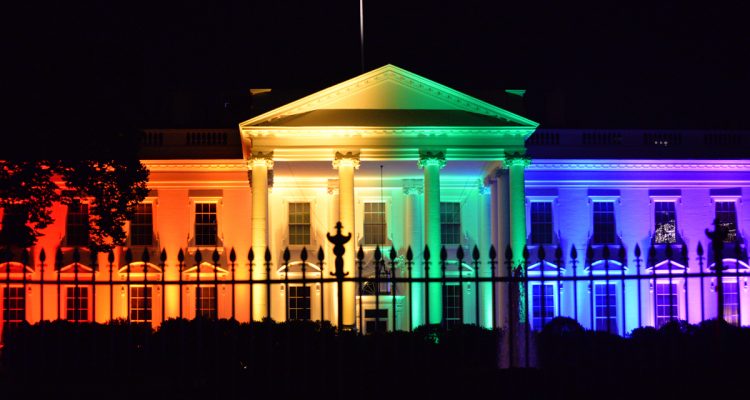 The Biden administration on Tuesday publicly acknowledged the International Day Against Homophobia, Biphobia and Transphobia.

“Jill and I stand in support and solidarity with lesbian, gay, bisexual, transgender, queer and intersex (LGBTQI+) people in the United States and around the world,” said President Biden in a statement the White House released. “We join with Americans across the country to reaffirm our commitment to the ongoing work of upholding human dignity for all people and advancing equality globally.”

Biden in his statement noted there “has been much progress” since the World Health Organization on May 17, 1990, declassified homosexuality as a mental disorder. Biden also highlighted “we continue to witness disturbing setbacks and rising hate and violence targeting LGBTQI+ people in the United States and around the world.”

“This is wrong,” he said. “LGBTQI+ people are entitled to all the rights, opportunities, and protections that belong to every human on this planet. LGBTQI+ people are an essential part of families and communities—teachers, first responders, public officials, doctors, lawyers, front-line workers and friends who enrich and strengthen every single country.”

“And make no mistake: Hateful legislative attacks against members of our own LGBTQI+ community cannot be tolerated in America or anywhere else,” added Biden. “They spur discrimination and can stoke violence. And they are rooted in the same ignorance and intolerance that we see around the world. Hate is hate—and all of us have a responsibility to speak out against hate wherever we find it.”

Secretary of State Antony Blinken on Tuesday issued his own IDAHOBiT statement.

“The United States affirms today, on the International Day Against Homophobia, Biphobia, Interphobia and Transphobia (IDAHOBIT), that the human rights of lesbian, gay, bisexual, transgender, queer and intersex (LGBTQI+) persons are the same human rights to which all persons are entitled,” said Blinken. “As enshrined in Article 1 of the Universal Declaration of Human Rights, ‘[a]ll human beings are born free and equal in dignity and rights.’”

Bliken further noted that “too many LGBTQI+ persons live under the shadow of discrimination, violence and fear.”

“Global data makes clear that the dehumanization of LGBTQI+ persons is systemic, pervasive, and often violent,” he said. “Homophobia, biphobia, interphobia and transphobia are deeply entrenched in societies across the world, including here in the United States. Countless persons are at extreme risk for being themselves.”

Biden shortly after he took office in 2021 issued a memorandum that committed the U.S. to promoting LGBTQ rights abroad.

The administration last June appointed Jessica Stern as the special U.S. envoy for the promotion of LGBTQ rights abroad.

The U.S. Senate earlier this year in a bipartisan vote confirmed Chantale Wong, the U.S. director of the Asian Development Bank, as the first openly lesbian American ambassador. The State Department on April 11 began to issue passports with “X” gender markers.

The State Department on April 28 released a report that details the federal government’s implementation of Biden’s foreign policy memo.

“We remain committed to ending this intolerance. Everyone deserves to live with respect, dignity, and safety,” said Blinken in his IDAHOBiT statement. “The United States affirms that all LGBTQI+ individuals, couples, and their families are valid and valuable.”

Biden in his statement also referred to the report.

“By openly reporting on our own progress, the United States hopes to inspire other governments to take similar action to address the needs of their LGBTQI+ communities,” he said.

“To the LGBTQI+ community, my administration sees you,” added Biden. “We stand with you. And we will continue to defend human rights and dignity, at home and around the world.”

Victor Madrigal-Borloz, the independent U.N. expert on LGBTQ rights, and other U.N. human rights experts in a statement they released on Monday highlighted the plight of LGBTQ people who have been forcibly displaced from their homes.

“With the number of forcibly displaced persons continuing to rise, States, businesses and humanitarian and civil society organizations must invest in developing human rights-based policies and programs that take into full account the intersectional dimensions of forced displacement and sexual orientation and gender identity, fostering stronger collaboration and coordination among all actors responsible for the protection of displaced LGBT individuals,” reads the statement.

“Today I want to thank my incredible team of Insight public organization who still works for LGBTQI+ people in Ukraine, saving life’s (sic) of our community during the war,” tweeted Olena Shevchenko, chair of Insight, a Ukrainian LGBTQ rights group. “We are here for equality.”

Sexual Minorities Uganda in a tweet said IDAHOBiT “is a significant day for the LGBTIQ+ community because it serves as a reminder of the ongoing violence and prejudice that our communities face.”