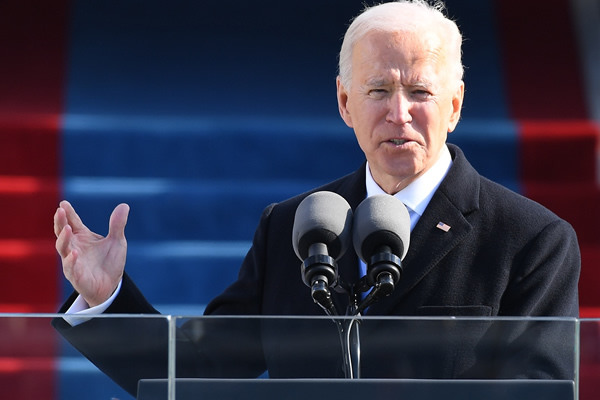 President Biden has signed an executive order that reverses Trump administration policy against transgender military service and prohibits discharges based on diagnoses of gender dysphoria, but stops short of explicitly stating transgender people will be allowed to enlist in the armed forces, according to a fact sheet issued Monday by the White House.

Biden signed the executive order early Monday afternoon at the Resolute Desk in the Oval Office next to Gen. Lloyd Austin, who was recently confirmed as secretary of defense, according to a pool report.

“This is reinstating the position” that “other secretaries have supported,” Biden is quoted as saying.

Biden reportedly added the executive order allows all “qualified Americans to serve their country in uniform.”

The executive order reversing policy instituted by former President Trump, who tweeted in 2017 he’d ban transgender people from the armed forces “in any capacity,” was expected. Biden had told the Dallas Voice as a presidential candidate he’d reverse the policy on Day One of his administration.

Before Trump issued his ban, the Obama administration under former Defense Secretary Ashton Carter has lifted decades-old regulations against transgender military service, prohibiting discharges of service members based on gender dysphoria. Transgender enlistments, however, were put on pause until the next administration.

Trump overrode the changes entirely with a new ban. After his tweet, former Defense Secretary James Mattis subsequently issued a report advising against transgender military service, which the Defense Department then implemented as policy at the direction of Trump.

According to the Biden fact sheet, the executive order will immediately halt any discharges from the armed forces based on gender dysphoria. A 2014 report from the Williams Institute estimated 15,500 transgender adults are serving in the U.S. military, including 8,800 on active duty and 6,700 in the National Guard or Reserves.

But the order is unclear about whether a service members with the diagnosis will be able to serve until they obtain they transition-related care.

Further, the fact sheet doesn’t address whether individuals who aren’t in the military, but seeking to enlist, will be able to accede if they have a diagnosis of gender dysphoria or obtained transition-related care, which were disqualifying under the Trump administration policy.

Finally, the executive order gives the Defense Department and the Department of Homeland Security, which oversees the Coast Guard, a timeframe of 60 days to report on implementation and allows “consultation with the Joint Chiefs of Staff” to achieve the goals of the order.

All in all, the fact sheet indicates the Biden policy will bar involuntary discharges of service members for being transgender and obtaining a diagnosis of gender dysphoria, but whether transgender civilians will be able to enlist in the armed forces is unclear.

The 60-day period to produce a report on the implementation changes, in any way, flies in the face of a memo issued last year by the San Francisco-based Palm Center, which found Trump’s policy could be reversed in 30 days.

Aaron Belkin, director of the Palm Center, nonetheless maintained in a statement to the Washington Blade on Monday he has faith the executive order would lead to inclusive service for transgender people.

“Today is a historic day,” Belkin said. “President Biden pledged that he would lift Trump’s transgender ban at the beginning of his administration, and that is exactly what he did. The restoration of inclusive policy will promote military readiness, and is a victory of evidence-based policy over prejudice.”

Also unclear from the executive order is whether the U.S. military will draw on government funds to pay for transition-related care, including gender reassignment surgery, for transgender service members.

The White House didn’t immediately to request to the Washington Blade’s request to comment on whether the Biden policy would ultimately allow transgender civilians to enlist in the armed forces.

LGBTQ advocates, however, were effusive in their praise for executive order, which said they demonstrates Biden’s supports the LGBTQ community in contrast to years of attacks under Trump.

Alphonso David, president of the Human Rights Campaign, said in a statement the executive order, coupled with the directive implementing the Supreme Court’s decision against anti-LGBTQ discrimination, demonstrates Biden is making good on his campaign promises to LGBTQ people.

“The greatest military in the world will again value readiness over bias, and qualifications over discrimination,” David said. “The order follows the Biden administration’s commitment to LGBTQ equality, including the issue of a substantive LGBTQ executive order on Day One that implements the Supreme Court’s Bostock ruling.”

“The American people, military leaders, and service members themselves, all overwhelmingly support transgender military service,” Ellis said. “They know that brave trans patriots have served throughout history and continue to serve honorably and capably, defending our country. By prioritizing an end to this discriminatory, unjustified ban, President Biden has fulfilled a campaign promise and is making our military stronger and more unified.”

The anti-LGBTQ Family Research Council, however, condemned the move in a statement as diverting the military away from its mission.

“In one of his first acts as commander-in-chief, President Biden is redirecting the military’s focus from where it has been and where it belongs — fighting and winning wars,” Tony Perkins, president of the Family Research Council, said. “Political correctness doesn’t win wars, but the president is indulging dangerous and unproven theories that have the potential to undermine national security.”