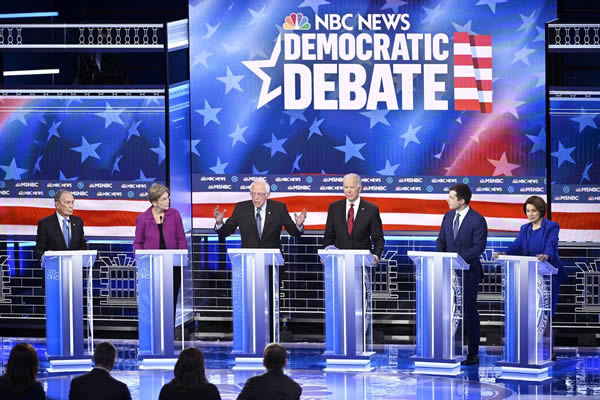 With Michael Bloomberg ascending in the polls, fellow candidates for the Democratic presidential nomination pummeled him — and in some cases each other — in a bloody debate Wednesday night.

Across the stage in Las Vegas, candidates seeking to thwart Bloomberg hammered him on the “stop-and-frisk” policy, allegations of sexual misconduct and discrimination and being a billionaire seeking to buy the presidency. In response, Bloomberg delivered responses that were cerebral at best, but largely seemed disengaged and lacked a presence on stage.

Meanwhile, the private feud between Pete Buttigieg and Sen. Amy Kloubuchar (D-Minn.) escalated on the stage and Buttigieg turned his attacks primary toward Sen. Bernie Sanders (I-Vt.), with whom he has split wins in Iowa and New Hampshire.

Meanwhile, President Trump, whom each of the candidates are running to remove from the White House, came off comparatively unscathed.

Here’s a breakdown of some of the exchanges on the stage Nevada, which is set to hold its caucus in the Democratic primary on Saturday:

Everyone vs. Michael Bloomberg

Bloomberg faced the wrath of each of the candidates from the start of the debate, when Sen. Elizabeth Warren (D-Mass.) hammered him over recent media reports of sexist comments he made toward women in his business as well as his policies as New York City mayor.

“So I’d like to talk about who we’re running against, a billionaire who calls women ‘fat broads’ and ‘horse-faced lesbians,’” Warren said. “And, no, I’m not talking about Donald Trump. I’m talking about Mayor Bloomberg. Democrats are not going to win if we have a nominee who has a history of hiding his tax returns, of harassing women, and of supporting racist polls like redlining and stop and frisk.”

Later in the debate, Warren tried to compel Bloomberg to say on stage he’d release women workers from non-disclosure agreements they made over sexual harassments, but pulled for excuses to refuse.

“We have very few non-disclosure agreements,” Bloomberg said, ignoring questions from Warren on how many agreements there are.

“None of them have accused me of doing anything other than maybe they didn’t like a joke I told,” Bloomberg said to guffaws in the audience, adding those agreements “are between two parties that wanted to keep it quiet, and that’s up to them. They signed those agreements and they’ll live with them.”

In response to the stop-and-frisk policy, former Vice President Joseph Biden laid into Bloomberg, saying the Obama administration had to intervene.

“The fact of the matter is, he has not managed his city very, very well when he was there,” Biden said. “He didn’t get a whole lot done. He had stop and frisk, throwing close to 5 million young black men up against a wall. And when we came along in our administration, President Obama, and said we’re going to send in a moderator to — a mediator, stop it, he said that’s unnecessary.”

As criticism of stop-and-frisk continued, Bloomberg responded he could only apologize so many times and something needed to be on criminal justice without a offering a clear solution.

“I’ve sat, I’ve apologized, I’ve asked for forgiveness, but the bottom line is that we stopped too many people, but the policy — we stopped too many people,” Bloomberg said. “And we’ve got to make sure that we do something about criminal justice in this country. There is no great answer to a lot of these problems. And if we took off everybody that was wrong off this panel, everybody that was wrong on criminal justice at some time in their careers, there’d be nobody else up here.”

As for criticism of being a billionaire, Bloomberg was faced with questions from debate moderators about releasing his tax returns and he delivered a Trump-esque response on that being a cumbersome process, but they will come forward.

“It just takes us a long time,” Bloomberg said. “Unfortunately, or fortunately, I make a lot of money and we do business all around he world and we are preparing it. The number of pages will probably be — thousands of pages. I can’t go to TurboTax, but I filed my tax return every year for 12 years in City Hall. We will put out this one. It tells everybody everything they need to know about every investments that I make and where the money goes.”

In the aftermath of sharing first and second place in the Iowa and New Hampshires, Buttigieg seemed to think it was best to target his criticism on stage to Sanders.

Accusing Sanders of “trying to burn this party down” and being the most polarizing candidate on stage, Sanders defended himself as saying this role has been to speak out for working Americans.

“If speaking to the needs and the pain of a long neglected working class is polarizing, I think you’ve got the wrong word,” Sanders said. “What we are trying finally to do, is to give a voice to people who have after 45 years of work are not making a nickel than they did 45 years ago.”

Making a criticism of Bloomberg, Sanders named him as she said Americans are “sick and tired of billionaires like Mr. Bloomberg seeing huge expansions of their wealth while a half a million sleep out in the sleep tonight.”

“All we are saying Pete is maybe it’s time for the working class of this country to have a little bit of power in Washington rather than you’re billionaire campaign contributors,” Sanders said.

Buttigieg wouldn’t let up. Amid accusations his army of “Bernie Bros” have been attacking people with misogynistic comments on social media and the Culinary Union of Nevada for not giving the candidate an endorsement, Buttigieg posited Sanders should have to own up to those followers.

“We can actually empower workers and lift wages without further polarizing this country, and we can build a movement without having legions of our supporters online and in person attacking Democratic figures and union leaders alike,” Buttigieg said.

Sanders responded by saying assertions of his hostility from his followers is overblown.

“We have over 10.6 million people on Twitter and 99.9 percent are decent human beings, are working people, are people who believe in justice, compassion and love,” Sanders said. “And if there are a few people who make ugly remarks, who attack trade union leaders, I disown those people. They are not part of our movement.”

The most serious fireworks on stage were between Buttigieg and Klobuchar, who could hardly restrain his visible detest for the former South Bend mayor, whom she has made veiled criticisms about being too inexperienced.

When Buttigieg criticized for not knowing the name of Mexico President Andrés Manuel López Obrador, Klobuchar could be seen taking great offense.

“Are you trying to say that I’m dumb?” Klobuchar said. “Or are you mocking me here, Pete? I said I made an error. People sometimes forget names.”

When Buttigieg wouldn’t let up, criticizing her for voting for Trump’s head of U.S. Customs & Border Protection, who was in charge of the family separation policy, two-thirds of Trump judicial nominees and making English the national language, Klobuchar could be seen making a nasty face retraining her anger as she wrote something down on her podium. Then she delivered a stinging response.

“I wish everyone was as perfect as you, Pete, but let me tell you what it’s like to be in the arena,” Klobuchar said.

Klobuchar corrected Buttigieg saying she hadn’t voted for two-thirds of Trump judicial nominees. (Her campaign says it’s about half, but they include a judicial pick who once derided LGBTQ rights as “social policy.”

“When it comes to immigration reform, the things that you are referring to, that official that you’re referring to was supported by about half the Democrats, including someone in this room,” Klobuchar said. “And I will say his, he was highly recommended by the Obama officials. You know why? Because Trump had so few career point.”

Klobuchar said she “did not one bit” agree with the family separation policy and pledged in her first 100 days in office to change the policy immediately.

Meanwhile, as President Trump held a rally in Las Vegas on the same evening, Democrats comparatively avoided him on stage compared to their attacks on each stage.

Bloomberg pointed that out in probably in best line of the night amid the damage the candidates were inflicting on each other on stage.

“I can’t think of ways that would make it easier for Donald Trump to get re-elected than listening to this conversation,” Bloomberg said.

However, Bloomberg immediately threw away his good standing from that line by suggesting his opponents were proposals were along the lines of communism.

“We’re not going to throw out capitalism,” Bloomberg said. “We tried that. Other countries tried that. It was called communism and it just didn’t work.”

Klobuchar also lamented toward the end of the debate the lack of attention paid to Trump.

“We have not been talking about Donald Trump,” Klobuchar said. “Let’s just talk about Donald Trump because he signed that tax bill that helped the wealthy and he went down to Mar-a-Lago and he said to all his friends, you just got a lot richer.”

Kayleigh McEnany, the Trump campaign’s national press secretary, chided Democrats in a statement for their infighting in the debate and predicted he’d come out victorious against any one of the candidates.

“The Democrat Party is in the midst of a full-scale meltdown,” McEnany said. “Americans are watching the party of JFK be torn apart by anti-job socialists and anti-worker globalists who want to control every aspect of Americans’ lives. This train wreck is nothing compared to what they would do to our country. None of these candidates will be able to go toe to toe with President Trump in November.”