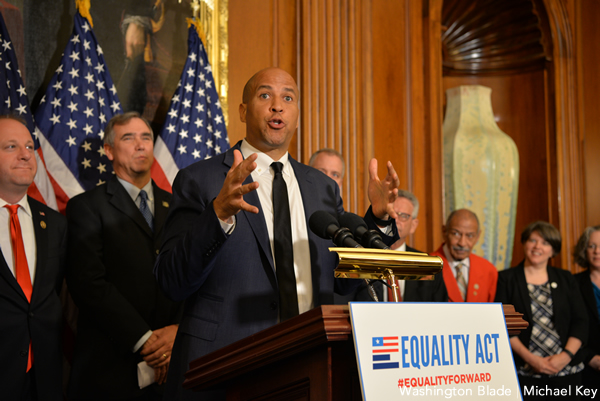 Speaking to a crowd of more than 300 voters, Booker made the remarks in response to a question from transgender woman who asked him what he’d do to protect LGBT rights as president, according to the Associated Press.

“When I am president of the United States, right away I will end this ridiculous, insulting, un-American ban on transgender Americans serving in the military,” Booker is quoted as saying, reportedly to cheers from the crowd.

The Trump administration last week unveiled its plan to initiate its transgender ban on April 12 in the aftermath of courts lifting four orders that previously barred the U.S. military from enforcing the policy.

Other Democratic contenders, including Booker himself, have condemned Trump’s ban on transgender service, but the New Jersey Democrat now stands out for pledging to reverse the policy “right away” upon election to the White House.

Aaron Belkin, director of the San Francisco-based Palm Center, commended Booker in a statement called on other presidential candidates to make similar commitments.

“Sen. Cory Booker has listened to the considered judgment of all five military service chiefs and has taken a strong stand on the need to rid our military of discrimination on day one of his tenure if elected,” Belkin said. “This is the kind of leadership needed to ensure that politics doesn’t stand in the way of military readiness. We look forward to hearing where other candidates stand on this key issue of immediate reversal.”