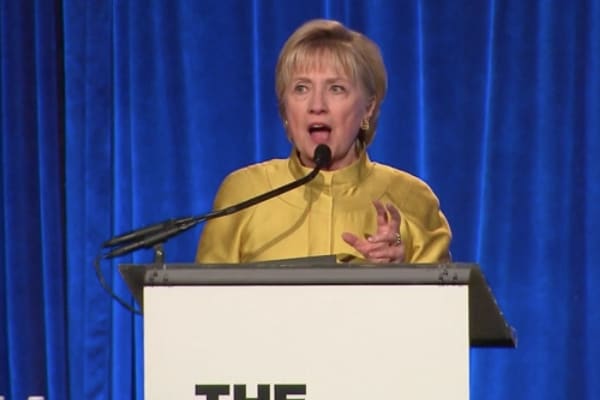 Hillary Clinton lambasted President Trump on Thursday evening for actions his administration has taken against LGBT rights as the 100-day mark of his time in office approaches, saying gains made by the LGBT community “may not be as a secure as we once expected.”

Clinton, the 2016 Democratic presidential nominee who has recently emerged from shadows after her loss, made the remarks at The Center for the LGBT community in New York City, which honored her with “The Trailblazer Award” for her work to advance LGBT rights.

During her remarks, Clinton said the LGBT community may have to face the fact that Trump may never lead on LGBT issues given the actions seen this far from his administration.

“We’ve learned something important, that the progress that we fought for, that many of you were on the front lines of, and that we’ve celebrated, and maybe even taken for granted may not be as a secure as we once expected,” Clinton said.

Clinton criticized Trump for his rollback of guidance ensuring protections in schools for transgender students, saying her “heart broke” when she learned of it. She also assailed Trump’s proposed rollback of HIV and AIDS research funds in his budget.

“Some of the changes that we’re seeing may seem small, but they matter a great deal if you’re the person affected,” Clinton said. “For example, whether or not you’re counted in the Census. Others carry historic significance, like the future of the Supreme Court.”

With LGBT groups opposing the confirmation of Trump’s nominee Mark Green as Army secretary based on his anti-trans views, Clinton criticized him for being an “outspoken opponent” of LGBT rights.

Amid reports of gay “concentration camps in the Russian semi-autonomous Republic of Chechnya,” Clinton called on the Trump administration to seek more forcefully an end to the alleged human rights abuses.

“And it is not just here in our country that we’re seeing clouds gathering on the horizon,” Clinton said. “In recent weeks, we’ve heard terrifying accounts from Chechnya of gay and bisexual men being taken from their homes and families, tortured and even killed. And when government authorities were confronted with these reports, their response was chilling: They said you cannot arrest and repress people who do not exist. The United States government, yes, this government, should demand an end to persecution of innocent people across the world.”

With audience members applauding her criticism of Trump, Clinton urged them to remember their anger during the mid-term elections in 2018.

“I know the election hit a lot of us hard,” Clinton said with a wry smile. “But I can tell you this: Even when it feels tempting to pull the covers over your heads, please keep going. When you feel a little down, a good friend or a loved one says, ‘Quit yelling at the television set,’ just remember, we need to resist, insist, persist and enlist, and make sure our voices and our votes count.”

As secretary of state, Clinton took the lead on making international LGBT rights part of U.S. foreign policy, declaring in a 2011 speech in Geneva “gay rights are human rights.” Clinton has faced criticism for not declaring support for same-sex marriage until 2013, months after she left the Obama administration.