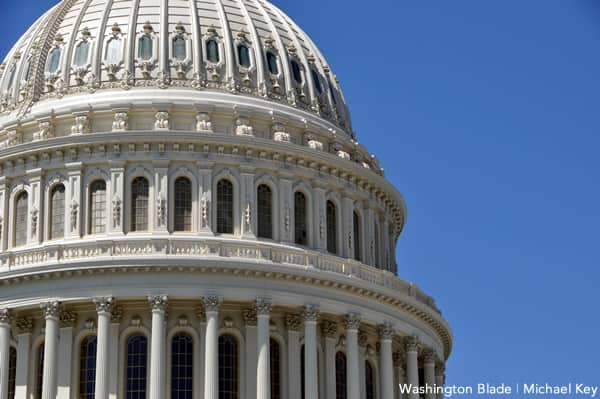 The Congressional Black Caucus last week announced it has created an emergency Task Force on Black Youth Suicide and Mental Health that will address what it calls a growing problem of suicide and access to mental health care among black youth, including black LGBT youth.

The CBC officially launched the new task force at an April 30 news conference at the House Rayburn Office Building on Capitol Hill.

Immediately following the news conference, the task force held its first hearing that included testimony by experts on the subject of black youth and mental health issues. Among those who testified was David Johns, executive director of the National Black Justice Coalition, a D.C.-based LGBT advocacy organization.

Watson Coleman, Johns, and others who spoke at the news conference and the hearing mentioned the recent death by suicide of several black teenagers that have been widely reported in their home communities. Among them was 15-year-old Nigel Shelby of Huntsville, Ala., who took his own life after being bullied and harassed at school for being gay.

Another case mentioned was that of McKenzie Adams, a 9-year-old girl also from Alabama, who authorities say took her own life after being subjected to racist bullying and taunts by classmates telling her to kill herself.

“High-profile cases, like the deaths of McKenzie Nicole Adams and more recently Nigel Shelby, demonstrate how difficult it is to categorize the circumstances that are taking our children’s lives – there are elements of race, trauma, of socioeconomic status, of sexual orientation and gender identity and many more issues at play,” Watson Coleman said.

“Today we begin the work of identifying the causes for this crisis, and how to formulate those solutions,” she said. “Over the next several months, in addition to events like this in Washington, D.C., we hope to bring what we learn to communities across the country, connecting parents and other community leaders to the knowledge and tools to be the ‘first responders’ who identify students at risk and get them the help they need.”

In a statement released at the news conference, the Congressional Black Caucus noted that a 2018 report published by the American Medical Association journal Pediatrics found that the rate of suicide for black children between the ages of 5 and 12 in recent years has exceeded that of white children. The report also found that more than a third of elementary school-aged suicides involved black children.

“The task force will seek to identify causes and solutions, and will empower a working group of academic and practicing experts led by Dr. Michael Lindsey and the McSilver Institute for Poverty Policy and Research at New York University, with the goal of developing and producing a report from the task force by the end of 2019,” the statement says.

Johns is among those who will serve on the working group. In addition to leading the National Black Justice Coalition, he is a former elementary school teacher, former congressional staffer, and is currently a doctoral student at Columbia University’s Teacher’s College.

He told the Washington Blade he is confident that the task force, with the full support of the Congressional Black Caucus, will address issues and seek solutions to LGBT youth suicide, especially suicide and mental health issues related to LGBT youth of color.

In his testimony at the April 30 hearing, Johns pointed to data showing that nearly 80 percent of LGBT teens report feeling depressed and that LGBT youth experience violence and bullying nearly twice as much as youth who identify as or are presumed to be heterosexual.

Johns told the Blade that among the objectives he will push for in the working group and for the task force is cultural competency training for teachers and school administrators to ensure that students who are racial minorities and LGBT students are treated in a welcoming way at school.

He said mistreatment in schools of students of color and LGBT students, including bullying, is widespread throughout the country, including in so-called “progressive” areas like D.C.

“What we need most is for every teacher who stands in front of a student to have the kind of cultural competence that’s required in order to create spaces where everybody feels supported,” he said.