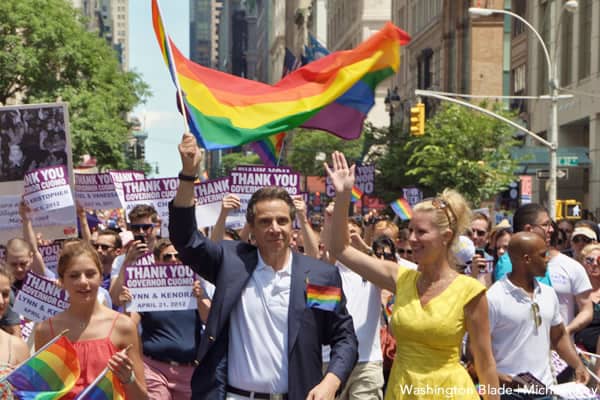 The governor penned his name to the legislation at a signing ceremony at the New York City LGBT Community Center with a U.S. flag, a New York state flag, a rainbow Pride flag and a transgender flag in the background in the same year as the 50th anniversary of the 1969 Stonewall riots in New York City.

The two pieces of legislation became law thanks to new Democratic control the New York State Senate. Democrats took control of the chamber for the first time in a decade in the 2018 “blue” wave election, which allowed the bills to pass that chamber earlier his month for the first time.

The ban on anti-transgender discrimination, known as the Gender Expression Non-Discrimination Act, or GENDA, amends the New York Human Rights Law to ban discrimination on the basis of gender identity in employment, housing, public spaces and education.

In his remarks before signing GENDA, Cuomo referenced the recent decision by the Supreme Court to allow President Trump’s ban on transgender people in the military to go into effect.

The fight to enact GENDA in New York was a 16-year battle. Previously, GENDA was repeatedly passed in the New York Assembly, but never was approved in the Senate. This year, after the Assembly had approved a total of 11 times, the Democratic-controlled Senate finally passed the transgender protections.

Masen Davis, CEO of Freedom for All Americans, said in statement the signing of GENDA is a “long-awaited victory [that] sends a strong message that transgender people are worthy of every equal protection under the law.

“As we celebrate today in New York, we are also reminded that we have our work cut out for us: Thirty states nationwide still lack comprehensive and explicit protections for LGBTQ people under state law, and we won’t stop until every LGBTQ American is protected by fully comprehensive laws that cannot be trumped by those seeking to erase us,” Davis said.

Cuomo touted the progress New York has made on LGBT rights, including passage of marriage equality in 2011, in his remarks before signing the bill.

“There is no state that has been more aggressive in advocating and achieving rights and acceptance for the LGBTQ community than the state of New York,” Cuomo said. “No state has done what we have done. First big state to pass marriage equality and we changed the dialogue of the nation because of your work. We stopped reimbursement for conversion therapy and called it the farce that it is. 2015, we took an executive action that said no discrimination against a person on the basis of a gender identity, period. And today we’re going to sign it into law.”

Also commending Cuomo for signing the LGBT bills and making those protections statutory in New York was Chad Griffin, president of the Human Rights Campaign.

“Today, with Governor Cuomo’s signature, New York has made bold, historic progress by making GENDA the law of the land and banning the abusive and life-threatening practice of so-called ‘conversion therapy’ on LGBTQ youth,” Griffin said in a statement. “These laws will literally save lives, and their passage would not have been possible without the tireless work of advocates and allies across New York over the last decade.”