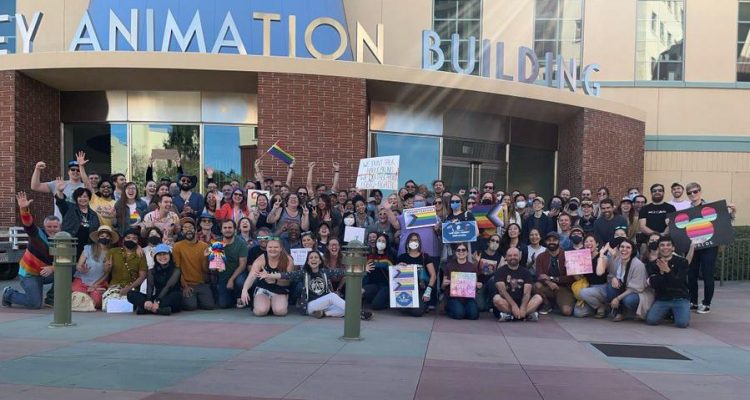 LGBTQ+ Walt Disney Company employees and their allies put on a “full stage” walkout Tuesday at various corporate locations across the U.S. to protest what they see as a “lame” and “inadequate” stance taken by the company and its CEO Bob Chapek to the so-called “Don’t Say Gay” bill in Florida.

From Florida to California, the walkouts were scheduled from 8 a.m. to 6 p.m. Tuesday in accordance with the employees’ time zone, according to the “Disney Do Better Walkout” webpage, which organizers have used to stage walkouts during the last week on employee’s 15-minute break period.

For the “full stage” walkout Tuesday, organizers noted: “You are protected to act while on break for the daily break walkouts, but the full scale walkout that will take place on Tuesday March 22nd is not a legally protected action. Take your own situation into account before choosing to participate.”

The employees are protesting Chapek’s response to Florida’s so-called “Don’t Say Gay” bill, which they say “utterly failed to match the magnitude of the threat to LGBTQIA+ safety represented by this legislation.” After widespread criticism for declining to speak out against the legislation, Chapek ultimately apologized, publicly opposed the measure, paused all political donations in Florida and urged Republican Gov. Ron DeSantis to reject the bill in a phone call.

“I truly believe we are an infinitely better and stronger company because of our LGBTQ+ community. I missed the mark in this case but am an ally you can count on—and I will be an outspoken champion for the protections, visibility, and opportunity you deserve,” he said in a memo to the company’s LGBTQ+ and ally employees.

The Florida Senate passed H.B. 1557 at the beginning of the month, sending it to the desk of DeSantis, who has signaled support for the legislation. DeSantis has yet to take action on the bill. The measure, titled “Parental Rights in Education,” would ban classroom instruction about sexual orientation and gender identity in grades K-3, while “age-appropriate” teaching would be allowed in older grades – though it is not clear what is considered “age-appropriate.”

In Burbank, California, Disney employees chanted, “say gay,” as they marched down the sidewalk, according to a video posted to CNBC Field Producer Steve Desaulniers’ Twitter.

Meanwhile, a post from a Disney Animation Studios employee in Bay Lake, Florida, showed a group of protestors holding rainbow Pride flags and signs – one that read, “We don’t talk about Bruno; we do talk about LGBTQ+ rights,” referencing the hit song from the 2021 Disney movie “Encanto.”

“Supporting our fellow Florida co-workers and LGBTQIA+ community. Solidarity,” tweeted Rebecca Perez, an animator for Disney who has worked on several films, including “Encanto.”

With the nationwide walkouts, some of Disney’s biggest brands supported the LGBTQ+ community in statements posted to social media Tuesday.

“To ALL who come to this happy place, welcome,” Disney Parks posted on its Instagram. “Disney Parks, Experiences and Products is committed to creating experiences that support family values for every family, and will not stand for discrimination in any form. We oppose any legislation that infringes on basic human rights, and stand in solidarity and support our LGBTQIA+ Cast, Crew, and Imagineers and fans who make their voices heard today and every day.”

ESPN, another Disney brand, also posted to social media in solidarity with the LGBTQ+ community.

“ESPN believes in inclusivity and denounces legislation and actions across the United States that infringe on any human rights. We stand with our LGBTQIA+ colleagues, friends, families, and fans,” its account said. “We’ll continue to partner with organizations that support the LGBTQIA+ community, be accountable where we fall short of expectations, and never stop telling stories about LGBTQIA+ athletes.”