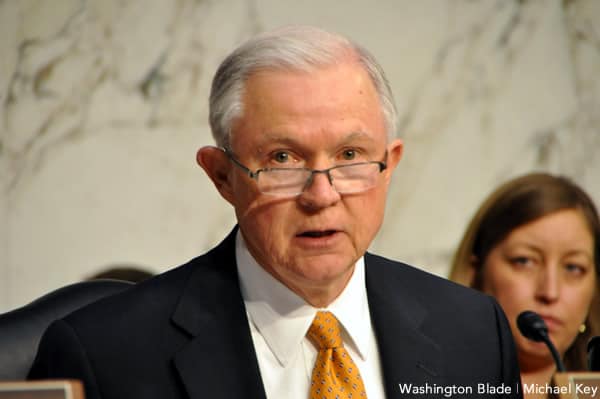 Although North Carolina replaced anti-LGBT House Bill 2 with a law that critics say still enables anti-LGBT discrimination, the U.S. Justice Department has withdrawn the lawsuit against the state filed last year under the Obama administration.

“In light of the passage of North Carolina Session Law 2017-4, House Bill 142, and pursuant to Fed. R. Civ. P. 41, the Parties in the above-captioned action hereby stipulate that all claims or causes of action against Defendants and all counterclaims against Plaintiff which were the subject matter of this lawsuit are hereby dismissed with prejudice,” the notice says.

After North Carolina Gov. Roy Cooper signed into law the replacement measure for HB2, whether the Justice Department would continue the lawsuit it filed against the state over the initial law was in question. As of last month, a Justice Department said the U.S. government was “reviewing its litigation posture” in the aftermath of the HB2 replacement.

Lynch’s lawsuit alleged HB2, which barred cities from enacting pro-LGBT ordinances and transgender people from using the restroom consistent with their gender identity, contravenes federal law. The Justice Department alleged the law violated Title VII of the Civil Rights Act of 1964, Title IX of the Education Amendments of 1972 and the Violence Against Women Reauthorization Act of 2013.

The deal Cooper signed, House Bill 142, replaces HB2 with a measure that LGBT advocates say is a bait-and-switch attempt giving the appearance of repeal while doubling-down on discrimination.

HB 142 prohibits state agencies, municipalities and the University of North Carolina from the “regulation of access” to bathrooms, locker rooms and showers unless they have the legislature’s permission. It also bans municipalities until 2020 from enacting LGBT-inclusive nondiscrimination measures that would apply to private businesses or public accommodations.

The withdraw of DOJ’s lawsuit in the aftermath of the switch is consistent with Sessions’ actions against transgender rights since his confirmation as U.S. attorney general. In fact, the Justice Department last month nixed its request for a preliminary injunction against HB2 in favor of an existing injunction against the law that was significantly more limited and applied only to plaintiffs in a separate lawsuit.

Jon W. Davidson, legal director for Lambda Legal, said in a statement the Justice Department is using North Carolina’s new law as an excuse to withdraw the lawsuit even though the new statute still enables discrimination.

“Here is yet another instance of the Trump administration and Attorney General Jeff Sessions withdrawing the federal government’s support from transgender individuals, and they are using the fake repeal of HB2 as cover,” Davidson said. “Sadly, this was not unexpected, now that anti-transgender forces are in charge of the Departments of Justice and Education. Once again, the Trump administration continues to abandon transgender Americans.”

Although the Justice Department may be reviewing its position now that HB2 has been replaced, that isn’t stopping LGBT legal groups who also filed a lawsuit against HB2 from continuing with their challenge.

The trio of groups — the American Civil Liberties Union, ACLU of North Carolina, and Lambda Legal — have declared their lawsuit, which includes claims for the damages inflicted by HB2, will continue, and they’ll seek to amend the lawsuit to challenge HB142 as well.

James Esseks, director of the ACLU’s LGBT Project, said in a statement that LGBT legal groups will press on in North Carolina even though the Justice Department has abandoned the fight.

“The Trump Administration may want to use the fake repeal of HB 2 as an excuse to further turn their backs on the transgender community, but the rest of us aren’t going to give up that easily,” Esseks said. “We’ll continue this fight as long as it takes to truly strike down this disastrous law for good.”

The lawsuit the LGBT legal groups filed against North Carolina, Carcaño v. McCrory (now known as Carcaño v. Cooper), is on hold until April 28, when a status report is due before the trial court in the aftermath of the enactment of the replacement law to HB2.

Tara Borelli, counsel at Lambda Legal’s southern regional office and the attorney representing the plaintiffs in the case, told the Washington Blade the withdrawal of the DOJ lawsuit will have no impact on the litigation filed by LGBT legal groups.

Other anti-transgender actions the Justice Department has taken under Sessions are the withdrawal of school guidance assuring transgender kids have access to the restroom consistent with their gender identity and missing a deadline to appeal a court injunction against an Obamacare rule barring anti-trans discrimination in health care. President Trump himself has been accused of weakening LGBT legal protections in the workforce by undoing President Obama’s Fair Pay & Safe Workplaces Executive Order.

Borelli said the withdrawal of the DOJ lawsuit against North Carolina “continues a pattern of the federal government continuing to abandon transgender individuals,” citing among other things the decision by Sessions and Education Secretary Betsy DeVos to rescind the transgender guidance.

“This is no surprise given the anti-transgender forces in charge of the Departments of Justice and Education, but it is very disappointing,” Borelli said.