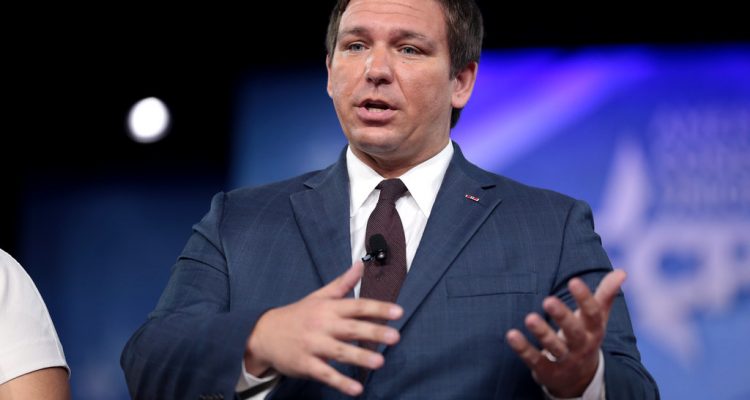 A legal challenge to the "Don't Say Gay" bill may emerge shortly after Gov. Ron DeSantis signs the measure. / "Ron DeSantis" by Gage Skidmore is marked with CC BY-SA 2.0.

With Ron DeSantis expected to sign the “Don’t Say Gay” bill any day now, legal experts are already seeing myriad ways to challenge the measure in court from multiple angles under federal law and the U.S. Constitution — and a lawsuit may emerge shortly after the Florida governor pens his name to the measure.

Legal challenges could emerge given the measure’s impact on LGBTQ students and families as well as LGBTQ teachers under the federal civil rights law on employment and education, such as Title VII of the Civil Rights Act of 1964 or Title IX of the Education Amendments of 1972. Cases could be made under the U.S. Constitution, experts say, given arguable threats to freedom of speech under the First Amendment as well as the singling out of LGBTQ families under the Equal Protection Clause in the Fourteenth Amendment.

Christopher Stoll, senior staff attorney with the National Center for Lesbian Rights, said he thinks “it’s almost certain that the bill will be challenged if it becomes law” and in terms of timing, pro-LGBTQ legal groups “are certainly prepared to do that if the bill is signed.”

“I think it raises a number of issues, but the primary ones are Equal Protection and First Amendment,” Stoll said. “This bill singles out LGBTQ families as being so shameful that they need to be excluded from the classroom in a way that other families are not, and that has an obvious discriminatory effect on children, same-sex couples, and other LGBTQ families.”

Other pro-LGBTQ groups that have brought legal challenges to anti-LGBTQ measures in the courts are holding their cards close to their vest on potential lawsuits against the “Don’t Say Gay” bill. The American Civil Liberties Union and Lambda Legal didn’t respond to a request to comment.

Key portions of the “Don’t Say Gay” bill, titled HB 1557, reveal the potential penalty for the slightest hint of talk about LGBTQ kids and families in schools, therefore the potential for challenging the measure in court as a discriminatory law. The possibilities for legal challenges could be seen as a warning to DeSantis signing the “Don’t Say Gay” bill into law would come at great expense to the state if it were to defend the law in court, not to mention the provision of the bill that allows families to sue if they feel the school their children attends engaged in instruction of LGBTQ issues in contravention of the measure.

Under the legislation, schools for children in kindergarten through grade 3 may not engage in “instruction” about sexual orientation and gender identity, or generally throughout the education system “in a manner that is not age-appropriate or developmentally appropriate for students.” Although the legislation allows for internal review and resolution if a parent brings a complaint against the school for violating the measure, the “Don’t Say Gay” bill also empowers a parent of a student who feels the law was violated to “bring an action against a school district” in court to seek damages.

Proponents of the bill downplay it as a parental rights measure aimed at preventing K-3 students from being taught sex education or teachers engaging in critical general theory writ-large in the Florida school system, but the measure contains no limiting principle restricting its impact to those concepts. In fact, Republican lawmakers at an earlier stage in the legislative process rejected an amendment proposed by a Democrat that would redefine the prohibition under the measure to “sexual activity.”

David Flugman, a lawyer at the New York-based Selendy Gay Elsberg PLLC whose practice includes LGBTQ rights, said restrictions of the measure on speech in schools make the protections under the First Amendment a possible choice for “a serious challenge” to the “Don’t Say Gay” measure.

“I do think that there are First Amendment grounds to challenge this on from the perspective of teachers,” Flugman said. “The state has a pretty strong interest in what’s taught in schools and what ages. Now, usually that goes through the Department of Education or something like that as opposed to the legislature doing it this way. But the fact that you’re basically barring an entire topic of conversations, that on its face seems like it’s content-based speech regulations, which is usually subject to strict scrutiny under First Amendment law.”

Although the question of standing might be an issue if no action has been brought against a particular teacher, Flugman said he could imaging other entities, including a teacher’s union, to represent teachers on their behalf.

But not all experts agree a First Amendment challenge is the way to go for a lawsuit against the “Don’t Say Gay” measure in court given the expected state role in managing the curriculum and standards of its schools.

Dale Carpenter, a conservative law professor at the Southern Methodist University Dedman School of Law who’s written in favor of LGBTQ rights, said the language in the bill on “instruction” is guiding curriculum, which is “ordinarily within the authority of the state” and therefore not grounds for a First Amendment challenge.

“It should not be applied to offhand discussion or conversation or acknowledgement of students’ same-sex parents or something like that,” Carpenter said. “So to the extent that is what the bill is doing, there’s not a really good basis for challenging that part of the bill under the First Amendment.”

Carpenter, however, conceded a First Amendment challenge may be possible under the bill’s provision that more generally prohibits schools from engaging in LGBTQ issues in ways that are “not age-appropriate.”

“That part of the bill might be challenged on vagueness grounds under the First Amendment because the fear would be, since nothing is spelled out about this age appropriate or development appropriate language, your expression might be chilled in the classroom, might deter people from even speaking in a way that would be protected,” Carpenter said. “So that’s a possible challenge. I don’t know that it’s very strong, but it’s a possible challenge.”

Carpenter added another possible First Amendment challenge to the bill may be possible if a particular Florida school were to interpret the language to include not just instruction, but offhand conversation. A disciplined teacher, Carpenter said, could bring a lawsuit against the measure on First Amendment grounds because the law would have been “applied in a way that was overly broad.”

Flugman said he could “definitely see” a clear-cut case based on Title VII against the “Don’t Say Gay” measure from LGBTQ teachers in Florida who feel the need to keep quiet about their sexual orientation or gender identity.

“Title VII is pretty broad in that; it’s not just hiring or firing, but it’s the terms of employment and how someone is treated at work and the benefits and all of that,” Flugman said. “And so, you know, if someone is basically being forced to hide their identity in a school in Florida as a result of this bill, I think that you absolutely could see a claim under Title VII against the school district for that.”

The Biden administration already weighed in on the legality of the bill via the Department of Education by suggesting the “Don’t Say Gay” would contravene Title IX, which bars discrimination on the basis of sex in education, thus could jeopardize the state’s federal funding for its schools.

Secretary of Education Miguel Cardona issued the warning to Florida in a statement after the Florida Legislature gave its final approval to the measure, which he called “hateful” and a distraction from issues such as recovery from the coronavirus pandemic.

“The Department of Education has made clear that all schools receiving federal funding must follow federal civil rights law, including Title IX’s protections against discrimination based on sexual orientation and gender identity,” Cardona said. “We stand with our LGBTQ+ students in Florida and across the country, and urge Florida leaders to make sure all their students are protected and supported.”

Stoll said he has “not spoken with anyone at the government” regarding potential penalties from the Biden administration for Florida under the “Don’t Say Gay” bill, but supports efforts from the standpoint of civil rights laws in the wake of the Bostock ruling.

But the wide-ranging possible impact of the law on LGBTQ students, families, and teachers as well as the potential impact on the Florida education system by empowering parents to sue the school their child attends if they feel it violated the “Don’t Say Gay” bill’s provisions make possibilities for legal challenges to the measure virtually endless.

Carpenter, asked by the Blade about the provision in the bill allowing parents to sue in a way that is different from managing other curriculum standards in Florida, envisioned a legal challenge to the “Don’t Say Gay” bill not unlike a challenge to the anti-abortion law Senate Bill 8 in Texas.

“I think once a parent brings some kind of action, and if the school tries to restrict the teacher’s speaking, then the teacher can launch a challenge to the heart of the bill,” Carpenter said. “The concern is these parents are going to bring some kind of action anytime “gay” is mentioned in the classroom, even though it’s not a curriculum matter. That’s the concern, and if school started enforcing it that way, then the defense could be brought to say, ‘Hey, that’s not something that’s within the curricular determinations of the state.’”

Flugman said he could see a lawsuit against the “Don’t Say Gay” measure based on a right to education similar to a case his team litigated in the Sixth Circuit, although he conceded he doesn’t know the case law is developed within the 11th Circuit, which has jurisdiction over Florida.

“The case in the Sixth Circuit came up in the context of race discrimination in certain Michigan schools in Detroit,” Flugman said. “But could you make an argument like along those lines? It’s a lot more inchoate. There’s not a firmly established right there, a creative plaintiff could frame the claim there as well and try and get some traction.”