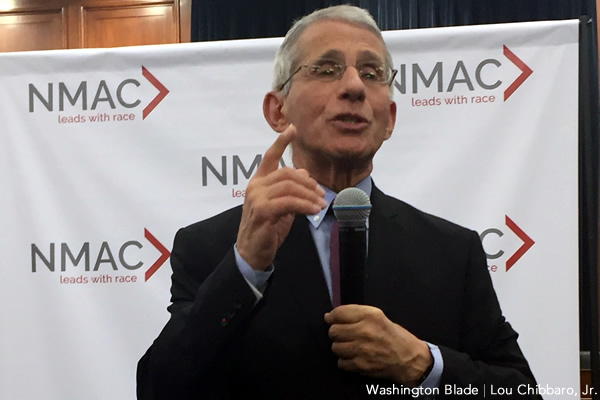 Dr. Anthony Fauci on Friday said it remains unclear whether people with HIV are more vulnerable to the coronavirus.

“The story is not yet completely out in individuals with HIV,” he said during a panel that took place on the final day of the 2020 International AIDS Conference. “Those with HIV that’s not controlled in the sense of controlled viremia as opposed to those with good control. That knowledge store is still evolving.”

Fauci in his presentation also said there is a “significant issue” in the U.S. “with a disproportionate disparity or serious illness among our minority population” with Black people, Latinos and Native Americans most impacted. Dr. Deborah Birx, the coordinator of the White House’s coronavirus task force, echoed Fauci in her own remarks during the panel.

“This is like HIV and that there are specific vulnerable groups, either by race, ethnicity or their relationship in poverty,” she said.

Both Birx and Fauci said hypertension, diabetes and obesity are among the underlying health issues that make people more vulnerable to coronavirus.

Dr. Sarah Henn, chief medical officer at Whitman-Walker Health in D.C., told the Washington Blade in March that older people with underlying medical conditions and those who have chronic illnesses are most vulnerable to the pandemic. Immigration Equality and other advocacy groups have also said U.S. Immigration and Customs Enforcement detainees with HIV are also at risk.

The International AIDS Conference was to have taken place this week in San Francisco and Oakland, Calif., but it happened virtually because of the coronavirus pandemic.

Johns Hopkins University of Medicine’s Coronavirus Resource Center notes there are more than 3.2 million confirmed coronavirus cases in the U.S. Their statistics also indicate the pandemic has killed 134,729 people in this country.

The New York Times reported there were 68,241 new coronavirus cases reported in the U.S. on Friday.

Birx noted four states — Arizona, California, Florida and Texas — account for 50 percent of new coronavirus cases in the country. She also said positive test rates in Houston and Phoenix are higher than 20 percent.

“In the United States we have increased number of cases over the … particularly past three weeks,” said Birx. “We have not seen this result in increased mortality but that is expected as the disease continues to spread in some of our large metro areas where co-morbidities exist.”

“There is transmission by asymptomatic and pre-symptomatic individuals to unaffected individuals, which clearly complicates greatly attempts at contract tracing and isolation,” he said.

The Trump administration’s response to the pandemic has been widely criticized, but Birx stressed the U.S. has “worked hard to expand testing.” Birx also said efforts to combat the virus in this country remain largely focused on the state and local level.

Florida Gov. Ron DeSantis, a Republican who is a close Trump ally, is among the governors who continue to face sharp criticism over their response to the pandemic.

“The United States is a state-by-state, county-by-county and that’s the way we’ve made our response, very much looking at a very granular level and then working with the governors and the mayors to have a very specific and tailored response for each of these areas,” said Birx.

Fauci, like Birx, acknowledged the pandemic is far from under control in the U.S.

“My own country, the United States … is in the middle right now, even as we speak, of a very serious problem,” said Fauci.