“Last night we had a full house, standing room only, and at various times the crowd spilled out into the parking lot,” said Elizabeth Anderson, executive director of Charis Circle, the nonprofit arm of Charis Books & More.

“We had 20 different LGBT writers from different segments of the queer community. It was a beautiful event,” Anderson said. “This event was certainly more visible than others we’ve had. I don’t know if that had anything to do with the timing … but also some other businesses in Little 5 Points were hit [with graffiti].”

The graffiti includes an image of a penis, the words “Creep,” “Eat mor dick” and “Fuck dikes.” 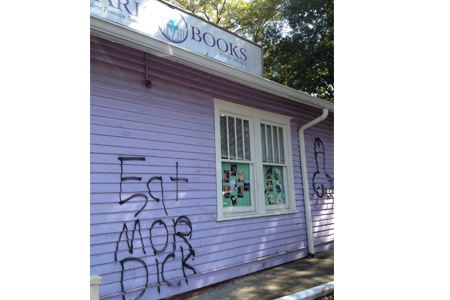 An anonymous person called the Atlanta Police Department at approximately 11:14 p.m. to report seeing men loitering and painting the walls of the “bookstore behind the Brewhouse pub.”

“On the west-facing wall, open to the parking lot, I observed four pieces of graffiti which contained anti-lesbian messages,” the police report states.

Charis’ Thursday literary event finished about 10 p.m. and everyone was out of the store by 10:15 p.m., so the vandalism occurred right after everyone was gone, said co-owner Sara Luce Look.

“We’ve gotten threatening phone calls, mostly about being race traitors during the HB 87 debate [Charis was opposed to the anti-immigration bill passed in the General Assembly and offered its store as a safe space for undocumented people], bible tracts being left in our store,” Anderson said. “But no, we’ve been blessedly free of foolishness throughout our many years.”

The APD report states that Officer Brian Sharpe, the LGBT liaison, was notified. Look said she found the report placed in the door when she came into work this morning and she spoke with Sharpe this morning.

Plans are now today to prime the side of the building marked up with graffiti to prep it for a future community mural. People are asked to make donations to Charis Circle, which pays for the upkeep of the building. Volunteers who want to help can do so by showing up with painting supplies after 3 p.m. today at the store.

“I am from the school that if they are gunning for you then you are doing something right,” Anderson said. “It means politically you are valuable. To me it means we are doing good work.”

Community support is also needed, Anderson said, and people are asked to attend Saturday’s literary event as part of its Pride celebration, “The Tears on Her Face are From Laughter: Queer Stories of Survival.” 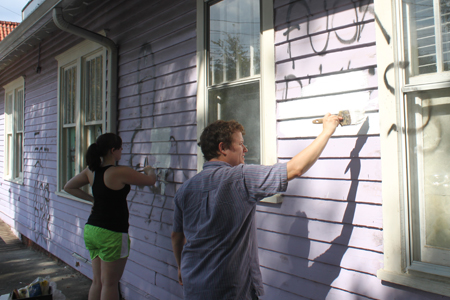 Oliver Howington (right), a six-year employee at Charis, paints over some of the graffiti with primer on Friday, along with volunteer Kendall Prevatt. Howingting was “angry and hurt” to see the vandalism and called the incident “shameful.” Prevatt said she volunteered to help because she supports everything the bookstore does for the community. (Photos by Dyana Bagby)