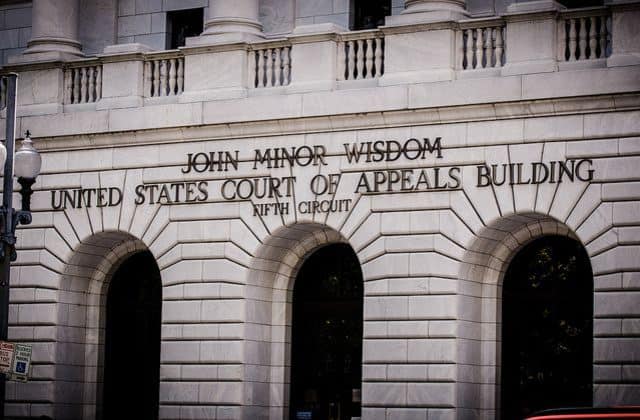 Same-sex marriage bans in Texas, Louisiana and Mississippi appear to be on the way out.

Observers attending Friday’s 5th Circuit Court of Appeals hearing in New Orleans of oral arguments challenging the bans are predicting the vote will be 2-1 to strike them down. The hearing was before a three-member panel.

“After more than three hours of arguments on Friday, the U.S. Fifth Circuit Court of Appeals seemed poised to rule 2-1 against bans on same-sex marriage in Texas, Louisiana and Mississippi,” reports the Washington Blade.

At one point, Higginbotham talked about sexual orientation as an immutable characteristic and having no bearing on a person’s contribution to society. Higginbotham also asked Kyle Duncan, the special counsel representing the state of Louisiana in court, why sterile couples should be allowed to marry if the objective of the state’s ban on same-sex marriage is procreation.

Smith seemed to be the only judge on the panel backing the bans, according to the Blade.

At one point, Smith said striking down a statute under rational-basis review would suggest [Louisiana] acted irrationally by passing the law. Graves said the rational-basis test instead means a state must show a connection between a law and a legitimate rationale.

“I just don’t think finding a law unconstitutional is tantamount to saying the people who passed it are irrational,” Graves said.

“We are very hopeful that wedding bells will be ringing soon for same-sex couples in Louisiana,” she said in a statement. “The lower court got it wrong. It stands almost alone against the avalanche of recent rulings that have concluded these discriminatory marriage bans violate the constitution. We trust the 5th Circuit will see through the desperate arguments the state put forth.”

Evan Wolfson, president of Freedom to Marry, issued a statement:

“Once again an appellate court was presented with the lopsided case in favor of the freedom to marry, the opponents having no evidence and no significant legal justification to outweigh the powerful arguments for ending the exclusion of gay couples from marriage. Couples in Texas, Louisiana, and Mississippi have the same aspirations for love and commitment, the same needs for the legal protections and responsibilities marriage brings, and the same rights under the Constitution as couples in the vast majority of the country where marriage discrimination has been discarded. Freedom to Marry joins these couples and their advocates in calling on the 5th Circuit to do what nearly 60 state and federal courts, including four federal circuit courts, have now done: affirm the freedom to marry and end the discrimination that harms families and helps no one.”

When a ruling will be made by the 5th Circuit is not known.