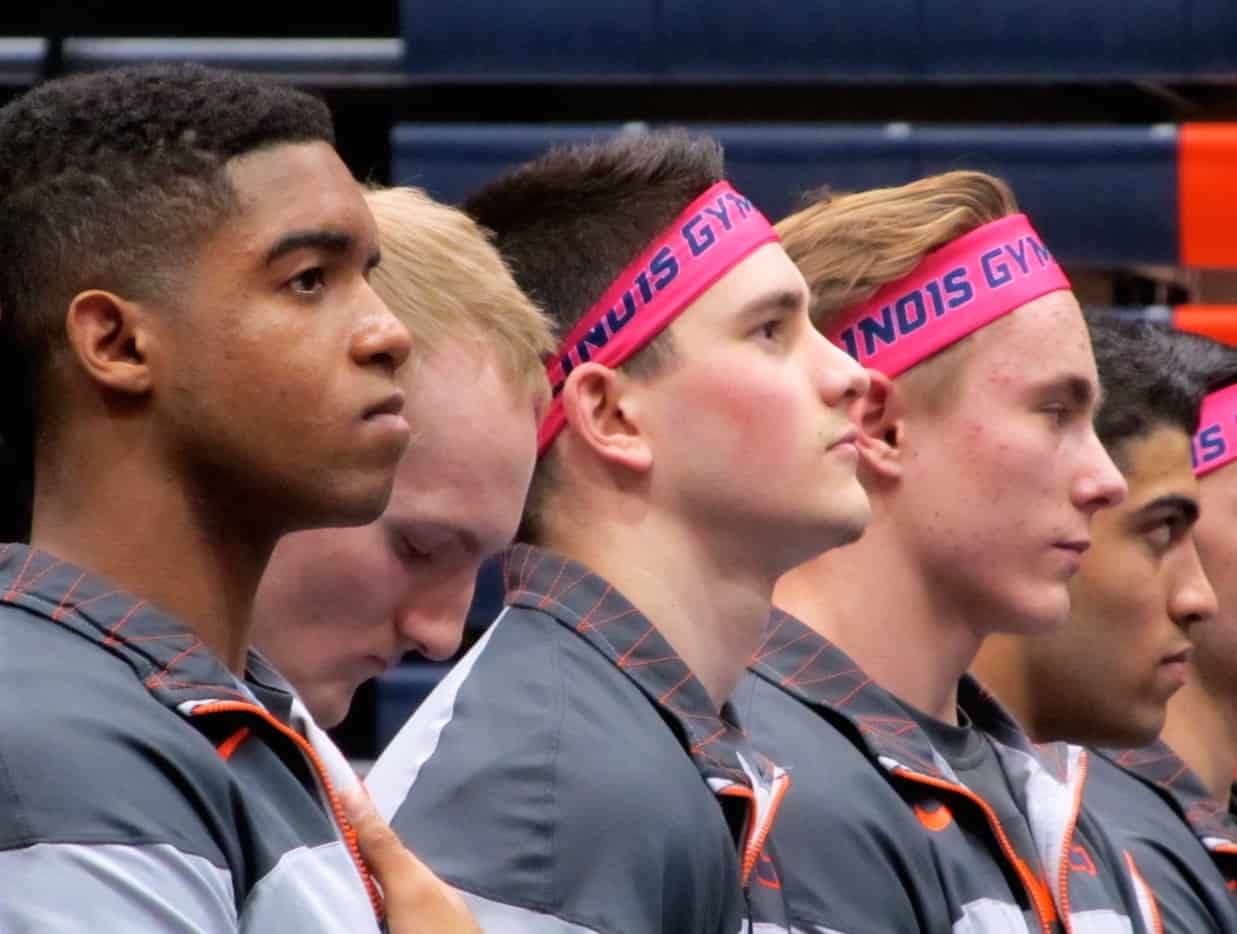 CHAMPAIGN, Illinois —Following a day-long party at an off-campus house, Cameron Rogers sat beside Fred Hartville as their gymnastics teammates found seats and formed a circle.

Hartville, of Atlanta, needed assistance the past three days after right knee surgery. Rogers took him to the hospital for the surgery, and Rogers let Hartville stay with him while he recuperated.

On that Saturday, May 3, 2014, Hartville possessed some mobility with crutches. So when Rogers took a seat beside Hartville, he could help him physically, but more importantly, he could provide moral support, too.

Hartville had news to tell the team.

All 19 members of the University of Illinois men’s gymnastics team formed a circle to conclude the 29th annual team pig roast. There’d been nearly 12 hours of drinking, hog cooking, and revelry when they gathered to reflect on their season.

Each person talked briefly. Hartville, a sophomore, wanted to be direct when his time to talk arrived, so he said, “I’m sad that the seniors are leaving, and I’m gay.”
The circle of men applauded.

“At that moment, I just kind of blacked out just from the excitement,” Hartville says. “It was that moment I felt free.”

For Matt Foster, applauding his teammate wasn’t enough. He stood up, walked over, and hugged Hartville.

“It was an honor to know that he was that comfortable with himself and us that he did it in such a powerful way around 18 strong-willed people,” Foster says. “We had his back, and he understood that.”

It’d been an emotional 13 months for Hartville building to that day in May.

Hartville obtained greatness his freshman season at Illinois winning the 2013 NCAA vault title. Injuries prevented him from finding that success in consecutive years, but during his sophomore year, Hartville found himself. And he couldn’t have done it without Rogers.

“Cameron was that person I looked up to,” Hartville says. “That’s who I first told. That’s who helped me through the process the most.”

FROM WALK ON TO NCAA CHAMPION

Hartville graduated from Arabia Mountain High School in Lithonia, Georgia, in 2012, where he won the state championships in vault and floor his senior year.  He joined the Illinois gymnastics team that fall as a walk-on. This was no small feat— the Fighting Illini are ranked as one of the top men’s gymnastics team in the nation with 10 team NCAA championships and a record 53 individual NCAA titles.

Then, in August, Hartville met Rogers, the first openly gay man Hartville ever got to know.

To end his freshman gymnastics season, Hartville sprinted 11 steps on a blue runway pad at the Penn State Recreation Building during the final day of the NCAA Men’s Gymnastics Championship on Sunday, April 21, 2013.

“Running down the vault runway … I felt as if this is it. I have this,” Hartville recalls.

The 5-foot-4, 132-pound black man then starts his Yurchenko 2 1/2 — a round-off, a back handspring from his feet, a propulsion with his hands off the vault and, “bam!” Hartville stuck the landing.

“I was in so much disbelief,” Hartville says of the landing.

Illinois coach Justin Spring threw both hands in the air and his jaw dropped when Hartville landed the vault.

“It (the vault) really comes down to who’s going to stick it that day,” Spring says. “You look at what Fred did his freshman year, he probably stuck like 80 percent of his vaults in competition. I don’t think that’s ever been done.”

Hartville went on to win the 2013 NCAA vault title.

“That’s when I really started getting into looking that type of stuff up on the internet and going to watch these YouTube videos of other people coming out,” Hartville says.

Nothing on YouTube affected Hartville more than when he happened to watch Steve Grand’s debut single “All-American Boy” about a gay man’s secret unrequited feelings for another man.

FINDING A CONFIDANT
“You would rather go spend Thanksgiving with a gay boy and his family rather than come home,” Barbara Hartville said to her grandson Fred Hartville shortly after he got home for Christmas in 2013.

She didn’t know Fred started thinking he was gay and couldn’t withhold her displeasure that he spent Thanksgiving 2013 with Cameron Rogers’ family.

Fred Hartville, who lived with his grandma during high school, planned to save money and spend Thanksgiving in Champaign, Illinois, instead of flying home to Atlanta. Rogers was driving home to Charlotte, North Carolina, so Rogers’ roommate and Hartville received invitations to come along to the Tar Heel State.

“I think subconsciously, I did it as I started coming to terms with my sexuality,” Hartville says of developing a close friendship with Rogers. “It’s where I felt comfortable, so that’s just where I kind of gravitated towards.”

Near the end of January 2014 after the semester resumed, Rogers invited Hartville to dinner. Rogers cooked dinner then they talked. Hartville looked Rogers in the eyes and, for the first time, told someone that he is gay.

“The first person you tell is sometimes the hardest,” Rogers says. “I’m glad that I made him feel safe enough that he could tell me and talk to me about it.”
It’d be three months until anyone else on the team knew Hartville’s sexuality.

“There was a point where he was probably not in a great place and frustrated with gymnastics and with just everything in general,” Rogers says of Hartville’s 2014 season. “I could tell, and he would talk to me also. He definitely was not in top mental shape the whole year.”

Matching his previous year’s success proved tough, and the burden of the secret about his sexuality added to the strain.

“I was trying to compete at the same level I was as a freshman,” Hartville says. “With that extra stress of not being out and trying to hide that fact, it definitely added on to what I already had.”

Then, there were his knees.

“He was probably physically only like 50 or 60 percent, and that’s tough to be counted on when you’re only half strength because of a pretty awful injury that he kind of had to battle through,” Illinois’ coach Spring says.

Hartville dealt with knee pain his freshman season, but the patella tendonitis in both knees intensified his sophomore season. His best vault score of the season happened the second meet of the year, and he never matched his best score from the freshman year.

“It hurt running. It hurt hitting the springboard and landing,” Hartville says of his knees. “It was just always something I thought about.”

As Hartville’s physical pain increased, the mental strain of hiding his sexuality began decreasing. He started enjoying himself more when he went with Rogers and Wesley Richier, Rogers’ boyfriend, to Champaign’s gay bar. Hartville also experienced his first boyfriend, which lasted a couple weeks.

Hartville’s knees were too much to overcome by the end of the year. He didn’t make top 10 in the Big Ten vault, and he produced Illinois’ lowest score of its five vault competitors at the NCAA meet. But he never wanted to quit. The 2014 NCAA season mercifully ended April 12, and Hartville went for right knee surgery April 30.

Box made sure he felt fine after the surgery then she asked Hartville, “When you going to get a girlfriend?”

“I don’t want a girlfriend.”

With that, his family learned that Fred Hartville was gay. Box put many of his eight siblings on the phone with him that afternoon.

“I cried,” Hartville says. “To hear that she was OK with it and then for my sister to be OK and then it went on to my brother and my step-dad and my other sisters, it was one of those that kind of came over me. I’m OK, and I’m going to be OK. And they accept me, and they still love me for who I am.”

Three days later, Hartville told his teammates that he’s gay. After the positive reception from his family, he could handle telling anyone else.

“To know that your parents still accept and love you knowing that you’re different than a lot of other people, that means a lot,” Hartville says.

Hartville’s now received acceptance from everyone in his life — including his grandma Barbara — and wonders why he waited to tell anyone. He’s also thankful Rogers provided the guidance that helped him only spend months instead of years hiding his sexuality.

“I don’t think I would have done the things that I’ve done — to come out or anything — if it wasn’t for him,” Hartville says. “He gave me that comfortability that I needed and that sense of reasoning that I needed.”

Rogers says he didn’t expect to become such close friends with Hartville, but he’s glad they did.

“He’s one of my best friends,” Rogers says. “I care a lot about him as a person. I care about his well-being. I care about how his gymnastics is going. … He’s a very important person in my life.”

Rogers and coach Spring have both seen Hartville’s belief in himself grow since his freshman year, and both say that no word better describes him than “confident.”

It’s been a transition for Hartville’s friendship with Rogers since Rogers graduated in May. Rogers now works in Washington, D.C., as an analyst for Capital One.

They stay connected with a 60- to 90-minute conversation about twice a month, and on Saturday, Feb. 7, Rogers attended Hartville’s first competition since returning from his knee surgery.

To start his junior year, Hartville placed third out of 10 competitors on the vault.