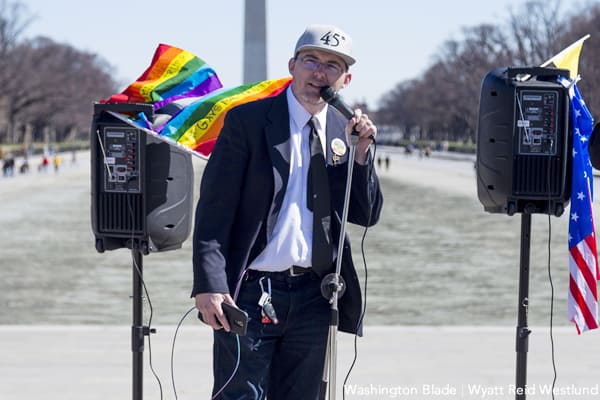 Peter Boykin, founder and president of the North Carolina-based group Gays for Trump, lost his race for a seat in the North Carolina House of Representatives on Tuesday in a district that includes the city of Greensboro.Washington Blade photo by Wyatt Reid Westlund

According to the Greensboro News & Record, incumbent Democrat Amos Quick beat Boykin, who ran as a Republican, by a margin of 21,134 votes to 6,395 votes or about 76 percent to 23 percent.

Quick serves as pastor of Calvary Baptist Church in High Point, N.C. He is completing his first term in office and was challenged by Boykin in his bid for a second term.

Following Trump’s election as president Boykin organized two pro-Trump rallies on the National Mall in D.C., which drew only a few dozen people.

In a message posted on Twitter Tuesday night after the election results became known, Boykin said, “It was a Tough Battle and I said I would represent EVERYONE and I only would hope that my opponent Quick will do the same…God bless Guilford county and Greensboro.”

In a separate Tweet, Boykin added, “This is my Daily Shout out to RealDonaldTrump the Greatest Potus we have had since Reagan. Thank you #Trump for #Making America Great ALWAYS. #MAGA.”