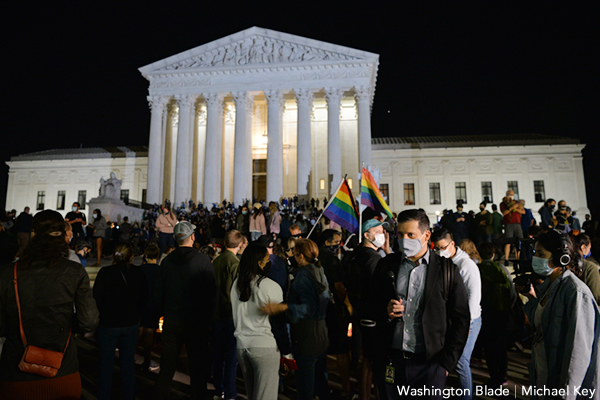 In the aftermath of Ruth Bader Ginsburg’s death, the resulting conservative shift on the U.S. Supreme Court may enhance the prospect of wins for religious freedom at the expense of LGBTQ rights, including in a pending lawsuit that will decide if a Catholic foster care center in Philadelphia can reject same-sex couples.

The remaining eight-member court will lack a reliably progressive voice as it adjudicates where to draw the line on contentious social issues—and that disparity will be compounded if President Trump gets to pick a replacement from his list of potential judicial nominees, many of whom with extensive anti-LGBTQ records.

Nan Hunter, a law professor at Georgetown University who has written on LGBTQ issues, said with Ginsburg gone the “biggest area of jeopardy for LGBT rights at the Supreme Court will be in the area of religious claims from anti-discrimination principles.”

“She was rigorous in assessing the impact of religious liberty claims with regard to protecting employees and others who are protected by civil rights laws,” Hunter said. “You can see that in Masterpiece Cake[shop] for example, or in the Christian law student case where she wrote the opinion, so the issues that I worry about most are the issues involving those sorts of religious grounds.”

The issue of religious freedom versus LGBTQ rights, in fact, is presently before the court in the case of Fulton v. City of Philadelphia. Catholic Social Services, which operates foster care services in Philadelphia, is asserting a First Amendment to reject same-sex couples as parents based on religious objections, even though it signed a contract with the city agreeing to abide by LGBTQ non-discrimination terms.

The Supreme Court is set to hear oral arguments in the case on Nov. 4, which is the day after Election Day. The stakes are incredibly high in the case because a ruling in favor of Catholic Social Services could mean exemptions for religious entities to all non-discrimination laws and policies—whether it be based on LGBTQ status or any other category, such as race, gender or national origin.

Lori Windham, senior counsel at Becket Law who’s set to argue on behalf of Catholic Social Services before the Supreme Court, previewed her argument on behalf of plaintiffs Sharonell and Toni Fulton in a conference call with reporters Tuesday, although she explicitly didn’t address how Ginsburg’s factors into her litigation plan.

“Our litigation strategy is what it always been,” Windham said. “Philadelphia has violated the Constitution, and done it in a way that is particularly harmful for foster moms like Sharonell and Toni, and for foster children. The city of Philadelphia admitted there were 250 children who were in institutions in Philadelphia and needed to be placed in loving homes, and yet it refuses to move any of those children into homes that are empty like Sharonell’s, just because thaws families work with Catholic Social Services of Philadelphia.”

Hunter said Ginsburg—who joined each of the landmark Supreme Court decisions for LGBTQ rights and is remembered as a steadfast LGBTQ ally—would have taken a skeptical view of the religious freedom claims raised by Catholic Social Services.

“I just don’t think Justice Ginsburg would stand for that,” Hunter said. “I think she would say that in a completely privately funded space, there are ways in which religious groups can live out what they believe their faiths commands them to do, but … the city has a right to use public funds and to contract with agencies that will abide by the city’s own anti-discrimination laws.”

One possibility is without Ginsburg, neither side in the case would be able to reach a majority and the court would issue a split 4-4 decision.

Jon Davidson, legal counsel for the LGBTQ group Freedom for All Americans, said “Ginsburg’s death is a serious blow to the LGBTQ community, among others” and a tied decision would leave the issue open to further litigation.

“If a new justice is not sworn in by Nov. 4, when the Fulton case is set for argument, and the court rules 4-4, that ruling would affirm the result of the 3rd Circuit, which rejected claims that a religious agency has a constitutional right to an exemption from a city nondiscrimination requirement in contracts under which the city pays groups to provide government foster care services,” Davidson said. “A tied decision, however, would not create any precedent binding on lower courts.”

Even with an 8-member court, there are signs a majority of the court could rule against LGBTQ families. Already three members on the court—Associate Justices Neil Gorsuch, Samuel Alito and Clarence Thomas—have signaled they would have granted relief to Catholic Social Services in a dissent to an earlier order the court had issued. That was before any briefing took place in the case at any level.

Moreover, Senate Republicans are chomping at the bit to replace Ginsburg with a Trump appointee before the presidential election in less than two months. They may succeed in confirming a justice such as Amy Coney Barrett, a judge on the U.S. Seventh Circuit Court of Appeals who’s Catholic and indicated her judicial philosophy is with infused with her religious views.

Davidson, however, said all is not lost if Senate Republicans get their way with a new confirmation, pointing to conservative justices who joined with liberal justices in LGBTQ rulings.

“The Fulton case is incredibly important. Its outcome could have broad implications for the application of nondiscrimination laws and government policies around the country,” Davidson said. “But even though freedom of religion matters to all of us as Americans, it shouldn’t be used to create a license to discriminate. The justices should oppose sweeping, extraordinary exemptions that could create a broad license to discriminate based on a taxpayer-funded agency’s religious beliefs, and we are hopeful that any new justice would recognize that as well.”

It wasn’t immediately clear at what point it would be too late for a newly confirmed Supreme Court justice to weigh in on the Fulton case. The Supreme Court public affairs office didn’t respond to repeated requests to comment on what the rules say for when a Senate confirmation would be too late for a justice to intercede on any particular case pending before the court.

Could past LGBTQ wins be in peril?

Meanwhile, fears persist with Ginsburg gone that LGBTQ victories previously won at the Supreme Court will be in jeopardy. The range of these victories include the decriminalization of same-sex relations in the U.S., same-sex marriage nationwide and, most recently, a guarantee that LGBTQ people are protected under civil rights laws.

Hunter, however, downplayed the idea these wins could be in peril, making the case they’re “thoroughly accepted in the law and in society more broadly.”

“For example, take Obergefell, you can’t unmarry people,” Hunter said. “I think the degree of acceptance of that issue is now so widespread throughout the country that I don’t think there would be any significant effort to try and reverse it. I just don’t think that would go there.”

Hunter made a similar assessment with the Supreme Court’s Lawrence v. Texas ruling in 2003, which struck down state laws criminalizing same-sex relations, and the Bostock v. Clayton County decision this year, which found anti-LGBTQ discrimination is a form of sex discrimination, thus illegal under Title VII of the Civil Rights Act of 1964.

“The power of Bostock was that it shifted the burden of inertia and Congress is so dysfunctional at this point that unless there’s a really transformational shift in the control of Congress, it’s unlikely to amend Title VII in either direction frankly — either to secure the decision in Bostock or to undo it,” Hunter said.

But while some past victories seem safe even with Ginsburg no longer on the court, chipping away at marriage equality remains a possibility.

Although the Supreme Court had ruled in favor of marriage equality nationwide in 2015, Arkansas had sought to relitigate the issue in 2017 the case of Pavan v. Smith by refusing to grant birth certificates to children reflecting same-sex parents where one parent is a birth mother, the other a same-sex partner. The Supreme Court affirmed Obergefell applies in the cases, but Gorsuch led a stinging dissent suggesting marriage equality has limits, including in the area of birth certificates.

Hunter conceded that marriage equality remains an issue around the edges, such as employers who don’t wish to recognize same-sex marriage in terms of spousal benefits.

“I think the issue in terms of marriage, there the concern would be whether such an extremely conservative majority could dominate the Supreme Court that although the right to marry would remain in place, there might be exceptions in terms of solely equal treatment of same-sex marriage at least by some employers or some institutions,” Hunter said. “And the most likely category would be religious institutions or religiously affiliated institutions, or even as we saw in Hobby Lobby businesses that are privately owned and owners claim to be acting on their religious beliefs in the way they run a business.”

Given the persistence in some of places of the U.S. were politicizing same-sex marriage would be still be politically popular, state actors might still be responsible. All it would take is one state to undermine marriage equality.

In fact, the question is before the Supreme Court in the form of a petition of review filed by the state of Indiana, which justices will consider ahead of the long conference at the start of its term next week. Indiana Attorney General Tom Fisher is asking the high court to review a U.S. Seventh Circuit Court of Appeals ruling that sided with a gay married couple who challenged the state’s birth records law.

Another issue that may soon come before the court is whether or not transgender people are guaranteed access to public restrooms consistent with their gender identity. The U.S. Fourth Circuit Court of Appeals refused this week to reconsider a decision determined Title IX of the Education Amendments of 1972 grants trans student Gavin Grimm access to shared facilities as a male. The next step in the case, if the Virginia school district continues litigation, would be a petition for review before the Supreme Court.

Davidson, however, cautioned he doesn’t expect the Supreme Court act on any of petition related to LGBTQ issues before it decides the Fulton case.

“While there are several cases touching on LGBTQ rights in which petitions for Supreme Court review are pending, I would be surprised if the Court granted review in any of those cases when it considers pending petitions on Sept. 29,” Davidson said. “I think it is more likely that the court will wait to decide Fulton before it takes on any additional LGBTQ cases.”