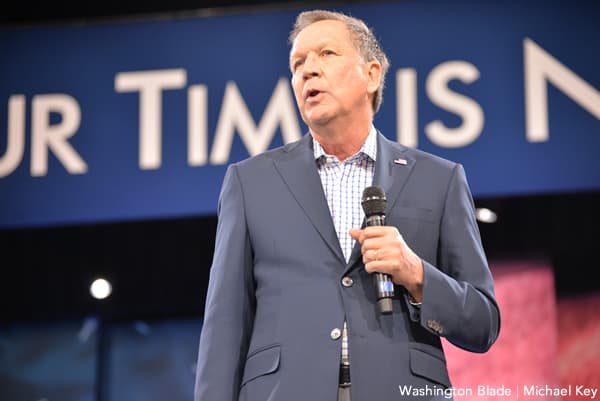 With less than a month remaining in office, Ohio Gov. John Kasich — a prominent critic of President Trump within his own party — signed on Wednesday an executive order barring anti-trans discrimination in the state workforce, instituting the first transgender statewide protections in Ohio.

The new order grants multiple avenues of recourse to transgender state workers in Ohio who believe they’ve been subjected to discrimination in the workforce, such as their supervisors, the Ohio Civil Rights Commission and the U.S. Equal Employment Opportunity Commission. The penalty for engaging in discrimination, as spelled out in the order, could be termination from employment “as well as other sanctions that would be applied to illegal discriminatory conduct under Ohio law.”

Alana Jochum, executive director of Equality Ohio, said in a statement Kasich signs the order after a massive campaign in which the governor heard stories of LGBT Ohio residents who faced discrimination.

“Equality Ohio has been sending the governor letters with stories from LGBTQ Ohioans about their experiences with discrimination throughout the year and finding opportunities to grow his familiarity with transgender people and their lives,” Jochum said. “He heard this call, and we are grateful for Gov. Kasich’s leadership in extending non-discrimination protections for transgender state employees.”

James Knapp, Executive Director of TransOhio, said the executive order marks “truly an important and historic day — not just for the transgender community — but for the entire state.”

“Today, our governor stood up and said that workplace discrimination will not be tolerated in Ohio,” Knapp said. “We are proud to have been a part of this work, and we’re thrilled that state employees will be able to enter 2019 as their authentic selves without fear of unlawful termination.”

At least one LGBT group has said Kasich is the first Republican governor to sign an executive order against anti-LGBT discrimination in a state where statutory protections exist. Embattled over signing the anti-trans bathroom measure House Bill 2 into law, former North Carolina Gov. Pat McCrory, a Republican, also signed an executive order against anti-LGBT discrimination in the state workforce, although the order continued to bar transgender people from using the bathroom consistent with their gender identity in state facilities.

Masen Davis, CEO of Freedom for All Americans, said in a statement Kaisch “heard his constituents loud and clear and today took action to protect LGBTQ people from discrimination in the workplace.

“Our nation is at its strongest when we’re all free to work hard, earn a decent living and go about our lives without fear of discrimination,” Davis said. “This executive order paves the way towards comprehensive non-discrimination protections for all LGBTQ Ohioans and is the most recent indication of growing bipartisan support for protecting all LGBTQ Americans from discrimination in their workplaces, their homes and their communities.”

The order Kasich signed stands in contrast with the Trump administration efforts to exclude LGBT people from the definition of “sex” in federal non-discrimination protections. However, the directive doesn’t go as far as Trump’s pledge to keep in place President Obama’s 2014 executive order explicitly against anti-LGBT discrimination. That order not only barred within the federal workforce, but also workplace discrimination among federal contractors.

Kasich signs the executive order amid speculation he’d amount an Republican insurrection campaign and primary Trump for the presidential nomination in 2020. However, on the same day he signed the executive order, Kasich threw cold water on the idea, saying, “I think right now, today, inside the Republican Party, I can’t beat [Trump] in a primary,” according to the Cleveland Plain-Dealer.

Jon Keeling, a Kasich spokesperson, said in response to a Washington Blade inquiry on why the governor signed the executive order at this time, “The governor continues to be opposed to discrimination in state employment and this order reflects how he believes that policy should be implemented.”

Shawn Copeland, Ohio State Director of the Human Rights Campaign, said in a statement the order “is a critical step in the fight for equality and justice in Ohio.”

“We welcome today’s news and thank Equality Ohio and TransOhio for their ongoing work to safeguard protections for the LGBTQ community in cities and counties across the Buckeye State,” Copeland said.

Kasich will leave office next month after his term expires and be replaced by Governor-elect Mike DeWine. Although DeWine, a Republican, has not weighed in on this specific executive order, he has expressed an openness to preserving Kasich’s executive orders, according to Freedom for All Americans.