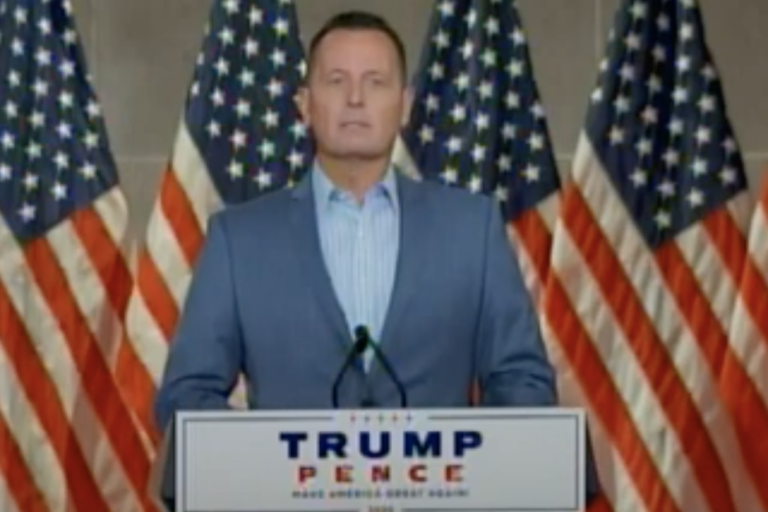 Grenell Makes No Mention of Being Gay in Republican Convention Speech

Richard Grenell, the former acting director of national intelligence hailed by gay conservatives for being the first openly gay Cabinet member, made no mention of his sexual orientation or LGBTQ issues in his speech Thursday at the Republican National Convention.

Instead, Grenell promoted President Trump’s foreign policy of “America First,” which has been criticized for promoting nationalist interests at the expense of America’s global standing.

“America First does not advance the interests of one group of Americans at the expense of another,” Grenell said. “It has no bias about red and blue, educated or not educated, urban or rural. America First is simply the belief that politicians should focus on the equality and dignity of every American, and that the is duty is fulfilled by promoting the safety and wealth of the American people.”

Among the controversial moves Trump has taken in the name of America First was the withdrawal of 12,000 U.S. troops from Germany, which critics say would embolden Russia, and withdrawing U.S. troops from Syria, leaving Kurdish allies with no protection.

Grenell, who also served as U.S. ambassador to Germany, praised Trump for his negotiations in foreign affairs, saying he watched him “charm the chancellor of Germany while insisting that Germany pay its NATO obligations.” (Germany did agree to meet its obligation to spend 2 percent of its GDP on defense, but Trump’s relationship with Angela Merkel is notoriously frosty.)

“The Washington elites want you to think this kind of foreign policy is immoral, and so they call it nationalist,” Grenell said. “That tells you all you need to know. The D.C. crowd thinks when they call Donald Trump nationalist, they’re insulting him, as if the American president isn’t supposed to base foreign policy on America’s national interest.”

Grenell also criticized Joe Biden for his decision as vice president to unmask Trump transition official Michael Flynn when he was under FBI surveillance as part of the Russia investigation, saying it made him sick to his stomach and the Obama administration “secretly launched a surveillance operation on the Trump campaign.”

Although Biden had legal authority to unmask Flynn, new information on those developments is still unfolding and a former FBI official has pled guilty to tampering with evidence that led to the investigation.

Grenell’s appearance at the Republican National Convention comes after he appeared in a controversial but widely viewed video produced by Log Cabin Republicans praising Trump as the “most pro-gay president” ever, which distorted both Biden and Trump’s record to make Biden seem anti-LGBTQ and Trump seem pro-LGBTQ.

The omission of LGBTQ issues during the speech stands in contrast to the video, as well as the Republican National Committee’s recent promotion of Grenell as senior adviser for LGBTQ outreach and the Trump campaign naming him advisory board member for Trump Pride.

Grenell not only didn’t bring up being gay, but also made no mention of the global initiative to decriminalize homosexuality he spearheaded as a Trump administration official. Although the project was the focus of Grenell’s media interviews at home and abroad, it saw no concrete results in terms of changing laws.

Nonetheless, Grenell now has the distinction of being the third openly gay person to speak at a Republican National Convention, following former Rep. Jim Kolbe in 2000 and entrepreneur Peter Thiel in 2016.

By not mentioning being gay from the stage, Grenell is consistent with Kolbe, who also didn’t mention his sexual orientation and focused on trade issues. But the decision contrasts with Thiel, who explicitly brought up being a gay American from the stage.

“‘Gaslight Grenell’ doesn’t speak for LGBTQ people or our movement,” David said. “As a gay man, ‘Gaslight Grenell’ couldn’t even say ‘gay’ or ‘LGBTQ,’ which is unsurprising, given that this administration has taken every opportunity to dehumanize LGBTQ people and undermine our basic rights. It’s also unsurprising given we have exposed Trump’s lies and Grenell’s hypocrisy in supporting him.”