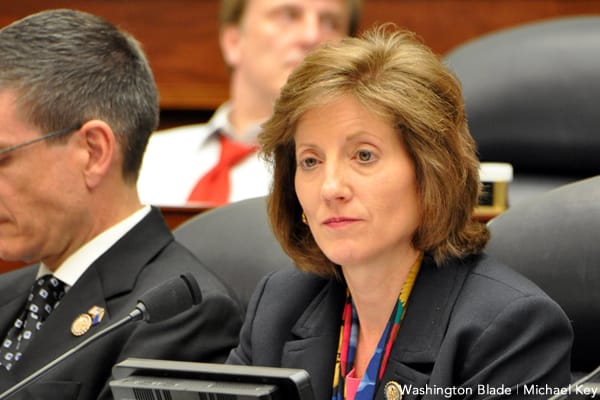 The U.S. House narrowly rejected on Thursday an amendment that would have barred transgender service members from being eligible for transition-related health care, including gender reassignment surgery.

The measure, which would have barred the Defense Department from expending funds on transition-related care, was introduced by Rep. Vicky Hartzler (R-Mo.) as part of the fiscal year 2018 defense authorization bill, but rejected on a 214-209 vote.

After Rep. Doug Collins (R-Ga.), who presided over the vote, called out the tally, Democrats in the House chamber applauded in victory. Rep. Sean Patrick Maloney (D-N.Y.), who’s gay and a co-chair of the LGBT Equality Caucus, could be seen raising both hands in the air in a double-fist bump in celebration.

All 190 Democrats present voted against the proposal. They were joined by 24 Republicans, including Rep. Ileana Ros-Lehtinen (R-Fla.), who has a transgender son, as well as Rep. Charlie Dent (R-Pa.), Rep. Barbara Comstock (R-Va.), Rep. Justin Amash (R-Mich.) and Mike Coffman (R-Colo.).

The vote on the amendment takes place after a short, but intense, period of debate on the House floor in which Hartzler and her GOP allies defended the measure and Democratic opponents criticized it as discriminatory.

Hartzler maintained the amendment was intended to focus the attention of the U.S. military on defeating the nation’s adversaries instead of elsewhere.

Hartzler insisted the amendment does “not preclude service by transgenders” and permits them to have health care other those related to gender transition, even though transgender service members across the board will likely need access to some form of transition-related care to remain in the armed forces.

Rep. Duncan Hunter (R-Calif.), a Marine veteran who served in the Iraq war, likely offered the most visceral defense of the Hartzler amendment on the House floor.

“You’re joining the U.S. military,” Hunter said. “Choose what gender you are before you serve.”

Notably, Hartler was often left to herself when defending her amendment, while Democrats brought several members to the floor who were more prominent, including House Minority Leader Nancy Pelosi (D-Calif.) and House Democratic Whip Steny Hoyer (D-Md.).

Pelosi said the amendment was a thinly-veiled attempt to ban transgender service members from the armed forces by seeking to deny them medically necessary care.

“Make no mistake, the effect and the intent of this unjust and mean-spirited amendment is to ban patriotic Americans from serving our country,” Pelosi said. “It is designed to drum transgender servicemembers out of the military. Instead of protecting the men and women who risk their lives to defend our freedoms, they are fighting to rip away the health care of thousands of brave service members.”

Prior to the vote, the anti-LGBT Heritage Foundation sent out an email blast urging lawmakers to vote in favor of Hartlzer amendment on the basis it supports the military.

Thomas Spoehr, director for the Center for National Defense at The Heritage Foundation, said in a statement the measure is necessary to keep the military focused on its job and to limit costs.

“At a time when growing foreign threats are stretching our military’s resources, our priority should be on maintaining military readiness and directing taxpayer funds towards mission critical purposes,” Spoehr said. “Respecting the dignity of all people does not mean subjecting taxpayers to the high and recurring medical costs of sex reassignment which carries uncertain impacts on military readiness.”

The amendment marked the first-time ever the U.S. House held a vote specifically targeting the transgender community.
Chad Griffin, president of the Human Rights Campaign, commended lawmakers on both sides of the aisle in a statement for rejecting the amendment.

“Today’s strong, bipartisan vote sent a resounding message of support for our military families and transgender service members,” Griffin said. “This dangerous amendment would have put at risk the health and wellbeing of military families, and threatened military readiness and national security. We applaud those members from both parties who stood up for the thousands of transgender service members proudly serving their country.”