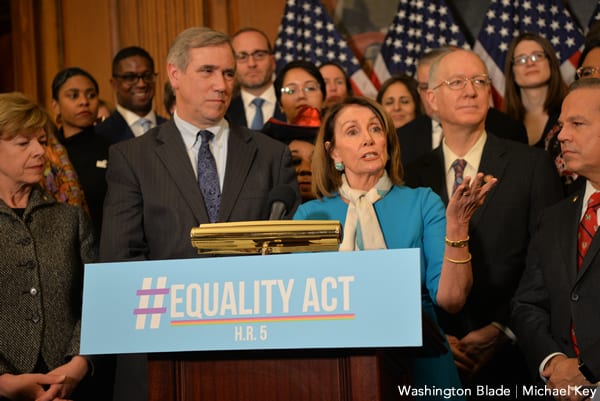 The U.S. House is expected to hold a floor vote next week on the Equality Act, legislation that seeks to ban anti-LGBT discrimination, a senior Democratic aide told the Washington Blade on Monday.

The official announcement on the vote, the aide said, was set for Friday, which is the normal day for when the next week’s schedule is announced in the House.

The floor vote is expected shortly after the House Judiciary Committee reported out the legislation without any Republican support. Additionally, no GOP amendments were adopted to the legislation.

With 240 co-sponsors, including three Republicans, the bill should easily surpass the 218-vote threshold in the House necessary to approve legislation. (The next step, passing the bill in the Senate where the Republican majority controls 53 seats is another matter, as is President Trump signing the legislation into law.)

However, Republicans in the House have an opportunity to thwart the bill with a motion to recommit, a legislative maneuver that forces a vote on an amendment the majority would otherwise not allow to come up. It remains to be seen what the nature of the motion to recommit will be for the Equality Act.

For example, during the vote on gun background checks, Republicans claimed victory on a motion to recommit requiring the notification of U.S. Immigration & Customs Enforcement when an undocumented immigrant fails a background check when attempting to buy a firearm. A similar motion to recommit on the Equality Act could complicate the effort to prohibit anti-LGBT discrimination.

The House is advancing the Equality Act shortly after the U.S. Supreme Court announced it would take up legislation seeking clarifying on whether the existing on prohibition on sex discrimination under Title VII of the Civil Rights Act of 1964 applies to cases of anti-LGBT discrimination. A decision in those cases isn’t expected until June 2020.