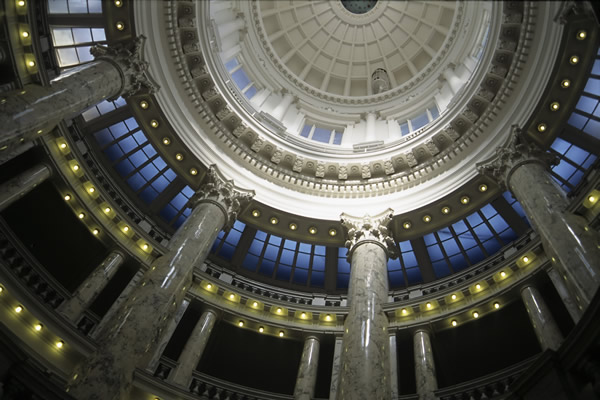 As the nation’s focus has become fixated on the coronavirus, Idaho Gov. Brad Little has signed into law Monday on the eve of the Transgender Day of Visibility two pieces of anti-trans legislation.

Alphonso David, president of the Human Rights Campaign, said in a statement the signing of the legislation is “unacceptable, and a gross misuse of taxpayer funds and trust.”

“Idaho is leading the way in anti-transgender discrimination, and at a time when life is hard enough for everyone, Idaho’s elected leaders will be remembered for working to make their transgender residents’ lives even harder,” David said. “Shame on Gov. Little and the legislators who championed these heinous pieces of legislation.”

Transgender advocates sounded the alarm bells as the advanced through the Idaho stage legislature, but the smoke signals yielded little attention in the media, which has been consumed with the coronavirus.

HB 500, dubbed the “Fairness in Women’s Sports Act,” requires college and public schools sports teams to be designed as male, female and co-ed — and any female athletic team “shall not be open to students of the male sex.”

In the event of a dispute, a student may be required to produce a physician’s statement to affirm her biological sex based on reproductive anatomy, normal endogenously produced levels of testosterone and an analysis of the student’s genetic makeup. That would effectively ban transgender athletes from participating in sports.

Although similar bills are percolating in state legislatures throughout the country, Little is the first governor to sign such a bill. Idaho is now the first state with such a law on the books.

Sam Brinton, head of advocacy and government affairs for the Trevor Project, said in a statement Little has “pushed the transgender community of Idaho to the sidelines, further marginalizing a group that is already at high risk for harassment, discrimination and suicide.”

“It is a sad day in the United States when lawmakers are more determined to stop trans young people from playing games than to provide them with the care, support, and opportunities they need to survive and thrive,” Brinton said.

Little, a Republican, signed HB 500 into law despite an opinion from the Idaho attorney general opinion advising him against it.

Idaho Attorney General Lawrence Wasden, also a Republican, warned the legislation is “constitutionally problematic” and likely violates the Equal Protection Clause of the Fourteenth Amendment to the U.S. Constitution. That a viewpoint was endorsed by five former Idaho attorneys general in a joint op-ed for the Idaho Statesman.

Lindsay Hecox, a transgender woman and a runner attending Boise State University, also condemned the new law in a statement.

“Supporters of this bill are attempting to fix a problem that was never there,” Hecox said. “It specifically targets people like me and all transgender female athletes and denies us the opportunity to compete in sports. It’s unfair, unnecessary and discriminatory, and it ignores the commitment we’ve made to rigorous training and the importance of athletic competition to our lives.”

The other bill, HB 509, is called the “Idaho Vital Statistics Act” and prohibits any changing of the gender marker on a birth certificate from sex assigned at birth except “on the basis of fraud, duress, or material mistake of fact.” That would make it impossible for transgender people to change the document to reflect their gender identity.

HB 509 appears to defy a court order in 2018 requiring Idaho to allow transgender individuals to change the gender marker on the birth certificates.

Peter Renn, counsel for Lambda Legal, was a member of the legal team that secured the court order and said in a statement HB509 flies in the face of that directive.

“At each step of the legislative process, from this bill’s introduction in the Idaho House, through the Idaho Senate, and on to the governor’s desk, policymakers were fully aware that they were explicitly flouting a binding federal court order,” Renn said. “And the court could not have been clearer: This policy was unconstitutional two years ago, and it is still unconstitutional today. Idaho has deliberately set itself on a collision course with the federal courts. It is in open rebellion against the rule of law.”

Because the birth certificate bill disregards a court order, litigation is expected to soon follow against HB 509.

“We stand ready to bring or support litigation challenging them, and we are coordinating with the other LGBT legal groups to ensure that we bring the full force of our movement to bear in this critical moment,” Minter said.

The Washington Blade has placed request in with Little’s seeking comment on why he signed the legislation into law.