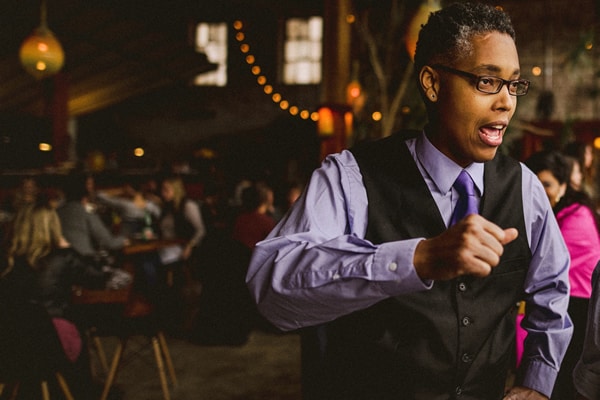 Sean Saifa Wall spent more than two decades in the wrong body until he decided to live the life he had always wanted to: that of a man.

Wall, a nationally recognized black, intersex activist, was assigned female at birth because of his “abnormally” small phallus but had undescended testis. He was one of eight in his family born with partial androgen insensitivity syndrome (AIS): an intersex variation where an individual is born with XY chromosomes but is resistant to male hormones (androgens). Thus, these individuals have the genetic makeup of a male but some or all of the physical traits of a female.

The term “intersex” more broadly identifies any individual who is born with any of several variations in sex characteristics (including chromosomes, gonads, sex hormones or genitals) that do not fit medically rigid definitions of “male” or “female.” Intersex variations are not uncommon and occur in about 1.7 percent of the population — approximately the same percentage as those born with red hair. Around one in 1,500-2,000 children have visible differences at birth, putting them at risk for early cosmetic surgical intervention.

Intersex children like Wall, who are born with genitalia that a doctor considers outside of typical male/female appearance, frequently receive medically unnecessary surgeries to “normalize” their genitals, such as surgeries that reduce an “abnormally” sized clitoris.

Thus, the intersex community continues to oppose these surgeries, arguing they violate a child’s basic and inherent right to bodily autonomy; activists advocate instead for the deferral of any such surgeries until a child can make a consenting decision on their own.

Although Wall did not receive surgery as an infant, he did receive an operation in his adolescence without his or his mother’s informed consent. When he was in college, he got hold of his medical records and finally learned the truth about his past and identity.

When Wall was 13, doctors removed his healthy undescended testis at New York Presbyterian Hospital. For Wall, the consequences were devastating, both physically and mentally.

“My healthy testis were removed at age 13 without my thorough informed consent,” Wall says. “I really struggled at that point, (thinking) I’m a freak. … What the hell do I do with my body?”

Although Wall’s mother consented to the operation, she did so on the premise of false information, a common thread seen across many stories from parents of intersex children. In Wall’s case, doctors lied and told his mother that his testis were cancerous in the hopes of encouraging her to consent to surgery.

“My mom heard cancer, and she was like, ‘No way José. My child is not going to die of cancer,’” Wall says.

Beyond the removal of Wall’s testis, doctors also wanted to perform genital surgery to create a vagina, but his mother said no. This was not the first time she had advocated on behalf of her son’s bodily autonomy. Wall says his mother received countless phone calls from doctors after bringing him home from the hospital when he was born, encouraging her to consent to genital reconstructive surgeries to “normalize” his body.

Wall remains deeply thankful for his mother’s advocacy and is “very glad” no such cosmetic surgeries occurred, but many other intersex children are unable to escape early genital reconstruction. Jonathan Leggette, an intersex activist based in Washington state, is one such individual.

In a testimony to support a California resolution aimed at celebrating intersex folks, Leggette writes: “At 6, doctors operated on me without explaining anything to me, just leaving me to wake up, bandages around my genital areas and a pain I will never forget. I had never had the chance to be told the truth, to be given the chance to decide for myself how my body feels to me. My body was owned by the surgeons before I had a chance to lay claim to it.”

Leggette emphasizes the importance of doctors having honest and transparent conversations with parents, especially given the continued presence of systemic coercion and misinformation in these exchanges. He argues that doctors need to “change the language” they currently rely on when talking to parents about their child’s intersex variation.

Dr. Ellen Feder, professor of philosophy and religion at American University in Washington and author of the book “Making Sense of Intersex,” echoes the importance of these conversations and further explains the challenging position doctors continue to put parents in.

“The way that parents are presented the options are, ‘Here’s what’s going on with your kid, here’s what we know about the condition, here’s all the things we can do, here’s the support we can offer you, or we can do nothing,’” Feder says. “That’s not a choice for most parents. Most parents would see doing nothing as copping out or not helping their kid.”

In this way, “doing nothing” is not presented as a true alternative to surgery, but rather a negligent and irresponsible choice. However, such operations often have lifelong physical and mental unforeseen consequences.

A 2016 study conducted in Australia found that 83 percent of intersex individuals surveyed reported at least one negative consequence (physical or mental) from a “corrective” surgery, and 63 percent reported only negative consequences. The study also found that intersex individuals were disproportionately impacted by mental illness, with 18 percent of respondents reporting a suicide attempt in their lifetime. Regarding physical complications, “corrective” operations can cause infertility, loss of sexual sensation and painful scarring. Still other intersex individuals like Wall are forced to take artificial hormonal replacement for the rest of their lives because their naturally occurring hormones were disrupted.

These surgeries also serve as an indication to intersex folks that their bodies in their natural form are somehow wrong — that, in Wall’s words, “there is something that needs correcting.” This harmful sentiment is frequently internalized by intersex folks, who in turn learn to dislike and be ashamed of their bodies.

Many respected organizations such as the United Nations, World Health Organization and Amnesty International have come out against these “corrective” surgeries, encouraging the deferral of any such operations till the individual is of consenting age.

So, why then do these surgeries continue, despite public denunciation?

Through both his activism alongside other intersex folks and personal experience meeting the doctor who operated on him when he was barely a teenager, Wall has some ideas.

In 2015, Wall confronted the doctor who removed his testis over two decades prior, Dr. Terry Hensle, as part of an ABC News Nightline special. Dr. Hensle told Saifa he had “no regrets” about the operations he had previously performed because he “did the best (he) could do based on what (he) knew.” Wall says, “I knew he wasn’t going to give me what I was looking for” going into the interview, but he wanted the chance to share his personal experience and opinion nonetheless.

“I told him, ‘Can you imagine what you said to a 13-year-old girl that you would create a cavity inside of her, shave down her clitoris — can you imagine how barbaric that sounded?’” Wall says. “And he had no response. … He was too proud to admit that (my surgery) was fucked up. He was so narcissistic … it was really powerful that the video captured (him) live in all his asshole-ness.”

A 2017 Human Rights Watch Report on the intersex community found that most of the bias that exists toward intersex children lies with the surgeons and medical providers rather than parents, although not the entire medical establishment is to blame. Rather, according to Hans Lindahl, an intersex activist based in California, only a small subset of urologists and medical groups continue to promote such operations because they benefit both “monetarily” and “from being the authority and maintaining the status quo.”

Lindahl works to dispel the misconception that the intersex community and the medical community are inherently at odds with one another.

“We’re not anti-medicine, we’re pro-consent,” Lindahl says, reiterating her support for all medically necessary interventions such as urethra constructions and interventions when the child is of consenting age.

Echoing Lindahl’s point, Wall frames these surgeries as entirely cosmetic rather than medical.

Activists argue intersex folks need to be the subjects rather than the objects of conversations moving forward; they need to be recognized as individuals worth celebrating, listening to and learning from.

“Intersex folks … really teach us how complex and how beautiful our bodies are and how nature is so amazing,” Wall says.

Moving forward, when an intersex infant is born, in the words of Feder, “We need to do the brave thing and do nothing.”