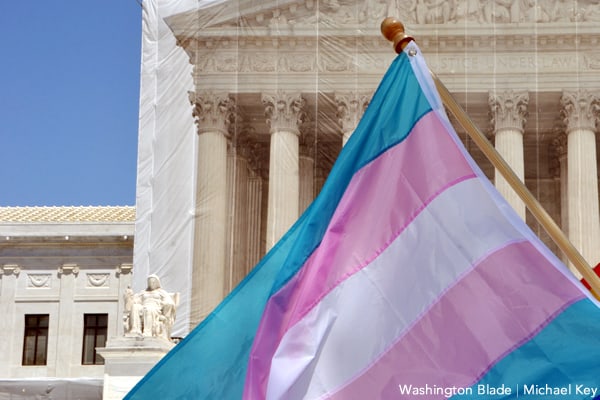 The groups submitted the briefs in response to two separate filings from the U.S. Justice Department under the Trump administration, one calling on the Supreme Court to take up the cases on a interlocutory basis, another calling for a stay on lower court orders against the ban.

The filings on Christmas Eve urged the Supreme Court not to grant the Trump administration’s request at this time for review — an action typically reserved for when the litigation process is finished up through the appellate courts, not now as the cases currently stand before those courts hand down decisions.

One brief filed by the National Center for Lesbian Rights and GLBTQ Advocates & Defenders, which are responsible for two cases against the Trump policy, declares the litigation raises important constitutional issues, but “now is not the appropriate time for this court to consider them.”

“No court of appeals has issued any decision addressing those issues,” the filings says. “No case raising those issues has yet been litigated to final judgment in a district court. And this case does not present any of those constitutional issues in a suitable posture, because it involves only the government’s effort to dissolve a preliminary injunction entered months earlier, which the government decided not to appeal.”

Another brief filed by Lambda Legal and OutServe-SLDN, which are behind another case called Karnoski v. Trump, asserts “there is no urgency warranting this court’s immediate intervention.”

“The government rests its argument for certiorari before judgment on a nebulous and ill-defined need for immediate review it never precisely articulates — much less grounds in any concrete (as opposed to hypothetical) harm,” the brief says. “But there is no urgency warranting the extraordinary relief the government seeks.”

Last month, the Trump administration asked the Supreme Court to take up legal challenges to the transgender military ban for review on the basis that decision must be come if justices were to adjudicate the cases fully before the end of the term in June 2019.

The Justice Department made the requests as lower appellate courts considers whether an implementation plan Defense Secretary James Mattis earlier this year amounts to a change to the transgender military ban, which President Trump declared via Twitter in June 2017. Trial courts enjoined the Defense Department from enforcing the policy even before the plan was issued, the Trump administration has argued before those the courts should lift those orders in the wake of the new plan.

It would be unusual for the Supreme Court to issue a writ of certiorari, or decide to take up the transgender military cases, at this time before the appellate courts have rendered their decision on the Mattis plan.

On Friday, the LGBT legal groups followed up on filings urging the court not to take up the cases at this time with additional briefs urging justices to turn down the Trump administration’s other request to place a stay on orders against the ban, which would effectively allow the policy to go into effect.

One filing from the National Center for Lesbian Rights and GLBTQ Advocates & Defenders argued the balance of equities in the cases support the continuation of the injunctions ordered by lower courts.

“There is simply no irreparable harm, let alone a change in the balance of equities, that warrants a stay of the district court’s considered judgment to leave the preliminary injunction in place,” the brief says. “In fact, equity strongly favors respondents, who stand to lose their safety, stature and future in the military without the preliminary relief afforded by the injunction.”

Another brief from Lambda Legal and OutServe-SLDN made a similar case, saying the U.S. military won’t be harmed without a stay, but transgender service members would “suffer serious irreparable injury.”

“Plaintiffs who seek to enlist would be barred from doing so,” the brief says. “Plaintiff Jane Doe and other current service members who have not yet come out would be forced to either suppress their gender identity or face discharge. And those who have come out in the reliance on the Carter Policy would be forced to serve while branded as inherently inferior, unfit to serve, and a danger to their colleagues.”

Shannon Minter, legal director for the National Center for Lesbian Rights, said he expects the Supreme Court to issue decisions on the Trump administration’s requests “soon, probably within the next two or three weeks, possibly even sooner.”

“Since the government is asking for a stay only if the court denies cert before judgment, I assume the court will consider the two petitions together,” Minter added.