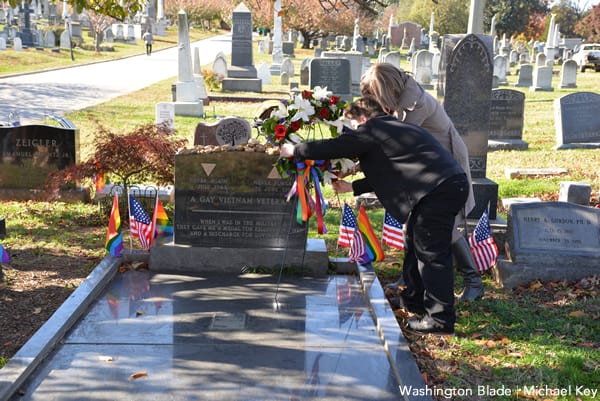 The Veterans Day event, organized by the D.C. Center for the LGBT Community, included remarks by Major General Tammy Smith of the U.S. Army Reserves, who disclosed her status as a lesbian in 2012 shortly after the repeal of the military’s ‘Don’t Ask Don’t Tell’ policy.

Organizers have said the annual wreath laying event is held at the Matlovich gravesite because of Matlovich’s pioneering role as an advocate for ending the ban on allowing LGBT people to serve in the military when he disclosed his sexual orientation as an active duty airman in 1975.

At the time he came out on the front page of the New York Times and a short time later on the cover of Time magazine, Matlovich had served in the Air Force for 12 years and had been awarded a Bronze Star and Purple Heart for exemplary service. He became an outspoken advocate for LGBT rights after his discharge from the Air Force for being gay.

“We stand here because we know that as an airman he was exceptional,” said Smith, who appeared in uniform. “He came out to himself and then he came out for all of us,” she said. “So standing at this place, this is a bridge. This is a bridge between the service of Leonard and the service of all of us who have gathered here today.”

“By bravely stepping out into the light Sgt. Matlovich forced the United States to recognize that there were gay men and women serving and protecting the very liberties they so often were refused,” Kelly told the gathering. “Today after a long fight gay men and women are able to serve proudly, openly, and with distinction,” she said.

“Unfortunately, at the same time there are an estimated 15,000 transgender people serving in the military who still serve in the shadows,” Kelly said. “On this Veterans Day let’s celebrate all veterans and recognize and hope that the liberties they fought to defend will someday be equally shared by all.”

Ely Ross, director of the D.C. Office of Veterans Affairs, read a letter sent by Mayor Muriel Bowser greeting participants of the wreath laying ceremony and praising the role that veterans, including LGBT veterans, play in contributing to the life of the District.

Others speaking at the event included Rev. Abena McCray of Unity Fellowship Church of Washington, who delivered the opening prayer and Rev. Eric Eldridge, Interfaith Minister for the D.C. LGBT Center, who gave the closing prayer.

Scott Gunn, an official with the LGBT Fallen Heroes Fund Memorial, gave an update during the ceremony on the status of that memorial, which is planned to be built soon in Congressional Cemetery. Gunn said the memorial will be a tribute to LGBT law enforcement officers and firefighters who lost their lives in the line of duty.

Smith, who is one of the highest-ranking LGBT service members, read from a letter that World War II era U.S. Army General Jonathan Wainwright sent to troops serving under him who were about to be discharged from the Army at the end of the war in 1945. Although Smith didn’t say so directly, she appeared to be comparing Wainwright’s concerns about fascism and totalitarian countries that he said were the cause of World War II to the tumultuous U.S. political situation under the Trump administration.

Smith continued to quote from Wainwright’s letter in which he urged his troops to become community leaders “as soon as you put on your civilian clothes. If you see intolerance and hate, speak out against them. Make your individual voices heard, not for selfish things, but for honor and decency among men, for the rights of all people.”

Upon finishing reading the Wainwright letter, Smith said, “We stand here today because we know that if we are going to keep the gains that we have made both as a nation and as individuals that we must always, always, always stay close to that bridge of courage because it’s up to us to make sure that those gains we have made never have a chance to be rolled back.”