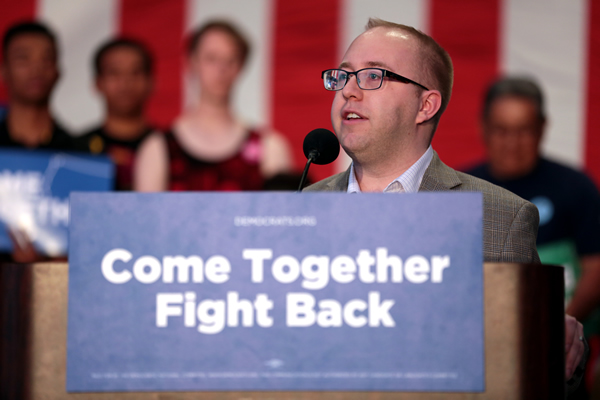 Jason Rae, who as the first openly gay secretary for the Democratic National Committee made his national debut Tuesday night reading the roll call for states in the formal nomination of Joe Biden, has a personal anecdote to tell about the presidential nominee.

When Rae was in a different role as a page in 2003 for the U.S. Senate, Biden, then a U.S. senator representing Delaware, introduced Rae to an important visitor.

“Then Sen.-Joe Biden came and said, ‘Hey, hey, come here, I got to show you something. I want you to meet somebody,’” Rae said. “And he came and introduced us to the Dalai Lama. Here’s a 16-year-old kid — fresh in D.C. from Wisconsin for me — and here’s the senator who is wanting to make sure that we get these experiences and having such interest in that.”

In addition to his duties as DNC secretary, Rae is one of 635 LGBTQ delegates to the 2020 Democratic National Convention. An uncommitted delegate representing his home state of Wisconsin, Rae hails from Glendale, Wis., a suburb of Milwaukee and just outside the city where the half-virtual, half-live convention is taking place.

For many Biden supporters across the country, the goal for the election is simple: Defeating President Trump and removing him from the White House. Rae, however, said from his perspective there’s more to it.

Rae, now 33, said the election for him is about making sure “we’re really going to move our country forward on a number of issues, including LGBTQ rights.”

“I know Joe Biden’s still gonna push to pass the Equality Act within his first 100 days, reverse Trump’s ban on transgender military service, really push in a holistic way,” Rae said. “I think the Biden-Harris administration understands that LGBTQ equality is a civil rights issue, and that they are going to take the concerns of our community forward.”

Rae is among LGBTQ delegates who spoke to the Washington Blade and said they don’t just want the election to be about getting ridding of Trump and anticipate results once Biden and his running mate Kamala Harris are elected.

Earl Fowlkes, a D.C.-based gay Black activist and chair of the Democratic Party’s LGBTQ Caucus, said “of course there’s more” than beating Trump and making that case will be a winning element to Biden’s election.

“I think we made a mistake in 2016 of believing saying that I’m not Trump is a winning formula,” Fowlkes said. “People have to have a reason to vote. It’s not just because of Trump and who he is, but because of what we offer in response to Trump’s policies. We’re offering comprehensive inclusive policies that will lift up all Americans, especially those who are most vulnerable, such as our transgender sisters and brothers and people who are poor.”

Fowlkes also said promises from Democrats have to be more than just talking points and must be acted upon swiftly in the next administration.

“It has to be really instituting policy changes, and in the first 100 days of the administration,” Fowlkes said. “It has to happen.”

The 635 delegates at the 2020 Democratic National Convention, which includes 30 transgender delegates, make up a sizable portion of the 3,979 delegates who are part of the event.

Fowlkes conceded his interaction with the LGBTQ caucus is limited because of the virtual nature of the convention, but was hopeful it would nonetheless infuse delegates with enthusiasm just before the election.

“We won’t have these huge rallies when you’ll be able to say the candidates all fell flat, or there’s a lot of enthusiasm people are carrying more than they’re sure before,” Fowlkes said. “We don’t have that so we’re gonna have to do really one-on-one and use social networks to really drill down deep and convince queer people to vote.”

The perspective there’s more to electing Biden than getting rid of Trump stands in contrast to the general public, according to a recent survey from the Pew Research Center made public last week.

A majority of Biden supporters — 56 percent — say their top reason for backing the candidate is “He is not Trump.” Other factors, including leadership, personality and policy, didn’t even break 20 percent.

For Trump supporters, the reasons for backing him were more spread out: 23 percent cited leadership, 21 percent cited policy, 17 percent said he’s for American values. “He is not Biden” came in at 19 percent.

Glen Paul Freedman, an Atlanta-based gay delegate for the Democratic convention, said getting rid of Trump is “a top priority,” but “it’s not just so much” that goal, citing among other issues the president’s authority to appoint justices to the Supreme Court.

“There’s other things that are outside LGBTQ rights, whether it be for you know personally for health care, or just in a society that treats people with dignity and respect,” Freedman said.

With Biden continuing to lead in the polls against Trump, LGBTQ advocates are also beginning to pile on the demands they want to see upon election of the Democratic nominee to the White House.

Annise Parker, former mayor of Houston and CEO of LGBTQ Victory Institute, said in a statement a coalition of 31 organizations will support the effort.

“Presidential appointees have tremendous influence over the policies and direction of federal agencies and the executive branch, so it is essential LGBTQ people are included both in high-level positions and throughout the next administration,” Parker said. “There is an LGBTQ person qualified to fill nearly every position in the next administration and this coalition is determined to help them navigate a complex appointments process to ensure we are well represented.”

Democrats are making promises they plan to deliver. Among them is Rep. David Cicilline (D-R.I.), who was among the high-profile speakers at the convention’s LGBTQ Democratic caucus on Tuesday.

Cicilline in his remarks envisioned passage of the Equality Act, legislation that would update the Civil Rights Act to expand the prohibition on anti-LGBTQ discrimination under the law.

“With Joe Biden as our president, it will become the law of the land, so this is an important election for our count,” Cicilline said. “It is not an understatement to say our very democracy depends on it, but our community has a special interest in this, because we can elect a president and a vice president who have a long record committed to full quality for our community, and we’re fighting against a president who has in every way undermined full equality.”

Other high-profile speakers at the LGBTQ caucus were Chicago Mayor Lori Lightfoot, who represents the largest city to elect an openly LGBTQ mayor, as well as lesbian Sen. Tammy Baldwin (D-Wis.) and Rep. Mark Takano (D-Calif.). The virtual caucus had 5,390 page views from 3,050 unique devices, a spokesperson for the Democratic National Committee told the Blade.

Freedman, CFO and CEO of the Stacey Adams-backed Fair Fight Action, didn’t hold back in his assessment of Trump, saying Republicans supporting him are racist.

“I just think that a party with a leader who is a racist, and I believe that some of the people in his party are racists, and now feel that they have over the last four years — and even more going up into the election…been more public about their voice about being racist, and that they would like to see America turned back,” Freedman said. “So, I can’t imagine anyone who is voting does not see this or not understand why it is so important to make a huge change here in America.”

Rae said Biden, as well as his running mate Sen. Kamala Harris (D-Calif.), would bring a new day to the White House.

“Right now, we have an administration, right now in Donald Trump and Mike Pence, who have really used all of their power to fight against LGBTQ rights,” Rae said. “So for me, this is a struggle for our community, and this is an opportunity for us to elect two leaders in Joe Biden and Kamala Harris who are going to fight for the LGBT community, each and every day.”

Rae is confident LGBTQ lives would improve under Biden based in part on his interactions with the candidate. Since his time as a Senate page, Rae said he has spoken with Biden, both in his capacity as vice president and 2020 presidential candidate, most recently at the New Hampshire State Party Convention.

“Last fall we had an opportunity to chat for a little bit and I just really find them both to be — genuine is the best word I can find — because it’s real,” Rae said. “They are real people who really care.”