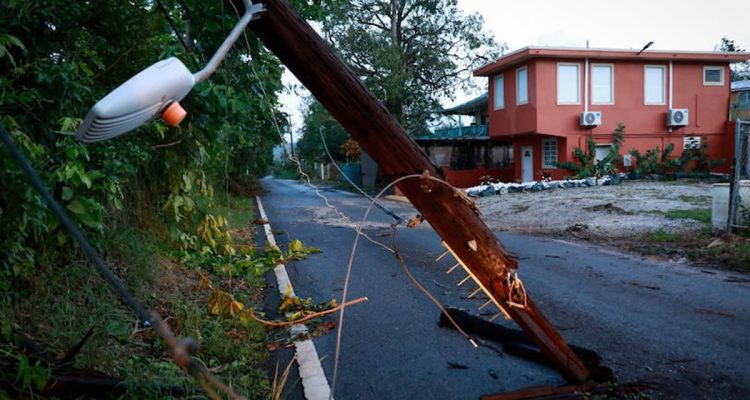 Eliana Rodríguez and her father Javier floated on a mattress and pieces of broken debris in flood water in Utuado, Puerto Rico, praying help would come for hours.

“The rain kept falling and never stopped,” Rodríguez said of the flood water that filled the home she shared with her father. “We sat in the dark when we lost power and when the water became too much, we prayed.”

Hurricane Fiona made landfall on Puerto Rico’s southwestern coast on Sept. 18, inundating Utuado and the surrounding area with 30 inches of rain.

Neighbors eventually rescued Rodríguez and her father. They have now relocated to New York with family, unsure when or if they will return.

Rodríguez still grieves for the things she lost in the flood that made her house a home.

Fiona, which made landfall two days before the fifth anniversary of Hurricane Maria, knocked out power across Puerto Rico. People in the U.S. commonwealth since Fiona’s landfall continue to struggle with a lack of electricity, drinking water, food and medical necessities.

Rodríguez’s father, who has a heart condition, went without his medication until they reached the U.S. mainland, where they battled medical red tape to finally get the medication her father needs.

As recovery efforts continue to evolve on the island, humanitarian and grassroots organizations have flocked to “la Isla del Encanto” (the Island of Enchantment) to help Puerto Ricans rebuild.

Agriculture and infrastructure are among the hardest hit industries on the island.

Wilfred Labiosa, executive director of Waves Ahead Puerto Rico, an organization that offers support to marginalized and vulnerable communities, including the LGBTQ community, is helping with recovery efforts.

According to Labiosa, necessities like electricity, drinking water and mental health aid continue to be grave needs that are still unmet and the government is unsure when relief will come.

“They’re saying water is coming sooner than electricity, while getting electricity to some parts of the island could take months,” Labiosa told the Washington Blade during a telephone interview shortly after Fiona’s landfall.

Labiosa, along with many other Puerto Ricans, has sharply criticized the government for its lack of adequate leadership and oversight of LUMA Energy, the company that holds the exclusive contract to provide electricity to the island. LUMA Energy, which faces zero competition, has consistently failed to provide stable electricity to residents, even before the hurricane.

Waves Ahead, in collaboration with World Central Kitchen and José Andrés, provides meals for those in need across the island.

Like most small nonprofit organizations, Waves Ahead relies on donations and funds from the government to provide for those in need. And despite multiple visits by federal legislators, Waves Ahead has not been selected to receive federal aid funds, and Labiosa says that lawmakers do not mention the LGBTQ community in discussions of relief efforts.

Fiona’s effect are traumatic, Labiosa says the storm’s destruction hurts more because of the response from Puerto Rico’s central government and local municipalities.

“We haven’t learned anything in the last five years,” Labiosa said, referencing to Maria’s devastating effects.

Labiosa highlighted the burden of outdated infrastructure on the island, which the government has received millions of dollars to improve yet has not.

“The temporary bridge was supposed to be replaced two years ago,” Labiosa said in reference to Bridge PR-123 in Utuado that was built after Maria, and washed away the day Fiona made landfall.

Waves Ahead is also working on a partnership with the Ricky Martin Foundation to provide resources and help to all affected by Fiona, including focused efforts on the LGBTQ community.

Just like Labiosa, Arianna Lint, executive director of Arianna’s Center, is calling for mental health aid as well as other necessities.

“We have a very high suicide rate in our community,” Lint said.

For more than five years, Arianna’s Center has worked extensively in Puerto Rico, serving people of the LGBTQ community through community development and federal legislative efforts.

Lint and Gilead Sciences have partnered in an effort to ensure that those living with HIV/AIDS are receiving the medical care they need in the aftermath of the hurricane and destructive flooding.

“One of our largest aliados (allies) is Gilead Sciences, who is promoting the use of PrEP,” Lint said.

Parts of the island that remain inaccessible due to mudslides and debris from the storm are finding it hard to receive help, especially when it comes to health services for the elderly.

“Our greatest focus is on people left behind and senior people in our community,” Lint said.

As cleanup and recovery efforts continue in Puerto Rico, one thing is for sure: Cleanup will be a slow process, and many, like Rodriguez and her father, will be faced with the decision to leave their island or stay, uncertain when the cavalry will come.