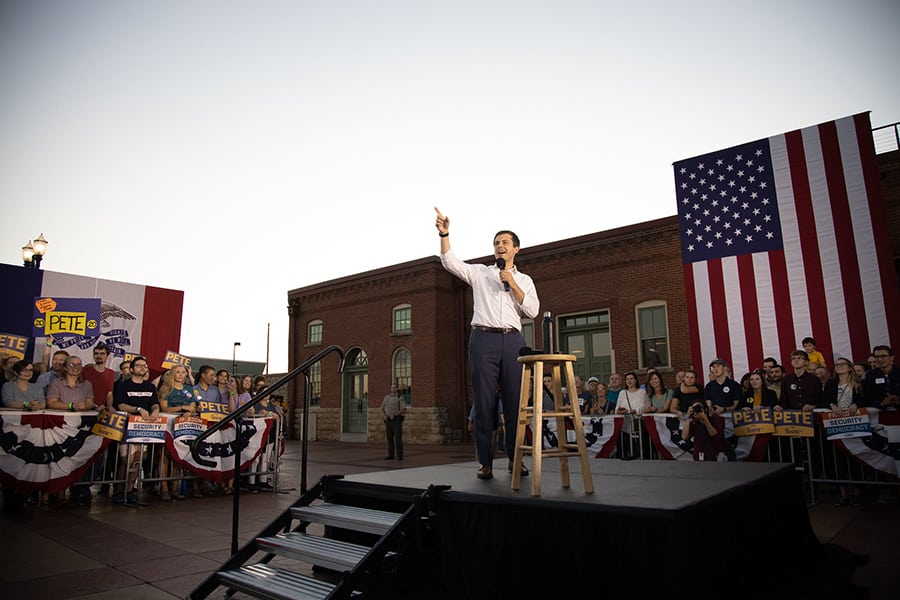 Pete Buttigieg, who has served as mayor of South Bend, Indiana since 2012, came out as a gay man in a self-penned essay published by the South Bend Tribune. This past April he declared his candidacy for President of the United States. Mayor Buttigieg and I spoke on the phone about his campaign, his values, and who he looks up to in the LGBTQ community.

MS: When you entered the race as an openly gay man, did you realize the historical significance and what the LGBT community expected?

PB: You know, it’s one thing to realize it in theory; it’s another to see it play out in practice. Seeing teenagers come up to me and let me know what this campaign means to them, and folks who are of a different generation, who just never thought that they would see this, sometimes coming up with tears in their eyes, really has made me feel a different level of awareness and fulfillment but also responsibility around that fact about this campaign.

PB: Wow, well of course anybody who seeks office and is out owes a lot to Harvey Milk and the tradition that he now represents. It’s almost impossible to imagine, I think now looking back, what that would have meant at the time. And then more recently, in my own lifetime, I remember seeing the judiciary hearings, when they were trying to impeach President Clinton, and seeing Barney Frank just run circles intellectually around so many people. Realizing that he was also an out member of congress I think changed my awareness of what was possible. I also admire people who have come into the public eye recently, some even later than I have. Danica Roem in Virginia, just extraordinary the way she has been able not just to break barriers and challenge the backwards-looking culture warrior that she beat but also to do it in a way that truly focused on her constituents, and talk about issues like traffic and commuting as well as issues like equality. There’s so many really inspiring figures out there, Annise Parker, I could go on and on. And obviously I’m aware that I’m standing on the shoulders of so many who helped pave the way.

MS: It’s sort of amazing that in just a few short decades we went from zero candidates running for public office to a man like yourself now running, openly gay, for President of the United States. Have you sought advice from some of those pioneers like Barney Frank or Tammy Baldwin or Elaine Noble?

PB: Yeah, I’ve had a chance to meet Tammy Baldwin, and again Annise Parker has been a great source of encouragement and support as well as advice. I’m not sure what’s more amazing, the fact that we’re the first to do this or the fact that we can do it at all. Part of just living it seems strange that I’d be the first major candidate to do this, then again you think about where we were just a decade ago.

MS: That’s a great point. Many in our community never thought we’d see someone being so open and running for President, and we’d always looked at what that opposition would look like. While you’ve been running, the largest number of those opposing you have been religious protesters, and you’ve been very good by saying ‘I’m going to be judged by my god, not by you.’ Is there a time that either on a personal level or on the campaign that you’ve faced homophobia one-on-one?

PB: Well yeah, somebody will come up on a rope line and have something nasty to say, or you see stuff coming in the mail, although I don’t pay too much attention to that. But I gotta say that any homophobia that comes my way is less concerning than what’s happening to so many youth and really vulnerable people out there of any age around the country, what’s happening to black trans women endangering their life, I try not to dwell on the irritation of any of the nonsense that might come my way because I’ve got, I can feel all the support that I have, folks from my own team, and from millions of people out there. I think of all the people who don’t know that they have that support, who don’t know that we’re rooting for them when they’re dealing with whatever it is their up against.

MS: One of the most amazing similarities I see in your campaign is one I saw in President Obama’s campaign. When he was a candidate, being the first major African American running for President, he kept running up to the race issue no matter how many issue papers he put out on certain subjects. Similarly, you’re the first out gay man, and therefore no matter how many issue papers you put out, it still comes up. President Obama, then candidate Obama, did something spectacular. He decided he had to address the issue in a major speech in March of 2008, just on race. Do you think if that one issue keeps plaguing you, you’re going to have to give the LGBT equality speech, and are you prepared to do that?

PB: Well, I’m not sure my equivalent of that speech will be a speech, although it might be. I think it is important for folks to hear me tell my story, and while I’ve done it in a number of ways, I may need to find new ways to do it. I think not only about President Obama’s example, but also the steps that President Kennedy had to take to reassure voters that they could vote for the first Catholic President. So often it comes into form, and I remember this from 2008, is people saying ‘this is not an obstacle for me but I’m just not sure about everybody else,’ and finding a way to speak to that and stay ahead of it. I think we’ll continue seeking the right ways to do that, true to who I am and true to what we need to convey as well.

MS: There’s this old political saying, politics is a dime and a day, meaning politics can change on any given issue, and you can’t stay in politics unless you raise funds. You’ve had an incredible success at raising funds. In fact, so well, that you are basically one of the only candidates who can stay in the entire game if they wish up to the convention. You have an enormity of support from the LGBT community, which would like you to stay in through the convention. Do you feel an obligation that regardless of where the polls go or where the votes go that you need to stay in just to be front and center on this issue?

PB: Well, you know, I think there’s so many things that motivate this campaign. We’re certainly conscious of the historic nature of it, and at the same time, there are many reasons why we’re in this and why I’m going to stay in it. We want to know that I’ve got the resources to go the distance. And if you say not knowing how things may evolve even from week to week, I’m glad that we do, because the very same things that can be a disadvantage in terms of an issue that’s visible or something that’s in the news, sometimes what’s making things harder for you politically can turn around and be an asset a few months or weeks later. So we’re definitely in this to go the distance and feeling increasingly bullish about how this is going to unfold.

MS: Some of the candidates who will be appearing with you at this week’s CNN Town Hall meeting on LGBT equality have long standing positions, Elizabeth Warren, Joe Biden, and have evolved on our issues long before most others. How do you differ from them on LGBT issues?

PB: I think we all have different areas of emphasis. I’m certainly proud of my record, not just in terms of my identity but what we’ve done because I think it’s important not to take for granted or assume that, just because I’m out, LGBTQ voters are going to automatically decide I’m the best person to make a difference in their lives. I think that what’s really important is to have a robust and strong plan. And to me, the equality act is very important but I hope it’s also understood that that’s table stakes, that there’s a lot more that we need to do proactively around issues like conversion therapy, protecting LGBTQ youth, attacking the AIDS epidemic, diplomacy around human rights including the way we think about how we treat refugees, work for community based programs. There’s so many things that we need to do that I think each of us has an obligation to put forward a robust plan and not simply make it seem as though we think that the struggle was won when marriage equality came to the land or that the equality act is all we’ve got to do.

MS: One of the most important things you do is the fact that you’ve become a role model for LGBT youth. That’s a heavy responsibility. How does that weigh on you?

PB: You know, I liken it to a moment of growth that happened to me, around what’s now been a very small thing when I was mayor, which was, when I was a candidate I used to think, when I was riding a bike, a little bit of irritation, oh I better wear a helmet because if somebody sees me without one they’re going to say something. And somewhere along the line I realized my responsibility was different, and I started thinking I better wear a helmet because somebody might see me without one and decide not to, and I’d be responsible for their safety. And I think it’s the same now on a much bigger stage. When people are looking to you, and people see in you so much more than one person can really be, you realize that it’s not just you but what you’re building. And to me, the best way to make good on that is not only to seek to act with integrity and do the right thing, but also to make sure that our campaign organization shows the values that we’re trying to promote, including the idea of belonging. It’s part of what I’m trying to build for the whole country. And I’m very mindful of the obligation to live up to the need to model and support those values, knowing just how many people have pinned their hopes on the conduct of this campaign as well as its outcome.