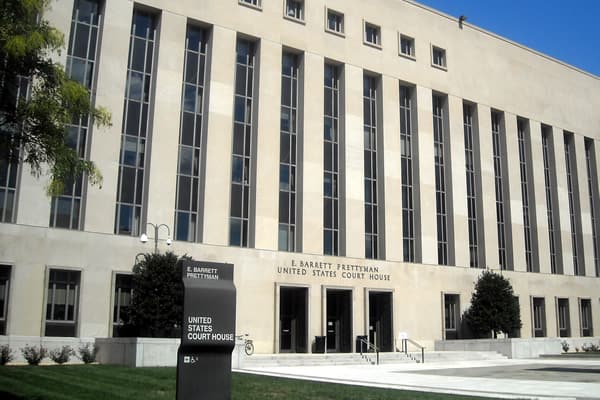 A three-judge panel on the D.C. Circuit Court of Appeals gave no clear signal during oral arguments Monday on whether they’d keep in place one of four injunctions against President Trump’s transgender military ban, raising the real possibility the panel would reverse the order against the policy.

After one hour of arguments in which a dominant theme was hair-splitting over the difference between being transgender and having gender dysphoria, the questioning left no clear indication of the eventual ruling. One judge seemed poised to reverse the injunction, another seemed inclined to keep it and the other gave mixed signals.

At issue is whether U.S. District Judge Colleen Kollar-Kotelly should have lifted her preliminary injunction against Trump’s transgender military ban in the aftermath of the report of Defense Secretary James Mattis in March justifying Trump’s plan to exclude transgender people. Although the Mattis policy generally bars transgender people from service, it exempts those who’ve already come out during the period of open service that started under Defense Secretary Ashton Carter during the Obama years. The Mattis policy also allows transgender troops who enlist in the future or who have yet to come out to continue to serve as long as they don’t transition.

Much attention was placed on the distinction Mattis placed in his implementation on service members who are transgender and transition and those who continue serving in their biological sex. The Mattis policy would allow transgender people to serve as long as they serve in their biological sex and “do not require a change of gender and remain deployable within applicable retention standards.”

Representing the Trump administration before the court was Justice Department trial attorney Brinton Lucas, who argued that provision in the policy — as well as the part allowing the estimated 937 transgender troops who came out in the Obama years to stay in the military — demonstrates the Trump administration has changed its approach and lifting the injunction is warranted.

“Their entire argument is we haven’t changed,” Lucas said. “We believe that we have.”

In his closing remarks, Lucas called it “truly extraordinary” four separate courts have placed injunctions against the transgender military ban and said the U.S. government is calling for a “simple amount of deference,” much like the U.S. Supreme Court ultimately awarded the Trump administration on the travel ban to Muslim countries.

Arguing on behalf of the National Center for Lesbian Rights and GLBTQ Advocates & Defenders in favor of keeping the court injunction in place was Jennifer Levi, who said the Mattis policy “bans only transgender people and all transgender people” and gender dysphoria is a “defining characteristic” of being transgender.

Williams — who told Levi “the record in the case is against you” — repeatedly referenced the portion of the Mattis recommendations allowing transgender people to serve in their biological sex, pointing to a RAND Corp. study finding 18 percent of transgender service members reported having no desire to undertake transition.

“There seem to be people who spend decades in their biological sex and then decide to transition,” Williams said.

When Levi responded those service members don’t wish to transition “because of discrimination,” Williams said the terms “do not wish” demonstrates a subsection of transgender people who are fine for the time being in their biological sex. Levi, however, said the distinction “doesn’t remedy the constitutional injury” against transgender and warrant lifting the injunction against the policy.

“Gender dysphoria here is being used as a proxy to exclude transgender individuals,” Levi said.

A couple of times issues became contentious between Williams and Levi. When the judge asked the attorney to comment on the transgender experience in terms of the “world” as opposed to proposed policy, Levi commented on the “Carter world” of open service, Williams scoffed and said that wasn’t sufficient.

“The government is playing word games by arguing that transgender people can serve in their birth sex. That is a contradiction in terms,” Levi said in a statement after the arguments. “This is not a game. What’s at stake here is the lives of dedicated service members, who are willing and able to serve—and are prepared to make the ultimate sacrifice for their country.”

In contrast to Williams, Griffith repeatedly asked whether heightened scrutiny for laws against sex discrimination should apply to the transgender military ban, indicating he may be inclined to uphold the order against the policy.

When Griffith asked Lucas whether there are transgender people who can serve in their biological sex, Lucas replied, “Yes,” referencing those who don’t wish to transition because, for example, they identify as non-binary. But when Griffith posed the same question to Levi, she compared the situation to allowing gays to serve in the military while requiring them “to act heterosexually.”

Griffith also asked Lucas whether the grandfather clause in the Mattis policy allowing transgender people who came out during the Obama years undercuts the rationale for the policy. In response, Lucas said the military has different standards for accession than it does for retention, noting the military keeps service members with PTSD, high blood pressure and sleep apnea, but doesn’t have the same policy for their enlistment.

Despite those questions, Griffith also voiced concerns over judicial precedent requiring the judiciary to give deference to the military over combat readiness, pointing out the proposed ban used to be the policy of the military until the final year of the Obama administration.

“You are asking the court to make decisions we are not equipped to make: Who is combat ready and who is not” Griffith said.

Levi responded the courts must still apply the “same level of scrutiny” they would otherwise apply to discriminatory policy.

“Under any level of scrutiny the Mattis plan fails because it’s rooted in discrimination,” Levi said.

Wilkins was the hardest judge to read on the panel, but seemed inclined to allow the injunction against the ban to remain in place. Wilkins asked for a distinction between the transgender polices as they evolved during the Obama and Trump eras, asking whether anything has really changed with the new policy Mattis proposed.

Arguments took place before the D.C. Circuit shortly after the Justice Department filed petitions with the U.S. Supreme Court calling for review before appellate courts made their decisions on the policy. It would be highly unusual for the Supreme Court to take up the case at this stage in the litigation process. On Friday, Kollar-Kotelly denied a request from the Justice Department to lift her injunction against the ban as the Supreme Court considers whether to take up the petitions.