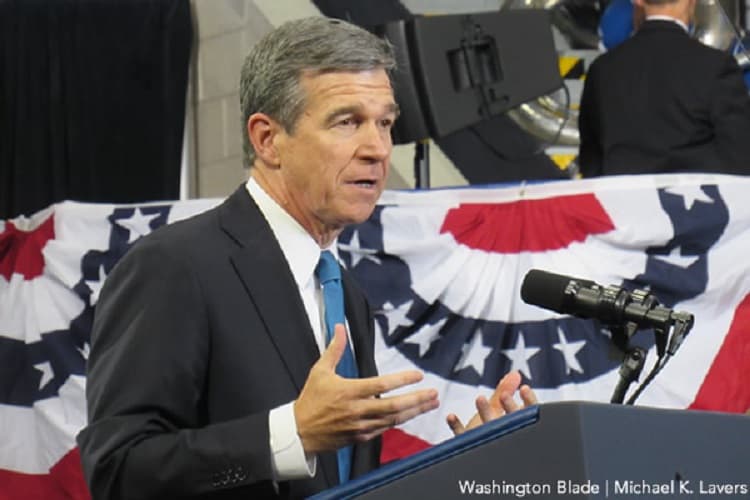 Amid continuing threats to North Carolina’s economy as a result of House Bill 2, North Carolina Gov. Roy Cooper has made a new proposal to convince state lawmakers to come to an agreement on lifting the anti-LGBT law, although the response from LGBT advocates is lackluster.

Cooper unveiled the three-part proposal during a news conference on Tuesday with Democratic leaders in the legislature, Reps. Darren Jackson and Sen. Dan Blue, warning that economic consequences would continue to befall North Carolina if action isn’t taken.

“I know North Carolinians are tired of hearing about this,” Cooper said in a statement. “HB2 has divided us and stained our reputation. I’ve proposed a common sense compromise that will get HB2 off the books and address concerns on both sides. It’s time for Republican leaders to step up and lead their members because February needs to be the month we get this done.”

Cooper’s repeal proposal comes on the heels of a letter from the North Carolina Sports Association to the state legislature informing lawmakers that keeping HB2 on the books will result in the loss of all NCAA championship events through 2022 and an estimated loss of $250 million in revenue for the state. As a result of economic boycotts over the law, including cancelled business expansions and events from performers in the state, North Carolina has already lost an estimated $600 million in revenue.

Signed into law last year by former North Carolina Gov. Pat McCrory after a single day of consideration by the Republican-controlled legislature, HB2 bars cities from enacting pro-LGBT ordinances, nullifying one recently enacted by Charlotte, and prohibits transgender people from using the bathroom in schools and government buildings consistent with their gender identity.

Lawmakers enacted HB2 after stoking fears that the Charlotte ordinance would enable men to enter women’s restrooms and commit sexual assaults, although that claim is baseless because similar laws exist in 19 states and more than 100 cities across the country and no such incidents have occurred.

Cooper’s proposal seeks to repeal HB2; here are the three components of the plan:

The offices of House Speaker Tim Moore and Senate President Phil Berger didn’t immediately respond to the Washington Blade’s request for comment on whether the Republican-controlled legislature would accept the proposal.

In December, North Carolina held a vote to repeal HB2 as part of a deal with Charlotte in which the city agreed to rescind its LGBT non-discrimination ordinance, which had prompted the state legislature to retaliate last year by passing HB2. But that repeal effort was thwarted after Republicans insisted on including a cooling off period in the bill that would prevent cities for six months from enacting pro-LGBT ordinances and Democrats wouldn’t agree to it.

During his campaign against McCrory, Cooper pledged not only to repeal HB2, but also support of statewide non-discrimination protections. A separate proposal introduced by House and Senate Democrats would accomplish both of those goals, although Cooper hasn’t explicitly supported the legislation and instead moved his own proposal.

LGBT groups that endorsed Cooper as a means to repeal HB2 issued statements in response to his proposal saying the compromise is unnecessary, although they wouldn’t name Cooper as the originator of the idea and instead criticized Republicans.

JoDee Winterhof, senior vice president of policy and political affairs at the Human Rights Campaign, said Republican leaders “continue to leave the people of North Carolina in harm’s way with their consistent failure to act.”

“Today’s proposal is yet another chance to fix this mess, but it adds unnecessary language addressing problems that simply do not exist,” Winterhof said. “LGBTQ people are the ones at risk every day HB2 remains on the books, and transgender people especially continue to bear the brunt of this shameful politicking. North Carolinians deserve a full, clean repeal of HB2. When that happens, it will only be the beginning of steps needed to restore the state’s deeply tarnished reputation and economy. It’s far past time to move North Carolina forward.”

Chris Sgro, executive director of Equality North Carolina, said Cooper’s proposal is “unnecessary” because other localities have enacted non-discrimination protections and had no problems.

“Tim Moore and Phil Berger are acting against the best interest of our state and the LGBTQ community,” Sgro added. “They are treating our economy like a political football and trying to cast blame on everyone else for their failure to actually repeal HB2 in December. At this point, we all know what the answer is — full repeal of HB2. Only a full repeal of HB2 will fix our state, allow businesses to come back and allow for the safety of LGBTQ North Carolinians.”