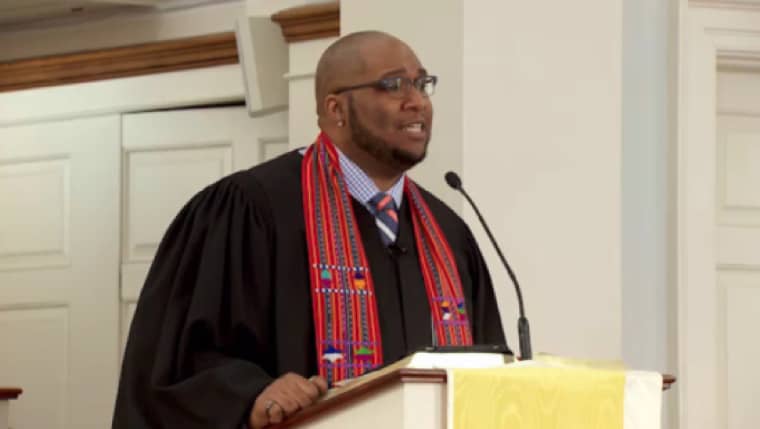 “Iyanla Fix My Life,” the hit one-hour series on Oprah Winfrey’s OWN network returned for its third season in a major way on Sep. 19. Vanzant, a life coach, Yoruba priestess and author tackled one of the greatest taboos in the black community and traditional black church: homosexuality. She did so by working with two closeted gay ministers, Rev. Derek Terry of Cincinnati, Ohio and Rev. Mitchell Jones of Richmond, Virginia, both of whom had yet to fully come to terms with their sexual orientation or admit their truth to their loved ones and congregations.

Georgia Voice spoke with Terry following the conclusion of the three-part series on Oct. 3, along with Pastor Vincent Brown of The Outlet Church, an LGBT inclusive ministry in Valdosta. Terry and Brown have never met, but their experiences as faith leaders who also happen to be gay and the reaction from those around them are strikingly similar. While much of the world is making progress on gay rights, the church continues to be a source of pain and internal conflict for those who identify as gay.

Terry used the show’s platform to come out to his family as a “black gay man who ministers” and spoke to Georgia Voice about life after receiving national attention.

“Since the show my relationship with my family is a million times better,” says Terry, who tells Georgia Voice that he hadn’t spoken to his mother for months prior to the taping.

“She accused me of being gay one day via text,” he says. Terry says the text led to a complete breakdown in communication between he and his mother.

“It caused me to reach out to Iyanla because I wanted to fix this thing with my family,” he says.

A product of the African Methodist Episcopal Church, Terry, who now ministers through the United Church of Christ (UCC), says he received God’s calling to ministry at the age of 19 and battled internally with the homophobic messages he received from the church and what he knew to be true about himself, often questioning whether or not God truly loved him.

“The church is so quick to give condemnation or a head nod,” he says. ”That’s why so many of us struggle with whether or not God loves us. “A lot of churches really don’t want you to conform they want you to assimilate. It’s really not about a relationship; it’s about convincing the church people that you’re good enough.”

“Fix My Life” viewers had a front row seat to Terry’s coming out to his congregation, which included his family, but he admits it almost didn’t happen.

“Honestly, I wanted to run,” says Terry. “I wasn’t going to do it. There were so many people there that was important to me.”

Like so many LGBT people of color, Terry was afraid of losing the support of his family and church. His father erased that fear, embracing him from the pulpit following his coming out and through tears said, “I love you, you’re the bravest man I know.”

We wear the mask

An openly gay minister and founder of The Outlet Church in Valdosta, Brown has first-hand experience with “church hurt” and the expectations for gay clergy to assume a heterosexual identity at the expense of their own truth.

“The church is in denial,” says Brown. “And when that happens you encounter people who are denied the oxygen of even living in truth because they’re told that’s not true,” he says.

An emerging spiritual leader in Valdosta and in the gospel music community, Brown tells Georgia Voice that he “wrestled a very long time” with his sexual orientation and his call to ministry.

“I was successful but I wasn’t fruitful because I was still battling,” he says. “Although everything looked prosperous, my soul was in bondage because I had a secret that I felt was so detrimental and destructive that if it got out it would destroy everything I had.”

The Outlet Church is an inclusive ministry that welcomes people from all walks of life, and Brown admits that many gay men sought refuge at his church, which initially made the formerly closeted minister uncomfortable.

“I could not shake the fear every time a gay man would come into the church. I didn’t want them there because I couldn’t shake my own fear,” he says. “And I didn’t want the stigma of being the gay church. All you need is a gay rumor and you can sabotage someone’s ministry.”

Brown says he became adamant about preaching against homosexuality while he was struggling to embrace his truth.

“My sermons were preached with a lot of anger because I was angry with who I was. And I felt that if I could show God how much I hated being gay, maybe I could get his attention to let him know I didn’t choose this,” he says. “It was a very selfish and cowardly tactic but it was my mask.”

Brown now leads The Outlet Church as an openly gay married man. He legally married his partner in a ceremony in New York in 2014.

It’s not a stretch to say that Brown would agree with Terry’s advice to LGBT Christians: “I am encouraging my LGBT family to find places that not only accept them but affirm them. We should not continue to invest our talents and energy in places that don’t love, value, appreciate and affirm us for all of who we are.”