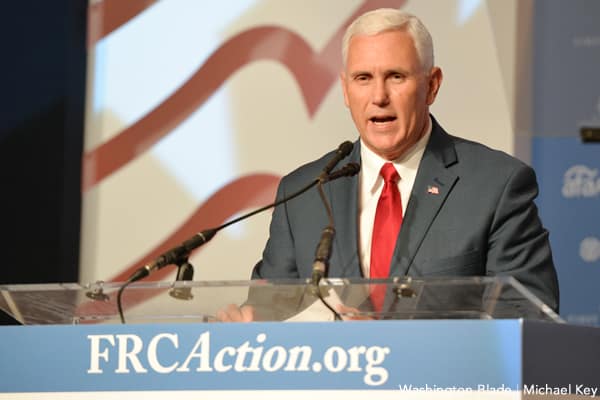 Imagine: President Trump has been impeached and removed from office after investigations reveal illegal collusion between his 2016 campaign and Russia, prompting Vice President Mike Pence to take the Oath of Office. Do you know how anti-LGBT your new president is?

Ongoing revelations about the Trump campaign’s connections to Russia and his firing of FBI Director James Comey as he was investigating those ties have led to some scattered calls for impeachment, including from LGBT rights supporters. But impeachment could lead to a potentially worse place if Pence becomes president and his administration is consistent with an anti-LGBT record that dwarfs Trump’s.

Sarah Kate Ellis, CEO of GLAAD, said the LGBT community would only need to look to Pence’s past as a member of Congress and Indiana governor to realize he seeks to harm LGBT people.

“Mike Pence has made it a priority to use religion as a weapon to harm the LGBTQ community ever since his first congressional campaign in 2000,” Ellis said. “By being the key influencer to President Trump’s religious exemptions executive order, supporting so-called ‘conversion therapy’ practices, and signing his anti-LGBTQ Religious Freedom Restoration Act (RFRA) as Indiana’s governor, Pence will do whatever he can to scale back LGBTQ acceptance and erase our community from the fabric of America.”

Pence’s anti-LGBT history prior to becoming Trump’s running mate is well-documented. Most prominently, Pence in 2015 as Indiana governor signed a “religious freedom” bill allowing businesses and individuals to refuse services and discriminate against LGBT people. After pressure from LGBT advocates and the business community, Pence was forced to sign a “fix” to the law significantly limiting its scope.

Pence’s record goes back to 2000 when he was first seeking a U.S. House seat and his campaign materials stipulating he would support HIV/AIDS funding on the condition that resources are directed to institutions that “provide assistance to those seeking to change their sexual behavior.” That has been interpreted as support for “ex-gay” conversion therapy, although Pence through a spokesperson has denied he ever supported the practice.

As a House member, Pence backed a U.S. constitutional amendment that would have banned same-sex marriage nationwide and was a vocal opponent of pro-LGBT initiatives, including hate crimes protections legislation, “Don’t Ask, Don’t Tell” repeal and a version of the Employment Non-Discrimination Act.

Pence’s opponents have taken him to task for his anti-LGBT record. Shortly before Inauguration Day, a group of dance protesters in D.C. twerked their way to Pence’s house in a protest over his anti-LGBT views. Just this weekend, more than 100 students at the University of Notre Dame walked out on Pence during his commencement address over his anti-LGBT views and the Trump administration’s approach to marginalized communities.

Given Pence’s extremely anti-LGBT record, there’s a clear distinction between the vice president and Trump, whom some supporters maintain is relatively pro-LGBT despite the administration’s actions, such as revoking guidance assuring transgender students have access to the restroom consistent with their gender identity.

Twice so far during the new administration, Trump — once in January and again earlier this month — considered, but ultimately declined to sign, a “religious freedom” executive order that would allow discrimination on the basis of religious objections to same-sex marriage, premarital sex, abortion and transgender identity. If Trump were removed from office and Pence was inaugurated as president, that executive order would get a fresh pair of eyes and new perspective.

Dan Pinello, a political scientist at the City University of New York’s John Jay College of Criminal Justice, said Pence has “accommodated his more conservative views” as vice president to avoid alienating Trump advisers like Ivanka Trump and Jared Kushner, but would revert to his old ways if Pence were president.

“After all, Trump recruited Pence as vice president precisely for the purpose of appeasing hard-core conservatives,” Pinello said. “So meaningful softening by Pence of his posture on LGBT issues would be both counter-intuitive and counter-productive as a political matter. Thus, a President Pence would probably be worse for our community than what Trump himself is, sad to say.”

But has Pence moderated his approach to LGBT issues since becoming No. 2 to Trump?

During an interview in February on ABC’s “This Week,” Pence said he was among those applauding when Trump mentioned LGBT people during his nomination acceptance speech at the Republican National Convention — a first for a GOP presidential candidate — and said he’d protect them from a “foreign, hateful ideology.”

“I think throughout the campaign, President Trump made it clear that discrimination would have no place in our administration,” Pence said. “I mean, he was the very first Republican nominee to mention the LGBTQ community at our Republican National Convention and was applauded for it. And I was there applauding with him. I think the generosity of his spirit, recognizing that in the patriot’s heart, there’s no room for prejudice is part of who this president is.”

David Benkof, a gay columnist for the conservative Daily Caller, said Pence “hasn’t said anything that I know specifically on gay issues” as vice president, making the case Trump is a “gay-friendly” president and has had a mitigating impact on Pence.

“To me, his silence is more than I might have expected from Ted Cruz’s vice president,” Benkof said. “Donald Trump’s overall gay-friendly approach has muted evangelical opposition to gay rights, and Pence is evangelical, and it’s really good news for queers.”

Benkof identified himself as a Hillary Clinton supporter and supporter of LGBT rights, although he said he backs a “religious freedom” carve-out allowing bakers and florists to opt out of facilitating same-sex weddings.

As vice president, Pence has delivered numerous speeches to religious groups, but hasn’t made a call for enabling anti-LGBT discrimination in the name of “religious freedom.” Instead, Pence has generally affirmed the importance of faith and, in terms of policy, stated the Trump administration pledge to repeal the Johnson Amendment, a 1954 law that bars churches from making political endorsements.

A speech that Pence gave earlier this month in D.C. at the World Summit in Defense of Persecuted Christians denouncing “persecution of any kind, of any faith, any place, any time” could just as easily apply to LGBT people as Christians overseas. (The Human Rights Campaign distributed a copy of that speech as part of an effort to encourage Trump to speak out against reported anti-gay violence in Chechnya.)

Pence’s relative silence on LGBT issues as vice president could change soon. The Faith & Freedom Coalition, an anti-LGBT group, announced Tuesday Pence would deliver the keynote address in D.C. at its annual Patriot’s Gala. That’s the same day Pride is set to take place in D.C. and the day before the Equality March for Unity & Pride.

Faith & Freedom Coalition Executive Director Tim Head said in a statement announcing the speech Pence has “consistently served as a champion for the pro-life, pro-family, pro-economic growth movement” in his various roles, including vice president.

“President Trump and Vice President Pence are bringing real reform to Washington and have delivered on their campaign promises to appoint an outstanding Supreme Court Justice, appoint the most socially conservative Cabinet in our nation’s history, and have achieved a number of pro-life and pro-family victories,” Head said.

If Trump and Pence are aligned on social conservative views, it’s hard not to believe the vice president had a hand behind the scenes in the administration’s anti-LGBT actions, such as rollback of the guidance in favor of transgender students.

Sarah McBride, national press secretary for the Human Rights Campaign, said Pence has built a career on anti-LGBT views and “that certainly hasn’t changed over the last several months,” attributing his worldview to the anti-LGBT actions under the Trump presidency.

“Vice President Pence bears full responsibility for the Trump administration’s anti-equality, anti-immigrant, and anti-science cabinet and the hateful policies they’ve begun implementing,” McBride said. “Time and time again, reports surface that Vice President Pence and his allies are continuing to push the administration to take additional steps allowing a license to discriminate against LGBTQ families. From undermining protections for transgender kids to the attempted Muslim ban that would have prevented LGBTQ refugees fleeing violence from settling in America, Mike Pence is the man behind the curtain pulling Donald Trump’s puppet strings.”

The vice president’s office didn’t respond to the Washington Blade’s request for comment on whether Pence’s views on LGBT issues have changed since he became vice president.