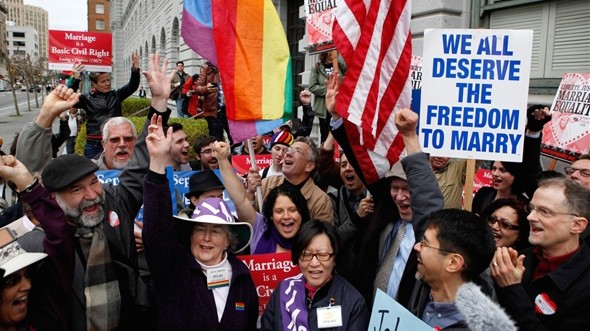 The court could also decide what level of judicial scrutiny must be applied to laws that seek to disadvantage LGBT people. At a time when some states are seeking to pass laws that enable people to discriminate by simply expressing a “religious” motivation, such a ruling could have far-reaching implications. And even beyond the law, a ruling that allowed discrimination against LGBT people under some circumstances or in some places could stall momentum that has been clearly building in favor of greater acceptance of LGBT people and their families.

To help readers prep for the April 28 argument and the crush of media reporting on the case, the following is a quick guide to the issues, the attorneys, and what to listen for:

When: Tuesday, April 28, from 10 a.m. EDT. The oral arguments are not broadcast, but there will be many television and radio news outlets reporting on the arguments as soon as they are completed at 12:30 p.m. An audio recording and transcript of the arguments will be available on the Supreme Court’s website by 2 p.m.

Issue in play: Whether states can discriminate against same-sex couples in the licensing and recognition of marriage.

Petitioners bringing the appeal: There are 28 plaintiffs (called “petitioners” when appealing to the Supreme Court) from four states. The Michigan case arose when a lesbian couple sought to adopt children together but were prevented from doing so because that state’s law allows only married persons to adopt children. The Ohio lawsuit involves 12 plaintiffs denied rights in three different circumstances: while seeking a death certificate that identified the deceased’s spouse, while seeking a birth certificate that listed both legal parents, and seeking recognition of marriage licenses obtained in other states. The Tennessee lawsuit was brought by three same-sex couples who married while living in other states, then moved to Tennessee. And the Kentucky lawsuit was filed on behalf of four same-sex couples married in other states who sought recognition from Kentucky.

States defending the bans: Kentucky, Michigan, Ohio, and Tennessee. They are among the 13 states that still enforce bans against same-sex marriage. But if the bans are upheld, another 10 states would likely re-start enforcement of bans that have been struck by other circuits.

For same-sex couple plaintiffs: Mary Bonauto, civil rights director of Gay & Lesbian Advocates & Defenders. Bonauto led the successful lawsuit that established the right to marry for same-sex couples in Massachusetts, the first state to issue marriage licenses to same-sex couples. This is her first time arguing before the Supreme Court. (She has 30 minutes)

For the United States: U.S. Solicitor General Donald Verrilli is expected to present the U.S.’s position against state bans on same-sex marriage. In 2013, Verrilli argued against the Defense of Marriage Act in U.S. v. Windsor and against California’s ban on same-sex marriage in Hollingsworth v. Perry. (15 minutes)

For same-sex couple plaintiffs: Douglas Hallward-Driermeier, partner at prominent conservative-leaning Ropes & Gray and head of its Supreme Court practice. He served as Assistant to Republican Solicitor General Paul Clement during the administration of President George W. Bush and handled Supreme Court litigation for the U.S. Department of Justice. Clement once worked for Atlanta-based King & Spalding and took the job in 2011 to defend the Defense of Marriage Act on behalf of the the Republicans in the U.S. House. After strong backlash from LGBT activists forcing gay-friendly King & Spalding to drop the case, Clement resigned from the law firm and went to work at a Washington, D.C., firm so he could defend DOMA.

An article in the Journal of Law for Atlanta-based Emory University School of Law said Hallward-Driemeier ranked 26th among the most frequent Supreme Court advocates between 2000 and 2012, having argued 13 cases. (30 minutes)

For states seeking to retain the bans: John Bursch, special assistant attorney general and former solicitor general of Michigan. Bursch did not argue the case before the Sixth Circuit. Michigan’s primary argument has been that the democratic process allows “the people get to decide what marriage is.” Bursch has argued eight cases before the Supreme Court and is fond of bow ties. (30 minutes)

History behind the appeal: In early June 2013, only 12 states had paved the way for same-sex couples to obtain marriage licenses. On June 26 of that year, the high court made that 13 by letting stand a Ninth Circuit ruling against California’s ban. It did not rule whether California’s ban was unconstitutional; it ruled only that the party who brought an appeal seeking to defend the ban did not have legal standing to do so. That prompted marriage equality supporters to file lawsuits in every other state that had a ban, with the aim of putting another case in front of the Supreme Court seeking a ruling on merits.

What are the stakes? The decision in this case has the potential to reach far beyond marriage in two ways. First, if equal protection applies to same-sex couples under marriage laws, then LGBT people could presumably rely on existing laws for equal protection in other arenas, including employment, public accommodations, and adoption.

And, second, in deciding this case, the court dictate what level of judicial scrutiny all courts must apply to laws that discriminate against people based on sexual orientation. The argument brief submitted by Verrilli and the Department of Justice urges the court to use “heightened scrutiny,” an intermediate level of judicial review that is easier to meet than “strict scrutiny,” but much more difficult to satisfy than mere “rational” review, which most courts use now.