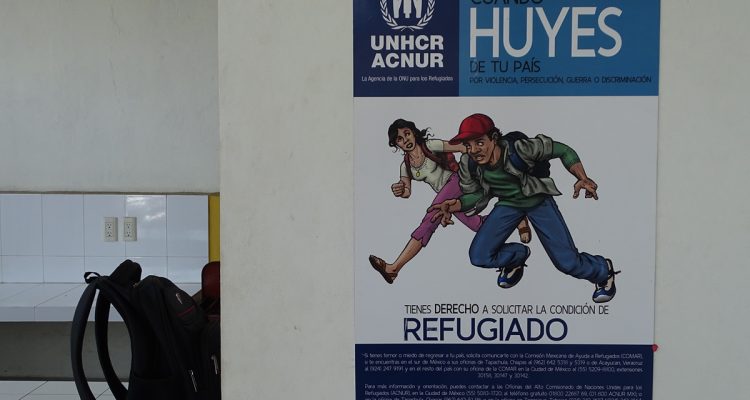 A flyer from the U.N. Refugee Agency in Ciudad Hidalgo, Mexico, on Jan. 29, 2019, advises migrants who are fleeing violence, persecution, war or discrimination have a right to apply for refugee status. Rainbow Railroad is participating in a new State Department program that will allow American citizens to help refugees resettle in the U.S. (Washington Blade photo by Michael K. Lavers)

Rainbow Railroad to Participate in New US Refugee Resettlement Program

A group that works with LGBTQ and intersex refugees and asylum seekers will participate in a State Department program that will allow American citizens to help refugees resettle in the U.S.

Secretary of State Antony Blinken on Thursday announced Welcome Corps, which a senior State Department official noted will allow Americans to “form private sponsor groups to support refugees and help them integrate into American society as thriving members of their local communities.” Another senior State Department official told reporters the program in its first year hopes to “mobilize at least” 10,000 Americans “to step forward as private sponsors and offer a welcoming hand to at least” 5,000 refugees.

Rainbow Railroad is among the organizations with which the State Department has partnered to help implement the program.

“We are excited to see the impact of this program, which will empower communities of care — LGBTQI+ Americans supporting LGBTQI+ refugees. This program will help at-risk LGBTQI+ people get to safety across the United States,” said Rainbow Railroad in a press release. “As an organization with extensive experience and expertise in private sponsorship, including in Canada, Rainbow Railroad was proud to be a consultative partner in the development of this new U.S. program, advocating for a model that will support LGBTQI+ persons at risk.”

“We are excited to be recognized as a private sponsorship organization by the U.S. consortium which is going to be operating this private sponsorship program,” added the organization. “This is an important moment for global LGBTQI+ rights and the advancement of refugee support in the United States, and we look forward to the opportunity to get more at-risk LGBTQI+ people to safety through this new program.”

Rainbow Railroad in 2022 helped resettle LGBTQ and intersex refugees from Afghanistan, Ukraine, Russia and more than 30 other countries. President Joe Biden in 2021 signed a memo that committed the U.S. to promoting LGBTQ and intersex rights abroad as part of his administration’s overall foreign policy.

The White House earlier this month announced the creation of a humanitarian parole program for Cubans, Haitians and Nicaraguans that officials said combines “safe, orderly and lawful pathways to the United States, including authorization to work.”

Cubans, Haitians and Nicaraguans through a U.S. Customs and Border Protection app “can seek advance authorization to travel to the United States and be considered, on a case-by-case basis, for a temporary grant of parole for up to two years, including employment authorization, provided that they: Pass righrous biometric and biographic national security and public safety screening and vetting; have a supporter in the United States who commits to providing financial and other support and complete vaccinations and other public health requirements.” The Biden administration also announced it will expand the use of “expedited removal” of Cubans, Nicaraguans, Haitians and Venezuelans who enter the U.S. from Mexico without legal authorization.

Immigration Equality and the Organization of Refuge, Asylum and Migration are among the myriad organizations that sharply criticized the White House over its expanded use of “expedited removal.”

The Biden administration has sought to end Title 42, a Centers for Disease Control and Prevention rule that closed the Southern border to most asylum seekers and migrants because of the pandemic, but Texas and more than a dozen other states filed a lawsuit. The U.S. Supreme Court last month ruled the Trump-era must remain in place. Oral arguments are expected to take place in the case next month.