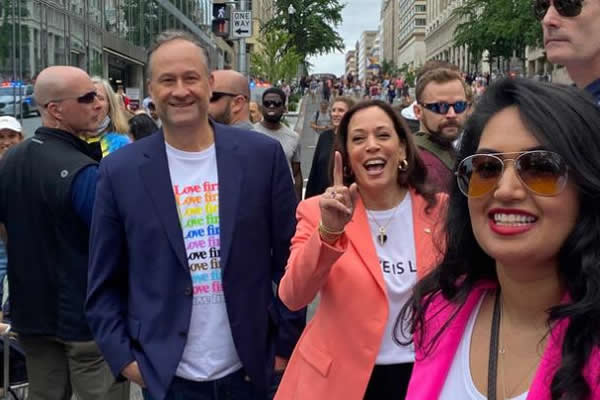 Although organizers are closely watching COVID-19 related developments in their states, at least 15 outdoor, in-person LGBTQ Pride events were scheduled to take place across the U.S. in the fall of 2021, according to the international LGBTQ group InterPride and online announcements by organizers of the Pride events.

The decision to move ahead with those events came shortly after Pride organizers in at least five cities announced they were cancelling their events for this fall due to concern over the COVID pandemic. Among them are Richmond, Va.; Annapolis, Md.; Atlanta; Louisville, Ky.; and San Francisco.

Organizers of a fall Pride event in Philadelphia also cancelled that event, originally set for Sept. 4. But the Philadelphia Gay News reports that the cancellation was not due to COVID but instead was due to objections by members of the community to the policies of the event’s organizers and a controversial public statement by one of the organizers considered by some to be derogatory to transgender people.

A statement announcing the cancellation of a San Francisco LGBTQ Pride Freedom Day Fest scheduled for Oct. 20 by its organizers appears to capture the sentiment of organizers of the other fall Pride events that were also cancelled.

“[W]e’ve determined that to produce a street fair with the safety and health of our communities at top priority, at the quality expected of SF Pride, is just not feasible this fall,” the statement says. “We are not cancelling – we’re merely postponing. Over the coming months, in addition to some new and returning fundraising events, we’re going to focus our energy on Pride 2022,” the statement continues.

“We remain as excited as we ever were to capture that spirit of wonder and look forward to bringing Freedom Day Fest to all of you in October 2022,” it says.

San Francisco Pride organizers noted that the fall Freedom Day Fest event was to be an addition to the city’s regularly scheduled Pride parade and festival that has taken place in June prior to the COVID outbreak but that were cancelled this year and last year.

The Richmond Pride event, known as Virginia Pridefest, was scheduled to take place Sept. 25. The event, which was also cancelled last year due to COVID, has attracted tens of thousands of participants in previous years.

“After consulting with our many corporate sponsors, organizational partners and volunteers we have decided it is in the best interest of the health and safety off our community to postpone VA Pridefest 2021,” organizers said in an Aug. 27 statement. “Our preparation puts us on solid footing as we postpone the festival to 2022 when we hope to hold it in June as part of the national observation of LGBTQ Pride Month,” the statement says. “This has long been a goal of ours, and this just may give us that opportunity,” it says.

Although organizers of Annapolis Pride cited COVID concerns as their reason for cancelling that event, which was scheduled for Oct. 30, activists in three smaller Maryland cities have chosen not to cancel their Pride events.

Like D.C.’s Capital Pride Alliance, Pride organizers in Baltimore cancelled their traditional June Pride parade and festival for the second year in a row and instead held more than a dozen smaller events in June of this year, both in-person and virtual.

In Los Angeles, Christopher Street West, the group that organizes that city’s Pride events, including its annual Pride Parade which in pre-COVID years has attracted hundreds of thousands of participants, also cancelled this year’s parade for the second year in a row. Like other cities, the group held several virtual Pride events in June.

Los Angeles Blade Publisher Troy Masters organized a Pride Walk in June that attracted a few hundred participants in an effort, Masters said, to hold at least one in-person event to celebrate Pride during the traditional Pride Month in June.

Capital Pride Alliance, which organizes D.C.’s annual Pride parade and street festival that have attracted over 200,000 participants in pre-COVID times, held a scaled back Pride Walk and Pride celebration at D.C.’s Freedom Plaza in June. The group has scheduled an Oct. 17 Pride Street Fair and Block Party on 15th Street, N.W. between P and Q Streets that it’s calling Colorful Fest.

On its website, Capital Pride says those entering the block party, which will be in a fenced in area where alcohol will be served, will be required to show proof of COVID vaccination.

“The Capital Pride Alliance is committed to finding opportunities for the LGBTQ+ community to gather together safely, especially as the fall and winter seasons will soon make it more difficult to hold outdoor events and pandemic guidelines will make indoor events challenging,” Capital Pride Executive Director Ryan Bos told the Blade. “To that end, we are working closely with the DC Government and following all current COVID-19 guidelines to have a safe outdoor event,” Bos said.

The Louisville, Ky., Pride, which had been scheduled for Sept. 18, is among the Pride events cancelled this fall due to COVID concerns, according to its organizers. But a second Pride event held in Louisville each year called Kentuckiana Pride, will take place as planned on Oct. 8-9 with a parade and festival.

Chad Eddings, the Kentuckiana Pride co-director, told the Blade the event would take place in an enclosed outdoor area and participants must show proof of vaccination or a recent negative COVID test as a requirement for admission. He said the event usually draws about 15,000 people.

InterPride, the LGBTQ organization that keeps track of Pride events “all over the world,” released the results of a survey it conducted of 201 worldwide Pride organizations to find out the type of Pride events they were planning for this year. The findings show that the largest number – 40.8 percent – reported they would be holding both in-person and virtual Pride events.

The findings show that 35.3 percent of the Pride organizations planned just in-person events this year; 19.9 percent planned only online or virtual events; and 4 percent either were not planning any events this year or had canceled their events.

The survey results released by InterPride did not breakdown the findings by specific countries.