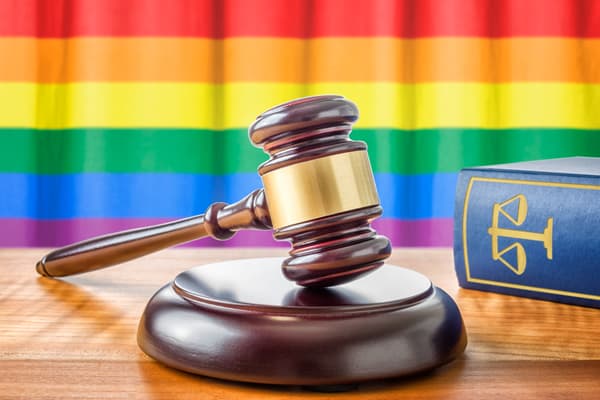 New rulings from federal appeals courts that have found an existing civil rights law against sex discrimination also prohibits anti-LGBTQ discrimination are shaking up the landscape for protections for LGBTQ people in the workplace.

The next week, the U.S. Sixth Circuit Court of Appeals determined Title VII bars anti-trans discrimination in the case against Harris Funeral Homes in Michigan. That decision also found the Religious Freedom Restoration Act doesn’t provide an exemption to employers seeking a religious exemption to discriminate against transgender workers. As a result of the ruling, the Sixth Circuit joins the First, Ninth and Eleventh Circuits in barring anti-trans workplace discrimination without dispute.

“Title VII provides strong protections against discrimination in the workplace,” Gruberg said. “If you are an employee in any one of those circuits that have already held that you’re protected, that gives you recourse. Also, there’s a lot of district courts that have also found Title VII prohibits discrimination based on gender identity and sexual orientation. So we’re seeing a lot more jurisdictions across the country agreeing with this definition.”

As a result of these court rulings, workplace protections for LGBTQ people have advanced in measurable ways. Federal law in the states of the Sixth Circuit — Michigan, Ohio, Kentucky and Tennessee — now unequivocally bar discrimination against transgender workers. Although each of the states in the Second Circuit — Vermont, Connecticut and New York — already has state a law barring anti-gay discrimination, the ruling enables lesbian, gay and bisexual workers to sue under federal law. That requires a lower threshold of evidence for a successful case than state law because it allows charges when the firings were the result of mixed motivations.

The number of circuit courts that have determined Title VII applies to LGBTQ workers may soon grow. The LGBTQ legal group Lambda Legal and the St. Louis-based law firm Mathis, Marifian & Richter LTD have brought before the U.S. Eighth Circuit Court of Appeals another lawsuit that could affirm protections in the jurisdiction for lesbian, gay and bisexual workers. The litigation was filed on behalf of Mark Horton, a health care sales specialist whose job offer at Midwest Geriatric Management was rescinded after the employer found out he’s gay.

Last week, 47 businesses, attorneys general from 15 states and D.C., the U.S. Equal Employment Opportunity Commission and major LGBTQ groups were among those that filed friend-of-the-court briefs before the Eighth Circuit urging the court to rule in favor of Horton and affirm Title VII protections for lesbian, gay and bisexual workers.

Omar Gonzalez-Pagan, staff attorney for Lambda Legal, said in a statement the briefs demonstrate “the nation’s top corporations recognize that discrimination is bad for business.”

“Our economy cannot thrive unless all people are welcome both as employees and customers,” Gonzalez-Pagan said. “Companies across all industries know that when an employee like Mark can bring their whole selves to work without fear of retaliation, they can focus on their jobs and succeed. Mark was recruited because of his recognized skills, which is what matters – and not his sexual orientation.”

But not every court is in alignment with the idea that Title VII protects LGBTQ workers. In a case filed by Jameka Evans, who alleged Georgia Regional Hospital fired her as a security guard for being a lesbian, the Eleventh Circuit Court of Appeals last year determined Title VII doesn’t apply to lesbian, gay and bisexual workers because Congress didn’t intend that when it passed the law in 1964. Other circuits have years-old precedent against protections for LGBTQ people under Title VII.

Moreover, the Trump administration has defied court rulings and reversed federal policy from the Obama years determining laws against sex discrimination apply to transgender people. On Title VII, U.S. Attorney General Jeff Sessions reversed a memo from former Attorney General Eric Holder assuring transgender workers protections. The Obama administration never explicitly took a position one way or the other on whether Title VII applies to lesbian, gay and bisexual workers, but the Trump administration sent a lawyer to the Second Circuit to argue against interpreting the law in favor of gay people in the Zarda case.

That view of sex discrimination under the Trump administration isn’t limited to Title VII. The Trump administration also rescinded guidance assuring transgender kids access to school restrooms consistent with their gender identity under the Title IX of the Education Amendments of 1972. The Justice Department also backed down from defending in court a rule assuring transgender people’s access to health care, including gender reassignment surgery, based on Section 1557 of Obamacare, which prohibits sex discrimination by medical providers.

Walter Olson, a senior fellow at the libertarian Cato Institute, said the idea Title VII applies to LGBTQ workers is “something of a stretch” based on the intent of Congress in 1964 as well as lawmakers’ inability since that time to pass an explicit law against anti-LGBTQ discrimination, such as the Employment Non-Discrimination Act.

“When this question first came up years ago, several circuit courts of appeals had rejected the idea that by banning sex discrimination Congress had also banned sexual orientation discrimination,” Olson said. “The cases back then were clear enough and consistent enough that lawyers regarded the issue as practically settled and so advised their clients. And law runs on precedent.”

Still, Olson conceded “there are also some pretty good arguments in favor of the effort” to interpret Title VII to apply to LGBTQ workers because “the law as interpreted by courts does change.”

“As we have seen in constitutional law, when narrow interpretations get broadened the world does not necessarily come to an end,” Olson said “And in the past couple of years there has been first a trickle and now a definite movement of federal courts toward a new position that ‘because of sex’ does cover sexual orientation after all. If that’s a stretch, then it’s the kind of stretch we’ve seen many times before, both in Title VII and elsewhere.”

As opposed to just leaving the issue to the judiciary, Gruberg said LGBTQ advocates should pressure Congress to enact an explicit prohibition on anti-LGBTQ discrimination because of the uncertainty of the courts and possible reversals from the federal government depending on which administration is in power.

“There’s still parts of the country where it’s an individual worker’s right and whether it’s their right to work free from discrimination because of their sexual orientation or gender identity will be upheld is not clear, and it’s really critical that Congress bring that clarity,” Gruberg said.

The likely vehicle for explicit legislative protections against anti-LGBTQ discrimination is the Equality Act, which would amend the Civil Rights Act of 1964 to prohibit anti-LGBTQ discrimination in employment, housing, public accommodations, credit, jury service, education and federal programs. The chief sponsor of the bill is Rep. David Cicilline (D-R.I.) in the U.S. House and Sen. Jeff Merkley (D-Ore.) in the U.S. Senate.

However, the bill is highly unlikely to move as long as Republicans retain control of Congress. In a 2000 interview with The Advocate, President Trump said he supports the idea of a bill that would add sexual orientation to the Civil Rights Act, but hasn’t addressed the issue since that time, nor whether he’d support adding protections for transgender people to the law. It seems unlikely he would support that now based on the record of his administration.

The U.S. Equal Employment Opportunity Commission, the agency charged with enforcing federal employment civil rights law, has determined in recent years Title VII applies to LGBTQ workers and decided to take up charges of anti-LGBTQ discrimination on behalf of workers. The commission found in 2012 Title VII applies to transgender workers in the case of Macy v. Holder and found in 2015 the law applies to lesbian, gay and bisexual workers in the case of Baldwin v. Foxx.

Even though the 11th Circuit in the Evans case has determined Title VII doesn’t apply to lesbian, gay and bisexual workers, the commission continues to interpret the law that way in that jurisdiction.

Christine Nazer, a spokesperson for the EEOC, affirmed the commission continues to apply the law in opposition to anti-gay discrimination in the 11th Circuit because the EEOC works as as independent agency.

“The agency’s position doesn’t change because of a circuit court decision,” Nazer said. “When we take charges of workplace discrimination (in this case, sexual orientation and gender identity charges) from the public, we apply Title VII/sex discrimination. In other words, our administrative process doesn’t charge; we determine the merit of the charge based on the law and EEOC policy.”

Gruberg said the EEOC has stood apart from other agencies in the Trump administration in continuing to uphold the idea laws against sex discrimination apply to transgender workers because of the nature of the commission.

“Even the conservative commissioners come from this kind of employment law background, and they have a very deep strong understanding of what Title VII entails and what the law says and what the non-discrimination protections includes and have been reviewing these cases and very familiar with it,” Gruberg said.

It’s hard to say when the U.S. Supreme Court will have an opportunity to decide the issue on a nationwide basis and affirm without a doubt Title VII protects either gay or transgender workers from discrimination. The high court declined to take up an opportunity last year to decide the issue in terms of anti-gay discrimination by declining a petition for certiorari in the 11th Circuit case filed by Jameka Evans against Georgia Regional Hospital.

There may be another opportunity if Altitude Express, the company that fired Zarda, filed a petition for certiorari over the Second Circuit. Although the business hasn’t announced one way or another what it will action, that action seems unlikely. An attorney for Attitude Express didn’t respond to a request to comment on whether a petition will be filed.

Another opportunity also may come after the Eighth Circuit decides against Horton, which may well be the case because the conservative court is stocked George W. Bush appointees. If Horton is the losing party, he could file a petition for certiorari before the Supreme Court.

Gruberg said the timing for when the Supreme Court will take up a case on whether gay protections are included under Title VII is “a very good question.”

“I think everyone feels that that’s coming,” Gruberg said. “It’s unclear what that case is going to be, though, so I think it’s probably a question that they’re going to take up soon, but what soon means in the court’s timeline is really unclear right now.”

The prospects are more daunting for a Supreme Court ruling asserting Title VII covers transgender people compared to anti-gay discrimination because the circuit courts have reached a greater consensus anti-trans discrimination is illegal. Transgender advocates are unable to seek review of wins before the Supreme Court because they have to take “yes” for an answer from the circuit courts.

However, a ruling from the Supreme Court for either gay or transgender people on Title VII, Gruberg said, would be significant not only for employment protections, but because it would have implications for other civil rights laws barring sex discrimination.