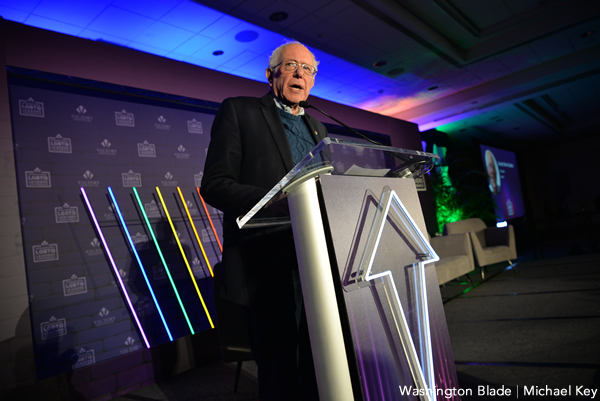 With the Democratic presidential primary coming down a two-man race, Sen. Bernie Sanders (I-Vt.) is urging voters to look at votes on LGBTQ rights in the 1990s when was on different sides with former Vice President Joseph Biden, including “Don’t Ask, Don’t Tell” and the Defense of Marriage Act.

“When you’re a politician, sometimes you have to cast very difficult votes,” Sanders said Friday during a news conference in Phoenix. “And you understand that after you cast that vote, you going to have all kinds of phone calls coming into your office that had to do with the Defense of Marriage Act. That was not a popular vote.”

“So, the point here is not just to look back 20 years, but look back at consistency,” Sanders continued. “It is to look at what candidate cast difficult votes because they were the right votes, even though one knew they would be unpopular. That is the issue.”

Sanders counted among these votes not just LGBTQ issues like “Don’t Ask, Don’t Tell” and DOMA, but voting to authorize former President George W. Bush to go to war in Iraq.

“We’re living in a moment, God knows, where there it’s a very difficult moment, we all know that,” Sanders said. “And all I can tell you, whether it was Iraq, whether it was DOMA, whether it was ‘Don’t Ask, Don’t Tell.’ Those were difficult votes. I was there on the right side of history and my friend, Joe Biden, was not.”

These remarks come after Biden had a remarkable comeback on Super Tuesday, disrupting the media narrative that Sanders’ claim to the Democratic nomination was all but inevitable. The Vermont Independent also makes the remarks the day after Biden unveiled a comprehensive LGBTQ rights plan that draws on the achievements of the Obama administration when he was vice president.

Sanders isn’t wrong about the votes. When Republicans controlled Congress in 1996, they brought up DOMA, which prohibited federal recognition of same-sex marriage, to stymie Democrats and President Clinton as he sought re-election. Biden as a U.S. senator from Delaware voted for DOMA, but Sanders, bucking opinion against same-sex marriage, was in a minority of House members who voted against the measure.

But greater scrutiny at those votes indicate the differences weren’t as clean-cut as Sanders would like. With regards to DOMA, Sanders at the time signaled his vote wasn’t about LGBTQ rights, but the U.S. Constitution.

A Time Magazine piece from 2016 on Sanders vote against DOMA found a 1996 quote from Jane Sanders, then her husband’s chief of staff, suggesting the issue was about states’ rights, not LGBTQ rights.

“We’re not legislating values. We have to follow the Constitution,” Jane Sanders was quoted as saying. “And anything that weakens the Constitution should be (addressed) by a constitutional amendment, not a law passed by Congress.”

As far as “Don’t Ask, Don’t Tell,” as Biden campaign spokesperson Jamal Brown pointed out on Twitter, Biden was on the record at the time in favor of allowing openly gay people to serve in the U.S. military. Further, he voted for an amendment that sought to remove that language from the defense bill, which ultimately failed, before ultimately voting for the legislation as a whole.

“I have no doubt there are homosexuals who serve in the military and that this won’t have a major impact,” Biden was quoted as saying in the article.

At the CNN town hall last year on LGBTQ issues, Biden justified his vote by saying he supported an amendment to remove “Don’t Ask, Don’t Tell” from the defense bill, even though gay former Rep. Barney Frank backed the plan as an improvement over the military’s administrative ban.

“I voted against it as part of the bill, OK?” Biden said. “And it was introduced by a guy who was trying to do something good. Introduced by a gay man in the United States senate, Barney Frank. And he was trying to figure out how to at least get by the issue of not having to do something and be automatically excluded. I didn’t think it was a good idea, so I voted no. But then it became part of an entire defense appropriation bill that was a gigantic bill, and I voted for the bill.”

Sanders also doesn’t capture Biden’s voting record. In 1992, Biden voted against an amendment that would have prohibited D.C. from offering domestic partnerships to same-sex couples. In next decade, when a Federal Marriage Amendment came before Congress in 2004 and 2006 that would made a ban on same-sex marriage part of the U.S. Constitution, Biden voted against the measure.

Those comments also completely ignore the seismic change on LGBTQ rights during the Obama administration, when Biden was vice president and was many times ahead of the curve. Biden famously came out for same-sex marriage in 2012 on “Meet the Press,” which former President Obama’s own endorsement and helped make the idea mainstream.

Rufus Gifford, a Biden supporter and one of seven openly gay U.S. ambassadors who served in the Obama administration, told the Washington Blade criticism from Sanders on LGBTQ rights amounted to “a politically opportunistic attack.”

“I’d put Joe Biden’s…leadership on all things LGBT up against any other candidate,” Gifford said. “I know the man. I know where his heart is…Not only did he come out in favor of marriage equality before a lot of other Democrats did, including Barack Obama, but it was more than that. It was how he represented himself as a Vice President by going as far as marrying same-sex couples, staffers of his.”

Gifford added criticizing Biden on LGBTQ votes from the 1990s “just rings hollow to me” and other LGBTQ people share that view.

“He’s put his money where his mouth is, not just with legislation but also with actual real actions and taking care of the people around him,” Gifford said.

Asked if Sanders’ assertion Biden cast those votes in the 1990s were untrue, Gifford replied, “It’s not that it’s not true. The facts are the facts.”

“But when you look at someone’s record,” Gifford continued, “and when you look at the breadth of what they have done, and the advocates they have been, especially over the course of the Obama administration, I think it’s impossible to paint a picture of Joe Biden that is not 100 percent an advocate.”

The timing for next contests in the Democratic primary contests is Tuesday. States where Democrats will go to the polls are Idaho, Michigan, Mississippi, Missouri, North Dakota and Washington State.