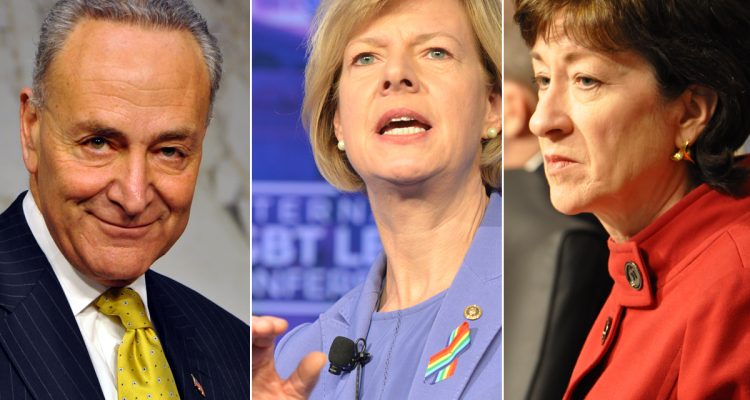 Senate May Cue Up Marriage Vote Soon, But 60 Notes Not Assured

Legislation seeking to codify same-sex marriage may be cued up as soon as this week in the U.S. Senate after lawmakers returned from August recess, although reaching the 60-vote threshold to end a filibuster is unassured.

Senate Majority Leader Charles Schumer (D-N.Y.) took to the Senate floor on Wednesday to make the case for the Respect for Marriage Act, which he said was needed in the aftermath of the U.S. Supreme Court’s decision overturning Roe v. Wade.

“Over the past few months, both sides have engaged in good-faith conversations about how to pass marriage equality into law,” Schumer said. “I truly hope – for the sake of tens of millions of Americans — that there will be at least ten Republicans who will vote with us to pass this important bill soon. Democrats are ready to make it happen — and willing to debate reasonable compromises on the specifics — so I urge my colleagues on the other side to join us.”

The likeliest scenario, as of Wednesday, was for Senate Democrats to start the procedural process Thursday to set up for votes on the Respect for Marriage Act early next week, two Democratic aides familiar with the bill told the Blade.

Sen. Tammy Baldwin (D-Wis.), the only open lesbian in the Senate, has been a proponent of the legislation and would be a likely candidate to go to the floor to seek a vote on the legislation.

Whether or not there are 60 votes in the Senate to end a filibuster is another matter. Supporters of the legislation have been bullish about obtaining 10 Republican votes to aid the united Democratic caucus in cutting off debate to move forward with the bill, but only four Republicans have signaled support in some capacity: Susan Collins (Maine), Rob Portman (Ohio), Thom Tillis (N.C.) and Ron Johnson (Wis).

“As for vote count, still the same,” one Senate Democratic aide told the Blade on Wednesday. “We don’t have 10 firm commitments from Republicans, but we are close and believe that the votes are there without the firm commitments.”

Johnson also has indicated his support would be conditional upon the inclusion of language to accommodate objections to same-sex marriage on religious grounds. Language being drafted by Baldwin and Collins for such an amendment, Democratic aides familiar with the bill told the Blade, would affirm the 1993 Religious Freedom Restoration Act, but go no further.

A competing amendment on religious exemptions, however, is expected to come from Sen. Mike Lee (R-Utah), according to a report in Politico. His office didn’t immediately respond Wednesday to the Blade’s request to comment on the nature of the amendment or the support obtained for the measure.

Concerns that there aren’t enough votes to advance the Respect for Marriage Act were piqued last week in the aftermath of an article in Politico with the headline: “Same-sex marriage bill teeters on verge of GOP filibuster.” The article points out numerous Republicans who are possible “yes” votes, such as Sens. Mitt Romney (R-Utah), Pat Toomey (R-Pa.) and Lisa Murkowksi (R-Alaska), have yet to declare outright support for the legislation.

Murkowski, who was an early Republican supporter of same-sex marriage, stands out in the group as among the Republicans who have yet to declare a position on the Respect for Marriage Act, although a spokesperson for the Alaska Republican confirmed to the Blade she remains undecided.

“Sen. Murkowski has long supported marriage equality,” said Hannah Ray, a Murkowksi spokesperson. “She is reviewing the House-passed bill and tracking negotiations in the Senate over possible modifications to the text of the Respect for Marriage Act introduced by Sens. Baldwin and Collins, so at this time she has not announced how she will vote.”

The conclusion of the Politico article that sufficient support remains in question, however, appears largely based on quotes from senior Republicans in the Senate who reportedly cast doubt about whether enough members of their caucus would break away to support the bill. Senate Minority Whip John Thune (R-S.D.) was quoted as saying right now no one knows “the exact answer” on the number of votes; he reportedly added he hasn’t done a formal whip count.

Sen. John Cornyn (R-Texas) was reportedly more blunt in his assessment: “I don’t see 10 Republicans,” Cornyn was quoted as saying. “I assume if people were inclined to support it, they would have already declared in support of it.”

Blade readers will remember Cornyn was the member of the Senate Judiciary Committee who pressed now U.S. Associate Justice Ketanji Brown Jackson during her confirmation hearing about the U.S. Supreme Court’s 2015 decision in favor of same-sex marriage, asking her whether she could understand observers being surprised by the outcome.

Despite Cornyn’s projections, Republicans in the Senate have had a history of keeping their cards close to their vests on measures relating to LGBTQ rights before some ultimately break away to vote in the favor of the legislation. Such has been the case in the past 12 years with “Don’t Ask, Don’t Tell” repeal and the Employment Non-Discrimination Act.

Bolstering the prospects for the Respect for Marriage Act is that the bill would reaffirm existing law as opposed to make changes. The legislation also wouldn’t codify same-sex marriage into the U.S. code, but rather repeal from the books the Defense of Marriage Act, which the Supreme Court struck down in 2013, and require states to recognize same-sex marriages performed elsewhere.

A final push for the legislation among its supporters was evident in recent days as expectations for a vote increased. The Human Rights Campaign was set on Thursday to deliver to the Pittsburgh office of the undecided Toomney letters urging him to support the Respect for Marriage Act

Within the Republican Party, more than 400 prominent Republicans signed a letter organized by the LGBTQ group Freedom for All Americans and issued on Tuesday urging support for the Respect for Marriage Act. Among the co-signers are former Republican National Committee chair Ken Mehlman, who’s gay; Mehmet Oz, the Republican Senate nominee in Pennsylvania; and former president George W. Bush’s daughter Barbara Bush.

“As Republicans and conservatives, we believe strong families and lasting relationships strengthen communities, and civil marriage is a fundamental freedom central to individual liberty and the pursuit of happiness,” the letter says. “We stand with the 71 percent of Americans today, including a majority of registered Republicans, who support the freedom to marry for all Americans.”

Baldwin, for her part, said in a statement to the Blade on Wednesday she continues to remain optimistic about reaching the necessary 60 votes on the Respect for Marriage Act and work continues behind the scenes on those efforts.

“I am continuing my work to build the Republican support needed to pass our bipartisan legislation to protect marriage equality and ensure Americans in same-sex and interracial marriages are guaranteed the same rights and freedoms of every other marriage,” Baldwin said. “These loving couples deserve this certainty and the American people overwhelmingly agree.”