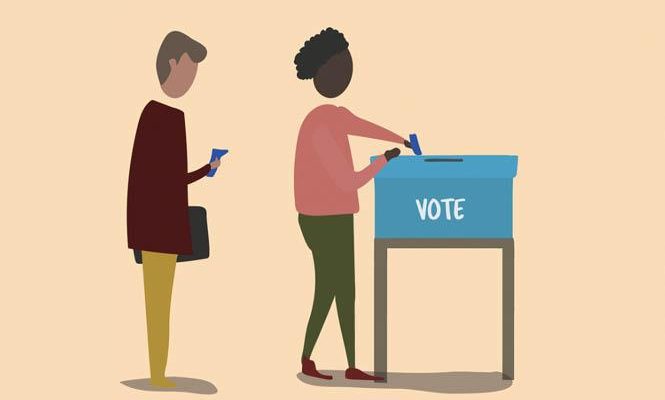 The battle over voting rights in the United States has been a long and contentious one, with proponents of tighter regulations — typically Republicans — arguing that increasing identification requirements helps to ensure more secure, fraud-free elections.

The arguments in favor of those regulations generally look like this: allowing people to cast their ballots without a state-issued photo ID, such as a driver’s license or, in the case of Texas, a concealed gun carry permit, means that anyone can vote in someone else’s name, therefore undermining the security of elections in general. It’s an argument that’s gained even greater traction among Donald Trump supporters since the former president lost the 2020 election but falsely continues to insist the election was stolen from him.

Since that acrimonious presidential election, reported Reuters, various states have put in place more than 30 laws restricting access to voting, ranging from tighter voter ID laws to laws further limiting access to mail-in ballots. These efforts have led to greater disagreements between Democrats, who typically favor easier access to the ballot for voters, and Republicans, who continue to push a narrative of widespread voter fraud though there isn’t evidence to support those claims. Even Trump’s former attorney general, William Barr, declared this summer in an interview with the Associated Press that the Justice Department found no evidence of widespread voter fraud that could change the outcome of the 2020 election.

Democrats argue that tighter restrictions are really just an effort to restrict those who go to the polls and that more stringent ID laws are targeted at voters who traditionally vote Democratic: people of color who are less likely, for a number of reasons, to even have a photo ID.

Another group, however, finds itself affected by these restrictions as well, despite its dramatically lower numbers. Transgender Americans, of whom an estimated 878,300 will be eligible to vote in this November’s election, face enormous struggles to gain access to state-issued photo identification in many states, according to LGBTQ advocates.

“Forty-two states conduct their elections primarily in person at polling places, as opposed to fully by mail,” states a report by the Williams Institute, an LGBTQ think tank based at UCLA School of Law. Further, more than “697,800 voting-eligible transgender Americans live in these states. An estimated 43% of these individuals (296,700) lack identity documents that correctly reflect their name or gender.”

The report, titled “The Potential Impact of Voter Identification Laws on Transgender Voters in the 2022 General Election,” was issued earlier this month.

And, while many of those transgender voters might actually have photo ID, what they don’t have is photo ID that accurately reflects their correct gender identity. In a great many of those cases, obtaining that ID is a huge challenge, particularly as the states in which they live make it harder for them to get that ID.

“These eligible voters could face substantial barriers and potential disenfranchisement in the November 2022 general election,” the report states.

Fixing that problem is no easy task.

“Recently there have been some changes to those policies and they have definitely been made with trans people in mind,” Kathryn O’Neill, lead author of the study, told the Bay Area Reporter. “In places like California, there are positive changes. But there are some states that have made it fully impossible to change your gender on birth certificates.”

California which, along with Colorado, Hawaii, Nevada, Oregon, Utah, Vermont, and Washington, allow all elections to be conducted by mail, according to the National Conference of State Legislatures. These are states that automatically mail ballots to their citizenry and allow them to be returned via post. Other states allow voting-by-mail but with various restrictions.

However, around 414,000 voting-eligible transgender Americans reside in the 31 states that both primarily conduct their elections in person at the polls, and have a voter ID law, according to O’Neill’s report. “Nearly half of these, or 203,700 individuals, do not have an ID that correctly reflects their name and/or gender,” the report states.

Almost 65,000 of those voting-eligible trans individuals live in states with the country’s strictest voter ID regulations, and those people could find themselves up against serious “barriers and potential disenfranchisement in the November 2022 general election,” the report states.

Trying to rectify that problem is, for those potential voters, an enormous challenge in itself.

“Transgender voters face the unique added burden of needing to update their IDs with their correct name, photo, and gender marker once they begin to live in accordance with their gender identity,” according to the report. “This administrative burden can be challenging and costly, with laws that vary significantly across different states and federal agencies.”

Numerous states don’t permit gender marker changes on birth certificates while others require proof of gender-affirming surgery or a court order. Furthermore, meeting all the requirements to update their identification can be costly. For a population “more likely to report living at or near poverty than the U.S. general population,” according to the report, the costs of court orders, obtaining letters from doctors, and simply the costs of IDs themselves, these requirements are beyond their economic means.

But those aren’t the only challenges transgender voters in those states face. Interestingly, even those who support easier access to polls also support requirements for photo IDs at the polls.

According to a Monmouth University poll published in June 2021, 71% of the public believes voting at the polls should be made easier. However, 80% of people polled also support requiring voters to show ID when they go to cast their ballot. Equally notable is that 50% of those polled consider voter disenfranchisement a greater problem than voter fraud; just 37% saw the reverse as the bigger issue. The poll surveyed 810 adults and has a margin of error of +/- 3.5 percentage points.

“More than two in three Americans (69%) support establishing national guidelines to allow vote-by-mail and in-person early voting in federal elections in every state,” the report continued. “Just 25% oppose this idea. Support for establishing national voting guidelines on these issues comes from 92% of Democrats, 63% of independents, and 51% of Republicans.”

Voting by mail, of course, generally alleviates many of the issues that come up with voting in person at the polls.

“A lot of where problems arise is from interactions with a poll worker,” said O’Neill. That, coupled with the fact that as many as 46% of transgender people in the U.S. report having no ID with their correct name and gender, place trans voters at a tremendous disadvantage. The burden for determining whether someone meets requirements to vote typically falls on poll workers.

Even in states with default mail-voting, such as California, or no ID requirements at the polls, problems can arise.

In those states, noted the report, trans voters “would tell poll workers their names as reflected on their voter registration to receive a ballot. Poll workers or election officials could question a person’s eligibility to vote if they do not believe that the name on the voter rolls matches the voter, such as when a name is traditionally masculine or feminine and the voter appears to not match that gender. Prior research has found that as many as one in 10 voters in states without voter ID laws have been asked by poll workers for identification. An estimated 33% of all voting-eligible transgender people in these states do not have identification that lists their correct name.”

One of the ways around this is the institution of a coordinated, national voting policy, with the same voting requirement for voters in all 50 states. Barring that, revising voter ID laws in states with heavier restrictions to allow for more access to the polls among traditionally disenfranchised populations is another possibility. Making it easier for transgender people to obtain ID that properly reflects their gender identity, too, would make a huge difference, the report concluded.

One of the steps California has taken, beginning in 2019, was to begin training poll workers how to help trans voters secure their voting rights at the polls, the report noted.

For now, much of the onus remains with trans voters themselves. To ensure their right to vote, and to have access to the polls, particularly in states with restrictive ID laws, transgender voters have to do the legwork.

“The first thing to do is start early and get an ID,” said O’Neill. “Those processes take a long time. You also want to look up your state’s policies. If you don’t have an ID they want, you’re out of luck.”