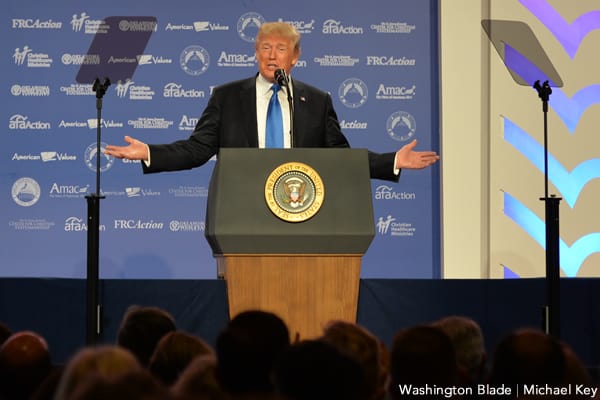 President Trump is touting the Republican tax reform plan as his first legislative win as Congress sends the legislation to his desk, but LGBT rights supporters are warning about expected negative impacts of the measure — especially the end to the individual mandate in Obamacare.

In a statement Wednesday after final congressional approval of the bill, Trump said he made good on his promise for “a big, beautiful tax cut for Christmas.”

“Unemployment continues to fall, the stock market is at a record high, and wages will soon be on the rise,” Trump said. “By cutting taxes and reforming the broken system, we are now pouring rocket fuel into the engine of our economy. America is back to winning again, and we’re growing like never before. There is a great spirit of optimism sweeping across our land. Americans can once again rest assured that our brightest days are still to come.”

That optimism wasn’t shared by LGBT rights supporters, advocates against HIV/AIDS and deficit hawks who say the projected 0.8 percent growth expected as a result of the bill isn’t enough to pay for its costs.

Laura Durso, vice president of LGBT research and communications for the Center for American Progress, said the package “will have massively negative implications for LGBTQ people” especially as a result of ending the individual mandate for health care.

“Eliminating the individual mandate means that insurance premiums will go up, putting coverage out of reach for those with lower incomes,” Durso said. “LGB people are also less likely to have coverage through their spouse or partner, compared to non-LGB people, and so the stability of the individual market is incredibly important for our community.”

According to the Congressional Budget Office, repeal of the individual mandate in Obamacare would result in a decrease of the number of people with health insurance by 4 million in 2019 and 13 million in 2027. Additionally, CBO predicts average premiums in the non-group health insurance exchanges would rise by about 10 percent in most years of the upcoming decade.

Doug Wirth, CEO of the New York-based health care non-profit Amida Care, said people with HIV/AIDS would be among those to face consequences as a result of the tax package.

“The tax reform bill is just another way to strip away health care access from millions of Americans in order to cut taxes for the wealthy,” Wirth said. “Paying for this massive transfer of funds by cutting safety net programs will hurt those most in need, like the 74 million hard-working Americans, including veterans, women, seniors, and people with chronic conditions like HIV and diabetes, who count on Medicaid for health insurance. We are deeply troubled by the repeal of the individual mandate, which will lead to sky-high premiums.”

Wirth said components of the bill that decrease deductions for medical expenses and remove tax exemptions helping hospitals and nonprofit organization would have a negative impact — but eliminating the individual mandate in the Affordable Care Act would be particularly bad.

“By ensuring that healthy people join the insurance pool, the mandate is essential to keeping health care affordable for everyone, and particularly those who depend on insurance the most, such as people with chronic medical conditions or serious illnesses,” Wirth said. “Without the mandate, health care premiums will skyrocket and an estimated 13 million people will lose coverage.”

The estimated price tag for these tax reductions varies from analyst to analyst, and each of the analysts has differing takes depending on the economic growth as result of tax cuts in the legislation. The Committee for a Responsible Federal Budget has projected the package would add $1.5 trillion to the deficit over the course of 10 years, or as much as $2.2 trillion. As a result, the national debt — which is now $20.6 trillion — would double by 2027.

David Stacy, government affairs director for the Human Rights Campaign, predicted in a statement federal programs assisting LGBT people would face cuts in the future to pay the cost of the tax legislation.

“If the Trump-Pence tax scam becomes law, programs crucial to the LGBTQ community like Medicare, Medicaid, global HIV & AIDS programs, and the Ryan White Care Act will surely face future efforts to cut their benefits,” Stacy said. “This is a reckless and desperate attempt to score a legislative victory at the expense of everyday Americans.”

The tax reform package also lowers the corporate tax rate from 35 percent to 21 percent, doubles the standard deduction for individuals and families, doubles the child tax-credit and increases the threshold for payments under the estate tax from $5.5 million to $11.2 million.

In contrast to the change to the corporate tax, which is permanent, the tax cuts for individuals and families will expire in 2025 if Congress doesn’t act to reauthorize them.

Conservative groups — regardless of their position on LGBT rights — said those cuts were positive aspects of the legislation that outweigh any negative consequences.

Gregory Angelo, president of Log Cabin Republicans, said components of the tax reform plan that eliminate the estate tax and the individual mandate in Obamacare “are obviously welcome news.”

“Not a single person will lose healthcare as a result of this legislation; people are simply not coerced by the government to buy a product they don’t want without fear of paying a mandatory penalty,” Angelo said. “And the pernicious tax that gave Edith Windsor standing in court to overturn the Defense of Marriage Act has now been severely curtailed. That’s most definitely a good thing.”

Ralph Reed, chair of the anti-LGBT Faith & Freedom Coalition, said in a statement the tax reform package “is pro-child, pro-jobs, pro-middle-class, and pro-family.”

“The Tax Cuts and Jobs Act doubles the child tax credit to $2,000 per child, doubles the standard deduction for individuals and married couples, and repeals the repressive Obamacare mandate to begin full dismantling of Obamacare,” Reed said. “President Trump and Congressional Republicans have now delivered for the American people a simpler and fairer tax code that protects and supports families and children, and will increase wages, promote job creation, and make American businesses more competitive.”

The tax reform package also curtails the amount taxpayers can deduct for state and local income tax, sales tax, and property taxes to $10,000. The deduction would have been eliminated entirely if not for an amendment inserted by Rep. Susan Collins (R-Maine).

The cap of that deduction explains why many “blue” state Republicans in the U.S. House, including those in California, New Jersey and New York, were among the 12 Republicans who voted against the bill. With high state taxes and property values in those states, people living there may face a tax increase, not decrease, as a result of tax reform.

Rep. Sean Patrick Maloney (D-N.Y.), who’s gay and a co-chair of the LGBT Equality Caucus, cited the issue of the property tax in a statement explaining his “no” vote on the bill.

“Most of the Republicans from New York broke with their own party and voted no, so I couldn’t possibly support it,” Maloney said. “I mean, it raises property taxes for us and 83 percent of the benefits go to the richest 1 percent, so it obviously won’t help the Hudson Valley families who need relief. But it will explode our deficit, weaken Medicare, and undermine our efforts to build infrastructure and invest in education.”

Durso also cited the reduced deduction on state and property taxes as an LGBT issue on the basis that “if an LGBTQ person decided to live in places that have stronger non-discrimination protections, typically more progressive states and cities, they will now be penalized for living in a safer community.”

The White House hasn’t yet announced when Trump will sign the bill, although he’ll certainly pen his name to the legislation. Trump made tax reform a legislative priority and most observers say he needs a win to bolster his standing among the GOP base.

Durso said the ultimate cost of the tax reform package won’t be realized until the long-term when the effects are seen.

“Lower income families, including LGBTQ people who are more vulnerable to poverty than their peers, will see only modest gains in the near future but many will see their taxes actually rise by 2027,” Durso said. “Even worse, this bill will trigger automatic spending cuts and members of Congress have already stated their intention to eviscerate programs like Medicare, Medicaid, and Social Security that LGBTQ people rely on for the security of their families. This bill will harm millions of people and the LGBTQ community will undoubtedly feel the pain that President Trump and congressional Republicans have caused.”