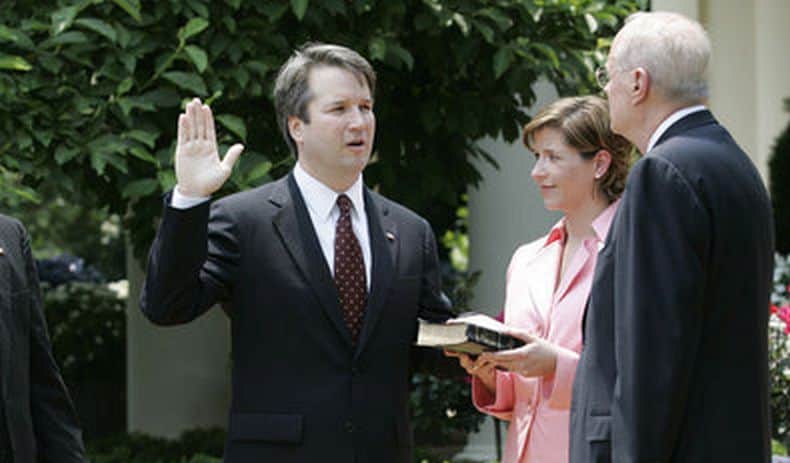 Swearing-in Ceremony for Brett Kavanaugh to the U.S. Court of Appeals for the District of Columbia. Oval. Rose Garden.

Kavanaugh first rose to national notice as the author of the infamous Starr Report during the Clinton Impeachment trial in the late Nineties.

In more recent years, Kavanaugh has served as judge on the District of Columbia appeals court. He has held the position since 2006. He also worked as an advisor to former President George W. Bush.

Kavanaugh’s appointment would be personally convenient for the current President.

According to the BBC, Kavanaugh “wrote a Minnesota law review article in 2009 arguing that presidents should be shielded from criminal investigations and civil lawsuits while in office.”

The nomination fight is expected to be a brutal, no-holds-barred political contest. It would be Trump’s second appointment to the high court; Kavanaugh would theoretically fill the chair of departing Justice Anthony Kennedy.

Kennedy was regarded by some as a centrist and a “swing vote” on SCOTUS. His leave-taking opens the door to a possible long-lasting conservative realignment on the highest court in the nation.

Kavanaugh, 53, is a longtime stalwart of the conservative legal movement, and a darling of the right-wing Federalist Society.

During the nomination, Trump called the judge a brilliant jurist. He added: “Judge Kavanaugh has impeccable credentials, unsurpassed qualifications and a proven commitment to equal justice under the law.”

If the nomination passes through the Republican-controlled Congress successfully, the Kavanaugh appointment could affect the orientation of legal discourse for a generation.

With a conservative majority safely assured, the Court might seek to rule on any number of important issues, including gay marriage, reproductive rights, economic justice, and criminal justice issues.

The end results of SCOTUS alignments are notoriously difficult to foresee, scholars have warned.

Kavanaugh is married, with children. He attended Yale University, and is a practicing Catholic.