Uncovering the ‘B’ in LGBT: Bisexuals say invisibility leads to many social, health disparities

When President Barack Obama uttered those three words at this year’s State of the Union address—lesbian, bisexual, and transgender—it was another milestone for LBT activists across the nation fighting for visibility in a minority world still dominated heavily by white gay men.

“…That’s why we defend free speech, and advocate for political prisoners, and condemn the persecution of women, or religious minorities, or people who are lesbian, gay, bisexual or transgender. We do these things not only because they’re right, but because they make us safer,” Obama said in his Jan. 20 speech.

Never before had the words “lesbian,” “bisexual” or “transgender” crossed the lips of a president giving a speech watched by so many across the nation.

“The president mentioning bisexuals in the State of the Union, it was great, a milestone. I know many bisexual activists and organizers were talking about it in the days after it happened,” says Dr. Sharif Williams, better known as Dr. Herukhuti. “It’s a milestone in the ongoing work that we have been doing.”

Dr. Herukhuti is a 2015 Thought Leader for the Association of Black Sexologists and Clinicians and is well known for his work in bisexual activism. In 2013, he was part of the first-ever White House public policy roundtable on bisexual community issues that was co-organized by BiNet USA.

“One of the things we deal with is the ways in which bisexuals are rendered invisible by gays and lesbians, i.e., bisexual invisibility,” Dr. Herukhuti tells GA Voice.

“This means we are an absent presence and a present absence in the LGBT community and in organizations and services.”

For example, bisexuals face many disparities in health care, even more so than lesbians and gay men, he explains.

For the past five years he and organizations such as BiNet USA have worked with the Obama administration to ensure data is collected specifically on bisexual people.

Initiatives and projects focusing on LGBT people typically include bisexual and often transgender people as just “add-ons,” Dr. Herukhuti says, and so the focus and programming are really then designated only for gay men and lesbian women.

“That means those organizations are being funded to serve us but really aren’t,” he says. “This experience of being invisibilized and biphobia has contributed to significant disparities and challenges bisexuals endure that are not being adequately addressed by mainstream LGBT organizations and leaders.”

This month, a UK study published in the Journal of Public Health shows bisexual women were:

For bisexual men, the data show similar results, Dr. Herukhuti explains. “We [as bisexuals] are stereotyped as privileged groups of people, all white, wealthy, accessing hetero privilege; these are a number of fallacies,” he says.

In fact, certain studies show that those at least 40 percent of people who identify as bisexuals are people of color, poor or working class, and deal with higher cancer rates, are more likely to smoke, and endure higher incidents of domestic violence, he says.

Also, placing bisexual men into the same category as gay men when researching HIV/AIDS treatment and prevention methods continues the stigma faced by those who are bisexual.

‘I wish people would understand bisexuality is not a phase’

“Bisexuality is not a phase and does not invite an easier way to live than a gay or lesbian person,” says Veronica Sidwell of Atlanta, a transgender bisexual woman.

“I wish people understood that bisexuality is not a phase. Bisexuals are not people who haven’t come to terms with being gay, nor are they people who are going through a cutesy experimental phase,” she says. “We’re also not necessarily promiscuous.”

Raised in Macon, Georgia, Sidwell says she acknowledged her bisexuality as a teen while living in a fairly conservative city.

“I understood it much earlier, but I didn’t come to terms with it until then,” she says. And while she comes from a religious and conservative family, she says they have been supportive of her.

The main issue Sidwell says she faces as an openly bisexual person is the common assumption that she must want to be in a polyamorous relationship.

“Perhaps there is some assumption that if someone is bisexual, they just can’t live without having regular sexual relations with both sexes, and therefore they’d be a perfect candidate for an open relationship. This may be true for some people, but it’s certainly not true in my case,” she says.

“Like every other issue in life, it’s best to just leave your assumptions at the front door,” she adds. 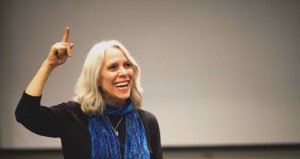 For Robyn Ochs of Boston, a national bisexual activist and editor of Bi Woman Quarterly, “coming out” as bi when she was young presented its own challenges.

“I came out pre-internet, during the dark ages, in an environment filled with silence and a tremendous amount of shame,” she says.

Ochs is editor of “Getting Bi: Voices of Bisexuals Around the World” and the co-editor, with Dr. Herukhuti, of the new anthology “RECOGNIZE: The Voices of Bisexual Men.” Her writings have been published in numerous bi, women’s studies, multicultural, and LGBT anthologies.

She kept her identity secret for five years, fearful that if she told anyone she would be rejected. Then one day a work colleague opened up to her to say she was bisexual. Ochs said she nearly exploded, saying, “So am I!”

“I felt so relieved. I felt I had been carrying this weight that had been partially lifted,” she says.

On May 17, 2004, Ochs married her partner, Peg, in Massachusetts, becoming one of the first couples married when same-sex marriage became legal. However, she and her wife were identified as a lesbian couple in the photo caption—rather than a same-sex, or same-gender, couple.

“One of the things that happens for bisexuals is that we are too often overlooked. When someone doesn’t know me and meets me with my wife, they read us as a lesbian couple. When people see a mixed-gender couple they see heterosexuals. Bisexuals are rarely seen as bisexual,” she says.

How does Ochs define bisexuality?

It is important to advocate on behalf of bisexuals and their specific needs, Dr. Herukhuti stresses.

“The data suggests bisexuals are in an ongoing process of identity maintenance, which is different than gays and lesbians. We can be secure in our bisexual identity but the world bases our identity on who we are with at any one time,” he says.

“The society demands either or, choose a side, you are with us or against us ways of being from people. For those of us who don’t fit into that binary there is a lot of hostility, frustration, and anger … it makes being comfortable in one’s own skin a revolutionary act.”