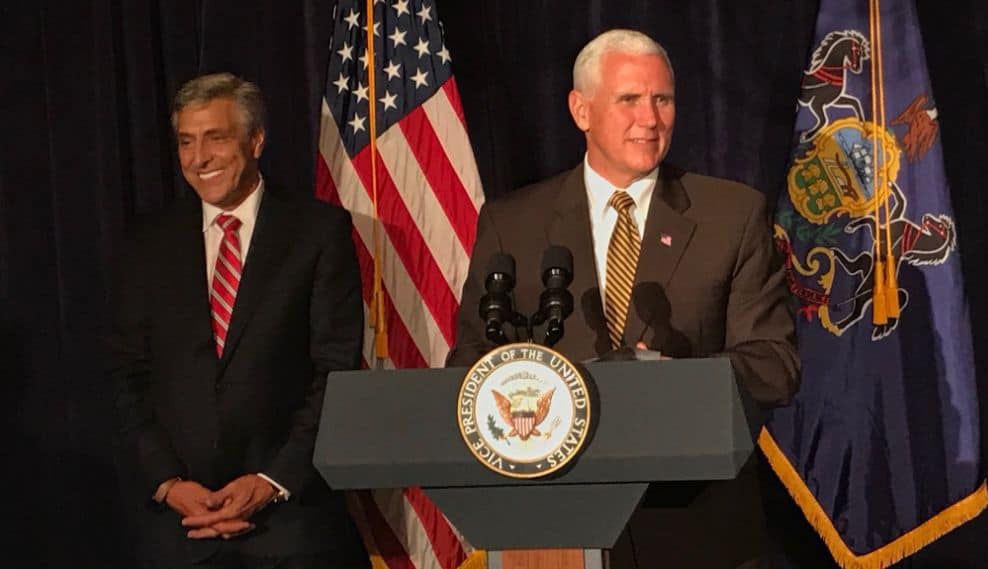 On Tuesday, Vice President Michael Pence made a surprising stop in Pennsylvania.

It seems the VP is campaigning hard for Congressman Lou Barletta, who is running for the Senate of that state. Pence took a trip to Philadelphia, and hosted a fundraiser for Barletta, the GOP candidate.

Pence spoke before an estimated audience of three hundred people in the Sheraton Hotel. He called Barletta “a friend.”

According to Delaware Online, “Barletta faces an uphill battle against Democratic incumbent U.S. Sen. Bob Casey, who’s better known and has nearly $10 million in his war chest, more than seven times Barletta’s tally of $1.3 million, according to the most recent campaign finance reports.”

Barletta will likely face off against LGBTQ-friendly Bob Casey, a Democrat and the current senior senator from the Keystone State.

But Barletta isn’t any old representative. In community circles, Barletta is known for being anti-LGBTQ; it makes sense that he’d get along together well with Pence.

Both men have a long history opposing equal rights for marginalized Americans.

After Obergefell, Barletta made several public statements asserting that the Court had no business defining what a marriage was or wasn’t.

In this regard, he agreed with Pence; Barletta also had made comparable comments when equal marriage was made legal in Pennsylvania, back in 2014.

Barletta has dismissed the concerns of trans troops serving in the armed forces. He backed the Administration’s policies, stating that the system should make the decision.

A 2016 amendment was proposed which would have banned federal contractors from policies of employment discrimination with regards to gender identity or sexual orientation. Barletta opposed it.

The Pence-Barletta fundraiser was met outside by hundreds of protesters.