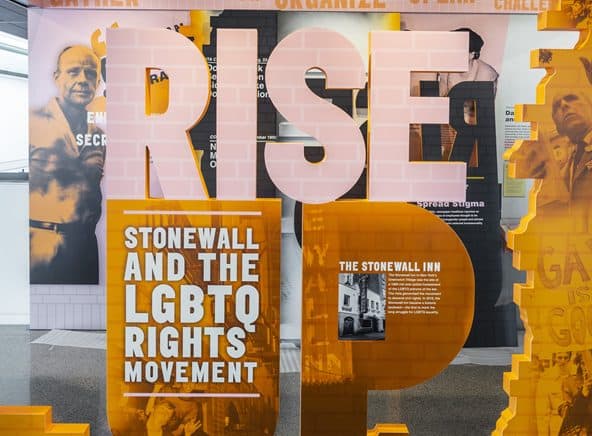 Newseum, an interactive museum highlighting the importance of free press and the First Amendment located in Washington, D.C., has opened a groundbreaking exhibit to mark the 50th anniversary of the Stonewall Inn riots.

On Friday (March 8), Newseum opened the doors of its new exhibit, “Rise Up: Stonewall and the LGBTQ Rights Movement.” The “Rise Up” exhibit explores the gay rights movement and the role the raid of Stonewall Inn in New York’s Greenwich Village in 1969 had in acting as a catalyst for the modern gay liberation movement.

This exhibit has been in the works for about a year and a half, Patty Rhule, the vice president of content and exhibit development at the Newseum, told the Washington Blade. However, she says the exhibit was easy to execute because of the enthusiasm surrounding the exhibit.

“I think people were excited,” Rhule said. “There’s a lot of excitement around this anniversary… and people were excited that we were planning such a big exhibit on this topic. Everybody we reached out to seem enthused about the idea.”

The exhibit explores important moments of LGBTQ history, like the assassination of Harvey Milk, one of the country’s first openly gay elected officials, in 1978; the AIDS crisis, featuring a panel of the AIDS quilt, ACT UP newspapers, and mainstream coverage of the epidemic; the coming out of Rep. Barney Frank in 1987; the efforts for hate crime legislation; both the implementation and repeal of “Don’t ask, don’t tell;” and the fight for the legalization of same-sex marriage.

Featured in the exhibit are the madras sport coat Jim Obegrefell got married in, a red suit worn by U.S. Sen. Tammy Baldwin, and the sewing machine which Gilbert Baker used to make the first rainbow flag. Some notable LGBTQ media outlets – including the Washington Blade; The Ladder, a lesbian publication that ran from 1956-1972; and Frontiers, a now-closed LA LGBTQ publication, will also be featured.

“Rise Up” also examines the influence of popular culture on public attitude on the LGBTQ community through film, television, sports, and music while exploring how the LGBTQ liberation movement utilized the power of public protest and demonstration.

Maeve Scott, the Newseum’s director of collections and registrar, told the Washington Blade that she hopes visitors of the exhibit will leave inspired.

“A lot of these people were just everyday people who used their First Amendment rights to enact change,” she said. “If this group did this, other groups can as well, and this is not the end of the story.”

The “Rise Up” exhibit will run until the end of the year (December 31, 2019) and then will travel nationally afterwards.