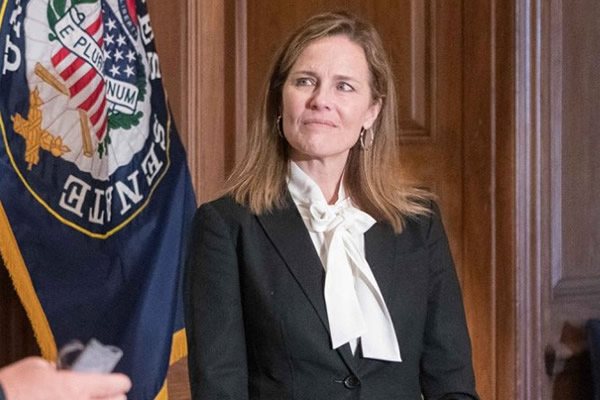 Why Does Website Say Coney Barrett Worked at Anti-LGBTQ Firm Earlier than She Disclosed?

Amy Coney Barrett, whom President Trump has nominated to replace the late Ruth Bader Ginsburg on the U.S. Supreme Court, has admitted to accepting speaking fees from the anti-LGBTQ legal firm Alliance Defending Freedom — but the group’s website suggests she had ties to the group that were broader and earlier than she previously disclosed.

Although the legal firm insists Barrett’s previous disclosures were “entirely accurate and complete” and the webpage in question was retroactively updated to include her work at a later time, Barrett is likely to face questions about whether it reflects she wasn’t truthful about her work with Alliance Defending Freedom, as well as her ties to the anti-LGBTQ legal firm generally, when she comes before the Senate Judiciary Committee next week.

According to the webpage, which was still posted on Alliance Defending Freedom’s website as of Friday, Barrett was a “past faculty member” for the Blackstone Legal Fellowship, which is operated by the ant-LGBTQ legal firm and seeks to inspire in students a “distinctly Christian worldview in every area of law.” The date on that webpage is Jan. 1, 2009, which is earlier than the time period of 2011 and 2017 when she admitted to having a total of five speaking engagements with the fellowship.

Barrett didn’t disclose any work with Blackstone to the Senate Judiciary Committee prior to 2011 when Trump previously nominated her three years ago for a seat on the U.S. Seventh Circuit Court of Appeals. Moreover, the suggestion Barrett was a “past faculty member” appears broader than her work as a past speaker with the fellowship as she disclosed at the time to the committee, although that could be splitting hairs.

Bolstering the evidence Barrett had a broader role at the Blackstone Legal Fellowship than she previously disclosed in 2017 is a contemporaneous article in the Daily Signal, which is run by the conservative Heritage Foundation, on the exchange she had during her confirmation hearing with Sen. Al Franken (D-Minn.).

“Barrett, a Catholic, taught constitutional law to students accepted for ADF’s summertime Blackstone Legal Fellowship, which she testified she had heard about from colleagues and law students she respects,” the article says.

But, according to ADF, any conclusion Barrett wasn’t untruthful in previous testimony based on that webpage is incorrect. Although the webpage was dated Jan. 1. 2009, an ADF spokesperson said it was updated subsequently to reflect Barrett’s work as a speaker beginning in 2011, but kept the same date when it was originally posted.

“The information that Judge Barrett provided in her Senate Judiciary Questionnaire about her presentations at the Blackstone Legal Fellowship was, to our knowledge, entirely accurate and complete,” an ADF spokesperson said. “The first time that she spoke at Blackstone was in 2011. The date on the webpage you referenced represents when the page was first published. We subsequently edited information to add new speakers who presented at Blackstone in later years. Judge Barrett was one of several speakers who were added later.”

Evidence supporting Alliance Defending Freedom’s claim the webpage was updated at a later time is the inclusion on the list of Kyle Duncan, now a judge on the U.S. Circuit Fifth Court of Appeals. The webpage designates him as general counsel for Becket Law, but he didn’t hold that position until 2012, well after the 2009 date on the webpage.

The Heritage Foundation didn’t respond to repeated requests from the Blade to comment on why the Daily Signal article states she taught constitutional law for Blackstone’s summertime program when the issue Franken and Barrett discussed was speaking fees, nor did Alliance Defending Freedom respond to a follow-up email on whether characterizing Barrett’s work as a past faculty member indicates she had broader work than the speaking engagements she disclosed.

If Barrett failed to disclose in 2017 any work with Alliance Defending Freedom, it would be consistent with a flurry of recent news reports on work Barrett had failed to report to the Senate Judiciary Committee. As widely reported this week, Barrett was among the signatories of a 2006 newspaper ad that was against abortion access and called Roe v. Wade “barbaric,” yet she failed to disclosed that in material to the Senate Judiciary Committee.

On Friday, NBC News’ Heidi Przybyla also reported Barrett failed to include on her Senate Judiciary disclosure forms a notable case in which she was one of two lead attorneys defending a Pittsburgh steel magnate accused of helping drive a major Pennsylvania Hospital System into bankruptcy. On the same day, CNN’s Andrew Kaczynski and Em Steck reported Barrett failed to disclose two talks she gave in 2013 hosted by two anti-abortion student groups where she taught at University of Notre Dame law school on paperwork provided to the Senate ahead of her confirmation hearing to become the next Supreme Court justice.

Even based on her admitted work with Alliance Defending Freedom, Barrett has faced criticism for her ties to the anti-LGBTQ group, including in the exchange she had in 2017 with Franken, who questioned her about taking two $2,100 payments in speaking fees from the organization.

Under scrutiny by Franken, Barrett initially said she wasn’t aware of Blackstone’s mission or its affiliation when she agreed to speak to the legal fellowship in 2011.

“I’m invited to give a lot of talks as a law professor and it is not — I don’t know what all of ADF’s policy positions are and it’s never been my practice to investigate all of the policy positions of a group that invites me to speak,” Barrett said.

Barrett added she wasn’t aware of Blackstone’s affiliation with the Alliance Defending Freedom until she “received the honorarium and saw the ADF on the check,” then said she didn’t remember exactly when she found out, then said “by the time I spoke, she was aware” Blackstone was affiliated with Alliance Defending Freedom. All in all, she gave a total of three explanations under Franken’s questioning.

Alliance Defending Freedom, which operates Blackstone, has been a leading law firm seeking to halt the advancement of LGBTQ rights or roll them back, often in the name of “religious liberty.” This year alone, the legal group represented Harris Funeral Homes in Michigan, which fired funeral director Aimee Stephens for being transgender, in a case that reached the U.S. Supreme Court, which ultimately ruled terminating her because of her gender identity was illegal under Title VII of the Civil Rights Act of 1964.

The anti-LGBTQ legal firm also represented Jack Phillips, the owner of Masterpiece Cakeshop who asserted a First Amendment right to refuse to make a custom-made wedding cake to same-sex couples despite the non-discrimination law in Colorado. The Supreme Court took up the case and issued a narrow ruling for Phillips, determining the Colorado Civil Rights Commission harbored anti-religion bias in adjudicating his case.

Alliance Defending Freedom also submitted an amicus brief in 2015 before the Supreme Court against same-sex marriage, arguing “same-sex couples cannot advance the states’ legitimate interest to encourage childrearing by both biological parents.” (John Bursch, who argued in favor of state bans on same-sex marriage before the Supreme Court as Michigan solicitor general, later argued on behalf of Alliance Defending Freedom before the court in the Harris Funeral Homes case.)

The anti-LGBTQ legal firm has also had a hand in state legislation intended to allow discrimination against LGBTQ people in the name of religious freedom and measures prohibiting transgender people from using the restroom consistent with their gender identity. Going back further, the legal firm filed an amicus brief in favor of state laws criminalizing same-sex relations in the Lawrence v. Texas case before the Supreme Court in 2003, and filed an intervention before the European Court of Human Rights in 2015 against allowing transgender people to change the gender marker on their IDs without undergoing gender reassignment surgery leading to sterilization.

On that basis, Franken said during Barrett’s 2017 confirmation hearing the legal firm “supported the recriminalization of homosexuality” and “has defended state-sanctioned sterilization of transgender people,” in addition to linking homosexuality to pedophilia and “claiming a homosexual agenda will destroy Christianity and society.” The Southern Poverty Law Center, as Franken noted, has labeled the anti-LGBTQ legal firm a hate group.

Barrett, however, challenged the idea labelling Alliance Defending Freedom was accurate in her 2017 responses to Franken during the Senate Judiciary Committee, backing that up by saying a reputable international law firm had represented the law firm before the Supreme Court.

Although Franken chided Barrett for stating she has a practice of accepting speaking fees from Alliance Defending Freedom without knowing more about it, the issue wasn’t enough to sink her confirmation in 2017.

The Senate confirmed Barrett to the Seventh Circuit by a vote of 55-43 amid criticism from social conservatives that Senate Democrats inappropriately held Barrett’s faith against her, including Sen. Dianne Feinstein (D-Calif.), who told Barrett “the dogma lives loudly within you, and that is a concern.”

Alliance Defending Freedom’s legal positions would be consistent with the personal views expressed by Barrett, who in 2015 co-signed a letter with other Catholic women to religious leaders affirming marriage is between a man and a woman and the sexual difference between men and women was significant, and called the Obama administration interpreting transgender protections under Title IX of the Education Amendments of 1972, which bars discrimination on the basis of sex in education, a “strain” on the statute.

Feinstein, top Democrat on the Senate Judiciary Committee, issued a statement Thursday warning Barrett would be a threat to LGBTQ rights if the Senate confirmed her to the Supreme Court.

“In recent years we’ve seen unprecedented gains in the recognition of Constitutionally protected rights for the LGBT community, thanks largely to the Supreme Court,” Feinstein said. “Five years ago, in Obergefell v. Hodges, the court found that the Constitution protects the right to marriage equality. And just four months ago, the court confirmed that Title VII’s protection against employment discrimination includes LGBT workers. But, this progress is in jeopardy if Republicans are successful in rushing through the confirmation of a conservative justice.”

Barrett’s personal views on LGBTQ rights, as well as her ties to Alliance Defending Freedom, will likely come into focus during her confirmation hearing next week before the Senate Judiciary Committee, in addition to questions on whether she’d overturn Roe v. Wade or marriage equality after an unexpected statement from U.S. Associate Justices Clarence Thomas and Samuel Alito this week declaring war on the 2015 Obergefell decision.

White House Deputy Press Secretary Judd Deere, in response to the Blade’s inquiry on the material on the Alliance Defending Freedom’s website, said Barrett has drawn a distinction between her personal views and her approach to the law.

“Judge Barrett has said that as a judge she’s not a policymaker and that it’s not appropriate for her or any judge to follow their personal convictions in deciding a case, which is also one of the many reasons President Trump laid out as to why he selected her as his nominee to the Supreme Court,” Deere said.

Barrett didn’t respond to a request to comment for this article in response to an inquiry to the email account she holds as a law professor at University of Notre Dame in South Bend, Ind.