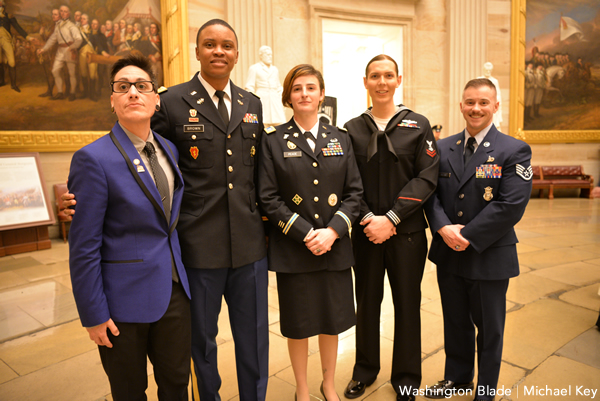 The U.S. Navy has granted the first-ever waiver under President Trump’s transgender military ban to an individual who had sued to remain in the service. The news was first reported by CNN.

The waiver was granted to the Jane Doe in the case against the transgender military ban filed in March by GLBTQ Advocates & Defenders and the National Center for Lesbian Rights. The anonymous Navy officer had served two extended tours of duty over nine years and faced discharge because she’s transgender.

Jennifer Levi, transgender rights project director for GLAD, confirmed in a statement the waiver was granted to her client,

“The ban has been in place for over a year and this is the first waiver to be granted,” Levi said.”While we are relieved that our client, a highly qualified Naval officer, will be able to continue her service, there are other equally qualified transgender service members who have sought waivers and are still in limbo, despite being perfectly fit to serve.”

Lt. Brittany Stephens, a Navy spokesperson, confirmed to the Washington Blade via email the waiver was granted.

“The acting secretary of the Navy has approved a specific request for exemption related to military service by transgender persons and persons with gender dysphoria,” Stephens said. “This service member requested a waiver to serve in their preferred gender, to include obtaining a gender marker change in Defense Enrollment Eligibility Reporting System (DEERS) and being allowed to adhere to standards associated with their preferred gender, such as uniforms and grooming.”

The transgender military ban, enacted after Trump tweeted in 2017 he’d ban transgender people from the military “in any capacity,” requires the discharge of any service member diagnosed with gender dysphoria and bars the enlistment of any individual who has received transition-related care.

But the policy has an exemption to allow transgender service members to continue serving if they came out when open service instituted in 2016 under the Obama administration. Additionally, the policy allows senior defense officials to grant waivers to transgender individuals facing discharge wishing to enlist in the armed forces.

Transgender advocates have said these carve-outs to the military ban are insufficient and policy should be scrapped entirely in favor of open service.

Shannon Minter, legal director for the National Center for Lesbian Rights. said in a statement “no one else has to obtain in order to continue to serve.”

Aside from Doe’s lawsuit, four other challenges to the transgender military ban are pending in federal courts throughout the country. The U.S. Supreme Court, however, allowed the Trump administration to move forward with the ban as the litigation moves forward.

Peter Perkowski, legal and policy for Modern Military Association of America, is overseeing one lawsuit pending before the U.S. Ninth Circuit Court of Appeals, Karnoski v. Trump, and said the Navy’s decision to grant a waiver will aid the case against the ban.

“The Navy’s decision to approve a waiver to the Trump-Pence transgender military ban is an important victory for this Sailor, even if we suspect the administration may be nefariously planning to misuse it to undermine our lawsuit challenging the ban,” Perkowski said. “We will be watching closely to see if others are approved and how the Trump-Pence administration may attempt to weaponize the decision by falsely claiming the ban isn’t a ban.