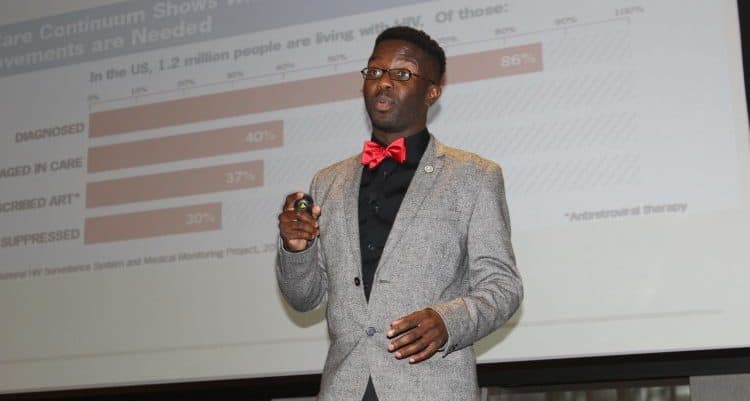 Daniel Driffin’s face has a special glow to it these days.

That’s because he, Dwain Bridges and Larry Walker are now East Point homeowners — but the house isn’t for them. It’s for HIV-positive men and transwomen who need a place to get back on their feet.

“One of the determinants of whether or not someone will be healthy [living with HIV] is the determinant of safe and adequate housing. From the beginning of the organization, we always wanted to be able to provide black gay men, or even transgender women, a safe place should they need temporary housing,” Driffin said.

Driffin, Bridges and Walker co-founded THRIVE SS, which stands for Transforming HIV Resentment Into Victories Everlasting Support Services, in 2015. It’s an Atlanta nonprofit geared toward helping black gay men with HIV get the health care they need. THRIVE House is the latest innovation in their mission.

THRIVE House will serve as a “transitional opportunity house” for HIV-positive individuals who need help getting back on their feet.

“This truly is a result of what the HIV epidemic looks like in Atlanta, and also the nation. The only rising group at risk, or groups contracting HIV consistently has been young, black gay men and young black transgender women,” Driffin said.

In 2014, according to the Centers for Disease Control and Prevention, Atlanta had the fifth-highest rate of new HIV infections in the US, and recent numbers show “the 2.1 percent prevalence rate found in urban poverty areas in the US exceeded the 1 percent cut-off that defines a generalized HIV epidemic and is similar to the rates found in several low-income countries.” CDC data also indicate that HIV rates are greater based on poverty level and race.

“Housing, access to care and employment have always been the big three that truly keep people out of care and serve as barriers. Putting our heads together, we wanted to tackle one of the barriers, and that is going to be housing in this program,” Driffin said.

To his knowledge, Driffin said there isn’t anything quite like THRIVE House in the South. There are shelters for LGBT youth, and shelters for homeless adults, but many are not geared specifically toward those at highest risk for HIV. Driffin said one reason housing was a barrier to thriving with HIV goes back to Maslow’s Hierarchy of Needs. He said providing food, shelter and help with income could set HIV-positive individuals “on a different trajectory.”

“If you don’t have someplace safe to sleep at night, everything else is going out the window. It’s not going to be truly important, or it may not be as important, to be linked to medical care being that your basic things are not being met,” Driffin said. “Even still today, many people who are in medical care, and especially if they’re taking medications for HIV, they may be on a regimen that ties to having someplace to keep their meds safe.”

Potential residents fill out an application, provide proof of income and meet with a THRIVE SS representative to determine if they are a good fit for the house or not.

“We really foresee the house fitting anywhere from three to five folks, truly depending on their individual need, whether it’s an emergency place to stay overnight to a more semi-longer term,” Driffin said.

He said longer-term support would be up to five months, during which residents will search for permanent housing and become more financially stable. Each resident will also have a weekly case management session, doing things like speaking with counselors or creating a strong résumé. On a case-by-case basis residents may be asked to put a portion of what they make toward rent.

“Not having someplace to sleep at 5:00 is scary in Atlanta. We really are going to do our due diligence to take that barrier away when it comes to having someplace you can lock the door and go to sleep and not have to wake up in the morning and wonder about whether or not your identification or medication will be stolen,” Driffin said.

The house was a gift from one of THRIVE SS’ donors about a year after the organization kicked off, and it began accepting residents earlier this month.

“We were in there [on a ] Friday night beginning to paint all the rooms. We repainted the bathrooms, the kitchen and started making the asks within the community. Instantly people began to email us specifically donating the different services they could assist us with,” Driffin said.

Donors brought THRIVE House its washer and dryer, most of its furniture, even paper products. Driffin said people who still want to be involved can do so either with in-kind or monetary donations.

To make a donation to THRIVE House, please visit www.thrivess.com.