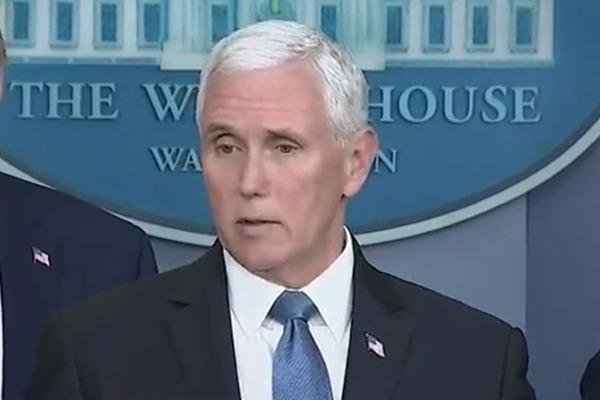 In defense of his role in overseeing coronavirus efforts within the Trump administration, Vice President Mike Pence downplayed on Saturday his responsibility for the HIV outbreak that occurred under his watch as Indiana governor.

Pence, responding to a question from journalist Andrew Feinberg during a White House news conference with President Trump, said the outbreak was a result of Indiana not allowing needle exchanges, which have been shown to reduce new HIV infections dramatically.

“We had an outbreak of HIV in a very small town that emerged in early 2015,” Pence said. “My health officials came to me. We immediately deployed health resources. The truth was HIV/AIDS was being spread by people sharing needles and intravenous drug use, and the state of Indiana did not allow for providing a needle exchange to citizens.”

Pence added the Centers for Disease Control & Prevention came to Indiana and made a recommendation, which he said led to him declaring a health emergency making for 30 days a needle exchange available in the state of Indiana.

“I’m proud to say that every one of those patients was treated, [and] we ended the spread of the HIV/AIDS virus,” Pence said.

Scrutiny on Pence’s responsibility for the HIV outbreak grew this week after Trump made him head coordinator for U.S. coronavirus efforts, saying Indiana had been a model for health administration. (Satirizing Pence’s appointment, the Daily Show’s Trevor Noah proclaimed in a segment recalling the HIV outbreak, “We’re definitely all going to die!”)

Trump defended Pence’s record in response to the question on Saturday, insisting Indiana “has been an absolute leader” on health care as a result of the vice president’s work the state was “one of the best, if not the best in the country.”

A Huffington Post article on Pence’s oversight of the HIV outbreak written in 2016 and updated this week tells the story differently from the vice president.

According to the article, after the Indiana legislature approved a Pence-backed measure to defund Planned Parenthood in 2011, the clinic affiliated with the organization in Scott County was forced to shut down two years later. Scott County is a low-income rural area in central Indiana where drug injection was as a result of prescription opioid use.

Years later in 2015, local health officials began to report HIV cases linked to intravenous prescription opioid use in Scott County. The determination was Scott County were sharing needles and not getting tested for HIV.

The situation quickly escalated. At the height of the outbreak, 20 new HIV infections were diagnosed each week and reached a total of nearly 200 cases by the time the outbreak was finally under control, according to the Huffington Post.

Although a government needle exchanges would help address the outbreak, Pence reportedly “dragged his feet” because opposed the idea. The outbreak was initially reported in January 2015, but it took Pence until April 2015 to declare the emergency allowing government-backed needle exchanges.

Pence also addressed in response to the question Saturday his oversight of a MERS infection as Indiana governor. The vice president called MERS “an infectious disease much more deadly than the coronavirus.”

“It was then when I was governor, I learned of the extraordinary capabilities of CDC, worked with my health officials in the state of Indiana, worked with federal officials and, maybe most importantly, learned the invaluable role that local health officials play in dealing with the spread of infectious disease,” Pence said.

According to Pence, the state of Indiana secured the patient with MERS, found out other the individuals with whom the patient was in contact and concluded “there were no additional infections and that patient recovered and there was only other MERS disease.”

Pence concluded he takes the experience of oversight over the HIV outbreak and MERS infection as Indiana governor as part of his duty overseeing coronavirus efforts.

“I think my experience as a governor, dealing with two different infectious disease and seeing the vital role health care providers play, and federal officials play, has really informed me,” Pence said.

That’s why, Pence said, he’s spent time talking to governors about coronavirus efforts, pointing out a conversation he had yesterday with state health officials and Florida Gov. Ron DeSantis.

“And I’m proud of the work that we did in the state of Indiana, and I hope to continue to bring all of the best minds together to deal with this issue,” Pence concluded.

Trump interjected by saying Pence is “doing a great job” and that was a “great answer” to the question.

Democratic presidential candidate Pete Buttigieg, who was serving as South Bend mayor in Indiana at the time of the outbreak, criticized Pence for his handling of the HIV outbreak Thursday during a CNN interview.

“I’ve been to the needle exchange that he reluctantly authorized,” Buttigieg said. “He was dragged kicking and screaming into that. Had he acted earlier, I believe that the worst parts of that HIV epidemic could have been avoided.”

Lucas Acosta, a spokesperson for the Human Rights Campaign, said Pence’s account of the HIV outbreak in his state is “patently false.”

“In actuality, Mike Pence failed Hoosiers, keeping his head in the sand and denying evidence-based science while failing to deliver the swift and strong response Indiana needed, costing the state millions and changing the lives of hundreds,” Acosta said.