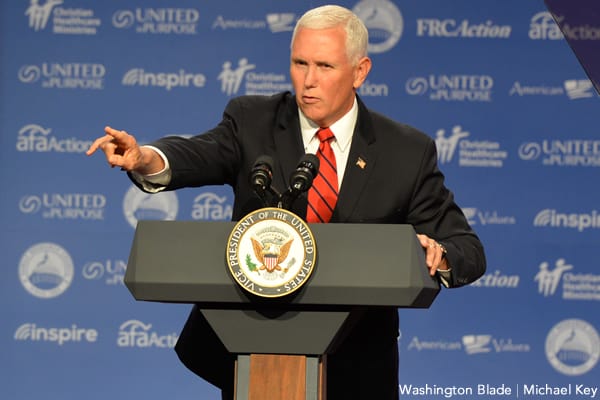 Telling the audience the Trump administration “understand[s] the role that communities of faith play in adoption,” Pence invoked the proposal, which was unveiled late last month to the consternation of advocates for LGBTQ families.

“We’ve reversed the rule implemented in the closing days of the last administration that jeopardized the ability of faith-based providers to serve those in need by penalizing them for their deeply held religious beliefs,” Pence said. “We will stand for the freedom of religion and we will stand with faith-based organizations to support adoption.”

Pence, who has become the symbol of regression on anti-LGBTQ rights in Trump administration, said he “couldn’t be more proud” of the rule, which he said was taken at President Trump’s direction with “decisive action.”

“And I want to commend Secretary Azar and the team here at HHS for promulgating the new rule that respects the freedom of religion of every American, but also recognizes the vital role that faith-based organizations play in adoption in this country,” Pence added.

Pence said four out of five families point to faith and church support as factors in successful fostering and “countless families rely on their faith communities as they adopt and incorporate children into their lives.”

“And I’ll make you one more promise: Child welfare providers will never be forced to choose between their faith and serving those in need — not on our watch,” Pence concluded.

The proposed HHS rule seeks to reverse an Obama-era regulation implemented in December 2016, just before the start of the Trump administration, barring recipients of federal grants from discriminating on the basis of sexual orientation or gender identity.

Although faith-based adoption agencies, many of which have been clamoring for a change in the rule suing the U.S. government on the basis it violates freedom of religion, are a prominent example of grantee that would be able to discriminate under the rule change, LGBT advocates said the proposal would have far-reaching implications, including health care faculties that receive federal funds.

Among those condemning the proposal was Democratic presidential candidate Pete Buttigieg, who told the Washington Blade on his campaign bus in Iowa the proposal is a “huge step backwards.”

Pence also made a veiled criticism of abortion rights in his speech, saying “there’s roughly the same number of couples experiencing infertility — infertility in this country than there are abortions.”

The implication was clear from Pence he thinks women who choose to have abortions should instead have those children and give them up for adoption.

“Literally, year after year, the number of families that struggle with unexplained infertility is roughly equal to the number of abortions,” Pence said. “And so, I truly do believe as we stand without apology for the sanctity of life, we must stand for and expand access to adoption in America. That’s how we make progress, by putting families together.”

“Trump and Pence relentlessly marginalize LGBTQ people and attempt to erase our existence,” David said. “Their disturbing worldview extends into the adoption and foster care systems, where they support giving federally-funded foster and adoption agencies a license to discriminate against LGBTQ children and prospective parents, religious minorities and other vulnerable groups.”

An estimated 440,000 children are currently in the foster care system in the United States, and more than 123,000 kids are now available for adoption.