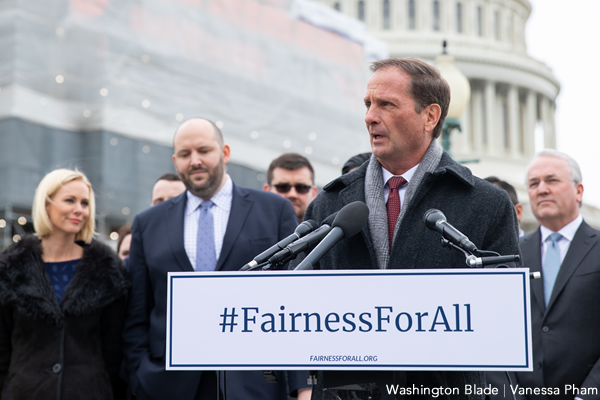 Chris Johnson, Washington Blade courtesy of the National LGBTQ Media Association
News
September 14, 2021
Fifty-seven percent of Americans support a bipartisan deal to reach a compromise on religious freedom and LGBTQ rights, according to new polling shared with the Washington Blade in advance of publication.

With no hope in sight for the Equality Act — legislation to expand the prohibition on anti-LGBTQ discrimination under federal law — the poll suggests a compromise alternative, such as the Fairness for All Act, might be the way to go. The poll was sponsored by Alliance for Lasting Liberty, an organization that advocates for a solution along those lines.

The poll finds supermajorities of Americans expressed strong support for LGBTQ rights across the board, including in health care, homeless shelters and employment. Around three-fourths of Americans polled affirmatively for each on whether they were against anti-LGBTQ discrimination in all areas protected by civil rights laws.

At the same time, the poll found a majority of the public supports religious freedom. For example, 55 percent of respondents said religious schools should be able to have religious codes of conduct, while 54 percent said they shouldn’t be denied tax-exempt status over views on marriage and sexuality.

The poll also found a majority of Americans — 57 percent — support a bipartisan solution to resolve the issue of religious freedom and LGBTQ rights. Meanwhile, 63 percent say they’d vote for a lawmaker who supports religious freedom, compared to 57 percent who say they’d vote for a politician who supports LGBTQ rights legislation.

Another point of interest is a question on whether Congress and the courts should be the ones to resolve where the line should be drawn on LGBTQ rights and religious freedom. A plurality of 47 percent said they support having lawmakers address the issue as opposed to the courts, compared to the 15 percent who say they oppose it.

The polling comes out on the day a virtual panel was scheduled to take place with religious leaders making the case for a compromise on religious freedom and LGBTQ rights. Notable among the speakers is Walter Kim, a theologian who last year became president of the National Association of Evangelicals — a group of denominations and institutions not known for their support for LGBTQ rights.

Other speakers are Rev. Marian Edmonds-Allen, an executive director of Parity, a NYC-based national non-profit that works at the intersection of faith and LGBTQ concerns; Shirley Hoogstra, president of the Council for Christian Colleges & Universities; and Justin Giboney, president of the AND Campaign, a Christian civic organization made up of influential Black clergy.

Online registration for the virtual panel, set to begin Monday at 10 am, is here: https://us02web.zoom.us/webinar/register/WN_wO07CXkCT6yIwfAt37laNg

The poll was conducted by APCO Insight in the form of nationally representative survey of 1,000 Americans about their opinions on LGBTQ civil rights and religious freedom. The online survey was conducted from July 22-23 and has a confidence interval of plus-or-minus 3.1 percentage points.