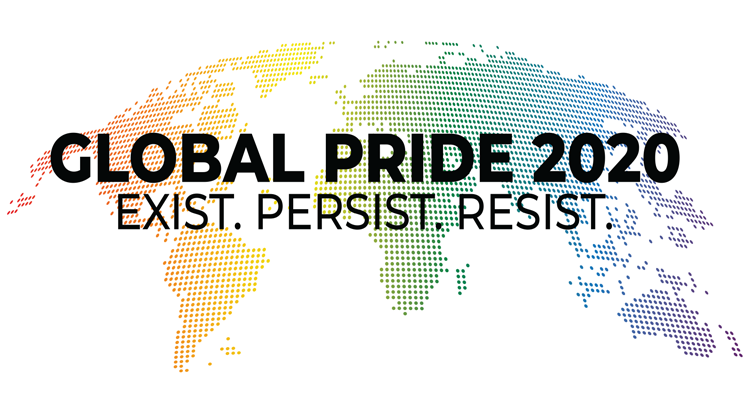 It comes as no surprise that 2020’s Pride month looks a little different from years before. With the COVID-19 pandemic still raging on, some of the biggest and most well-known Pride celebrations around the country are going online. While the country continues to learn and adapt to the COVID-19 way of life, LGBTQ Pride is still as strong as ever. Major cities like Chicago, New York City, Washington, D.C., and San Francisco are opting for a virtual Pride experience, and Pride organizers worldwide are even coming together for one huge event. Spirits may be low, but we can feel more connected than ever by tuning in to some of the most famous Pride celebrations in the nation without even leaving the couch.

On Saturday, June 27, Pride organizers across Europe, the Americas, Asia, and southern Africa will come together for the first-ever Global Pride, a massive 24-hour livestreamed event. You can expect musical performances, speeches, and key messages from human rights activists.

“Global Pride will show the LGBTQIA+ movement for the very best it can be, showing solidarity at a time when so many of us are mourning and strength when so many of us are feeling isolated and lonely,” Kristine Garina, President of the European Pride Organisers Association, said in a release. “Above all, we will show our resilience and determination that Pride will be back bigger and stronger than ever before.” Learn more at globalpride2020.org.

On Sunday, June 28, from noon to 2pm, NYC Pride will host a Special Pride Broadcast Event to celebrate the 50th anniversary of its first Pride march. The event will feature performances by Janelle Monáe, Billy Porter, Deborah Cox, Luísa Sonza, and more, and it will be guest co-hosted by Carson Kressley. You can expect to see appearances by Wilson Cruz, Miss Richfield 1981, Margaret Cho and others, and grand marshals Dan Levy, the Ali Forney Center, Yanzi Peng, and Victoria Cruz—as well as frontline workers—will also be honored. Learn more at nycpride.org.

San Francisco Pride will be ditching a traditional, in-person Pride for a two-day online extravaganza. The Online Celebration and Rally will occur on Saturday, June 27 from 1–9 pm and Sun, June 28 from 2–7 pm. Little information has been revealed about the event, but you can expect live and pre-recorded performances; greetings from LGBTQ community members, elected officials, and celebrities; speeches from thought leaders; drag and dance performances; DJ sets; and more. Learn more at sfpride.org.

In lieu of the traditional Pride events, Capital Pride is celebrating Pride virtually all month long. One of the most innovative of Capital Pride’s programming is the first-ever Pridemobile Rainbow Blast, where on
June 13 the Pridemobile will drive around the city to document how residents are showing they have pride and entertain the neighborhoods with beats from local DJs and performances from local drag performers.

As for the online programming, Capital Pride will produce a web series called Pride in the City. Available on Facebook and YouTube, the series will introduce viewers to important people and places in the nation’s capital. The first episode, which airs June 14, will celebrate the diverse and unique talent Washington, D.C. has to offer. They will also offer a Sunset Dance Party the same day at 8pm and Pride Talks with leaders from LGBTQ organizations streamed live on social media. For more information, visit capitalpride.org.

The Chicago Pride Fest will mark its 20th anniversary with a two-day livestreamed festival on June 20 and 21 from 7–9pm that will celebrate “the love, life, and diversity of Chicago’s LGBTQ community,” according to its organizer, the Northalsted Business Alliance. The event, which will stream via Twitch, will include a lineup of entertainment, activism, and special greetings. The festival will also act as a fundraiser for community outreach. Specific programming will be announced later this month at pridefestchicago.com and virtualchicagopride.com.

As per usual, Atlanta’s Pride festival will not be celebrated until October, and Atlanta Pride organizers are continuing on with the planning of the event. In the meantime, Atlanta Pride offered a slew of digital events last month, including virtual Drag Queen Story Hours with Miss Terra Cotta Sugarbaker, Netflix watch parties in partnership with Out On Film, and digital DJ sessions. The Atlanta Pride Committee (APC) will continue to offer digital events throughout Pride month, so keep an eye out for programming as it is announced via atlantapride.org or on APC’s Facebook page.